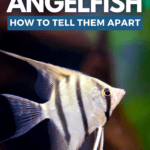 Freshwater Angelfish are beautiful creatures that can bring elegance and charm to any aquarium. But how can you tell the difference between male and female Angelfish?

Are male Angelfish aggressive? Do female Angelfish make a better option for a peaceful community tank? Are both sexes the same when it comes to color and form? And what does a dither fish have to do with breeding Angelfish?

In this guide, we compare male vs. female Angelfish, so you have a clear idea of what you’re looking for when you buy your fish.

What’s The Difference Between Male and Female Angelfish?

In female fish, the tube is noticeably much thicker than in the male. However, that difference doesn’t become evident until the fish are spawning.

Before we dive into the characteristics of each Angelfish gender, it’s important to know that determining the gender of these fish is impossible when the Angelfish are juveniles.

Generally, Angelfish reach sexual maturity once they reach around six or seven months of age when the fish begin to form pairs. Even then, it can be difficult to tell the difference between the sexes.

However, look closely, and you might be able to see the following differences:

Let’s look at the male of the species first:

And how about the female’s physical characteristics?

As well as differences in their appearance, male and female Angelfish exhibit some variations in their behavior, too. That makes it crucial that you understand how the two sexes interact with other species and with each other if you’re planning on setting up a community tank.

The most obvious behavioral difference between the two sexes is that the males are much more territorial than the females, especially during spawning seasons. That aggression can be directed at other male Angelfish or male fish of totally different species.

In comparison, female Angelfish generally only become territorial when guarding their young.

Because of the male Angelfish’s tendency to be aggressive, you must choose his tank mates very carefully.

Avoid fin nippers and other aggressive or semi-aggressive fish species. Focus instead on peaceful fish that will mind their own business, such as Corydoras, Platies, Swordtails, Plecos, and Kuhli loaches.

Since female and male Angelfish are very similar to look at, it’s perhaps simpler and less hassle to try to choose female Angels if you want to keep a community tank.

To read a full guide to the best tank mates for Angelfish, check out the article at this link.

Keeping Male and Female Angelfish Together

Angelfish are such a beautiful species that many hobbyists decide to try to breed from their pets. But can you keep male and female Angelfish together safely?

Usually, it’s only male Angels that are territorial and become aggressive when choosing a mate. Sometimes, the male will chase the female during spawning, but that’s normal courting behavior and doesn’t generally end in conflict.

However, if you have other female Angelfishes in your tank, it is possible that the male will attack them to protect the eggs and fry.

Breeding Angelfish in the home tank is perfectly feasible, as long as you provide them with the water parameters they prefer and feed them a high-quality, nutritious diet.

I once successfully bred Koi Angelfish in my community aquarium, although choosing a male and female that decided to form a breeding pair was sheer luck. Angelfish can be very picky when it comes to choosing a mate. Usually, you can’t just put one fish of either sex together and expect them to get along; Angelfish prefer to choose their own mates!

However, if you’re keen to breed Angelfish, the easiest way to get a breeding pair is to buy a group of juvenile specimens and keep them together. As the fish mature and reach breeding age, they will pair off naturally.

Angelfish prefer to spawn in a tank without other fish to hassle or stress them. So, you need to set up a spawning tank, specifically for the breeding pair.

The water temperature in the tank needs to be between 72° and 82° Fahrenheit. If your water is very hard or alkaline, you need to use RO or deionized water. Install the spawning tank with a sponge filter to keep the water clean and carry out partial water changes every day.

To make the fish feel at ease, paint the outside of the aquarium with a matte shade, especially if you don’t plan on using any substrate. You also need to use a lid to make the Angels feel more secure and at ease. If your fish are stressed and worried, they probably won’t spawn.

You might find that the fish are more relaxed if you introduce a dither fish. Dither fish are generally schooling fish such as danios, barbs, or tetras that inhabit the upper part of the water column. Many Angelfish breeders find that dither fish can prevent the male Angel from becoming aggressive toward the female.

When the fish are spawning, it becomes easier to tell the sexes apart. Both fish take turns in cleaning and preparing the nest site, and both sexes flirt and chase each other around the tank.

After a few days, the eggs hatch. The Angelfish larvae remain adhered to the eggs via a sticky thread, taking nutrition from the egg sac until they are large enough to become free-swimming fry. Throughout that time, both male and female Angelfish care for the fry.

However, if the fish become stressed, they will probably eat the eggs or fry, so most breeders remove the adults once the fry is independent. For the same reason, it’s a good idea to remove the dither fish at this time if you used any.

I hope you found our guide on how to tell the difference between male and female Angelfish useful. If you did, please remember to share!

Unfortunately, it’s incredibly difficult to tell the difference between the sexes when you buy juvenile Angelfish. Only once the fish reach six to seven months of age do the physical differences between the two become apparent.

Do you have Angelfish? Did our guide help you to tell if your fish are boys or girls? We’d love to know! Tell us in the comments box below!