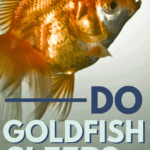 Aquarists don’t usually talk about whether their goldfish are getting enough rest, but this leads to an interesting question: Do goldfish sleep? After all, they don’t have eyelids. How do fish sleep without closing their eyes? I’ll answer these puzzling questions and more as I introduce you to mysteries of goldfish sleep cycles!

Let’s tackle the main question first: Yes, goldfish and other aquatic animals do sleep. They don’t do it in the same way as humans or other mammals and it may not always be obvious when they are asleep. After all, your goldfish doesn’t put on a pair of pajamas and lie down on a bed of Java Moss when you turn off the light!

Why Do Goldfish Need Sleep? 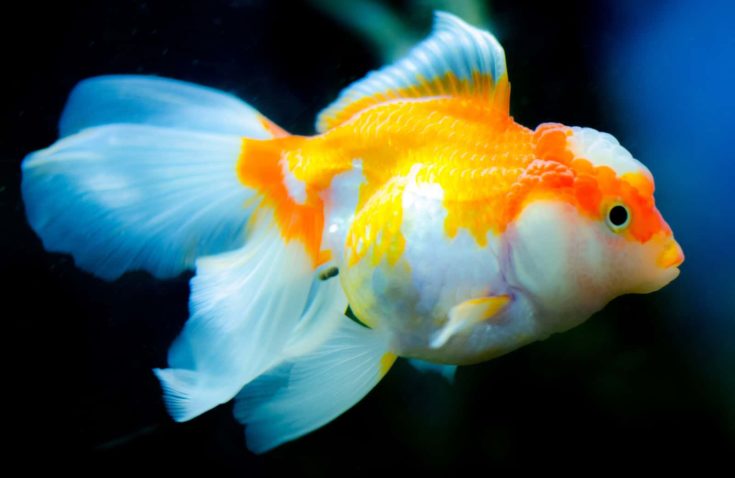 Just like humans and other animals, goldfish need regular periods of calm and quiet for their bodies and brains to rest. Sleeping restores their energy and helps keep their immune system working properly to prevent disease and illness.

When your goldfish don’t get enough sleep, their metabolisms can slow down and they lose their normally ravenous appetites. Their immune system starts to struggle, and your goldfish may develop bacterial or fungal infections. Ensuring your goldfish get plenty of rest is important to maintaining a healthy tank of fish!

How Do Goldfish Rest?

A “sleeping” goldfish isn’t truly asleep. Instead of going through stages of light and deep sleep cycles and losing consciousness like a mammal, goldfish rest while remaining peripherally aware of their surroundings. They take several short cat naps (with their eyes open) during a period of rest instead of sleeping for a long stretch!

A napping goldfish may:

If you scan a goldfish’s brain during these rest cycles, you’ll see they don’t go through the stages of sleep we’re accustomed to. Their brain waves don’t change when they are resting and they never enter the REM (rapid eye movement) stage where humans actively dream. As far as we can tell, goldfish do not dream when they sleep.

Do Goldfish Sleep Upside Down? 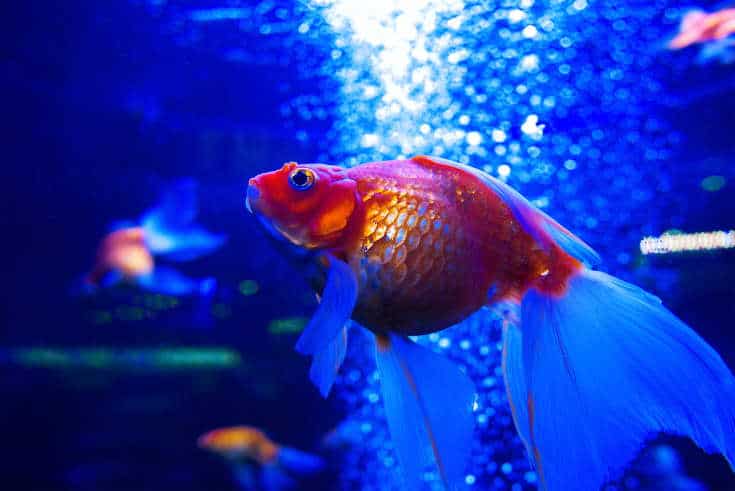 While goldfish may drift around as they nap, they remain mostly upright. While it isn’t unusual for them to sleep with their head lower than their tail, or even sleep at the bottom of the tank, it’s not normal for a goldfish to turn upside down or sideways when sleeping. Those are signs of a sick fish, not a sleepy fish.

When Do Goldfish Fall Asleep?

Do goldfish nap at night or during the day? A bit of both, actually. Goldfish are not specifically diurnal or active during the daytime, but they are much better adapted for daytime hunting and exploring than they are for nocturnal activities. So it’s natural for your pet to sleep more when the lights are off than when they’re on.

Goldfish see nearly the same spectrums of light as humans but can also see infrared and ultraviolet waves. This means they can see best at dawn and dusk, when the light coming into the water is highly polarized. But they don’t really see better in darkness than we do. So wild fish are usually more active during the day than night.

How Long Do They Sleep? 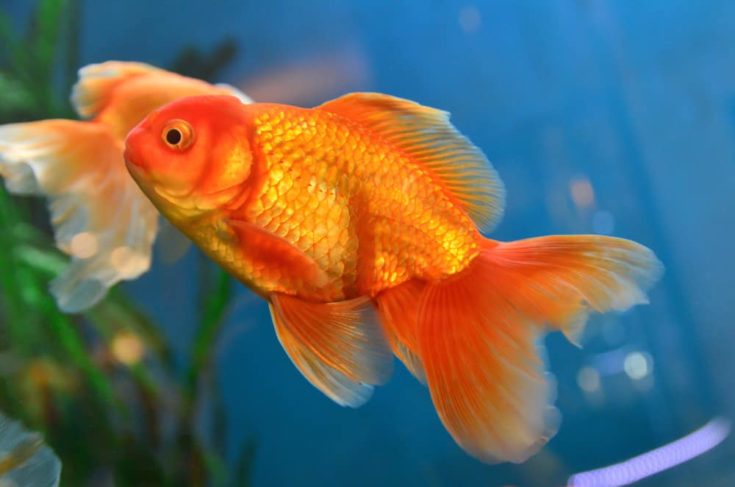 Since goldfish don’t sleep the way we do and instead rest during periods of low-activity, it’s hard to gauge exactly how much time they spend asleep or awake. From my observations, I’d estimate that the average goldfish sleeps about 8 to 12 hours a day in short cycles of 10 to 30 minutes, with variation between fish and tanks.

You can alter your fish’s sleep cycles, too. If your aquarium lights are on a regular 12-hour on/off cycle, they will learn to sleep when they’re off and be more active when you’re awake (and feeding them)! A brightly lit or very noisy room will likely prevent them from sleeping, too, even if their light is off at night.

Differences Between Sleeping and Sick Goldfish

You should easily be able to tell the difference between a sick goldfish and a sleeping fish once you become familiar with the members of your community. Your goldfish will develop their own unique personalities and habits, and you’ll see changes when they’re getting sick that stand out from their normal behavior. 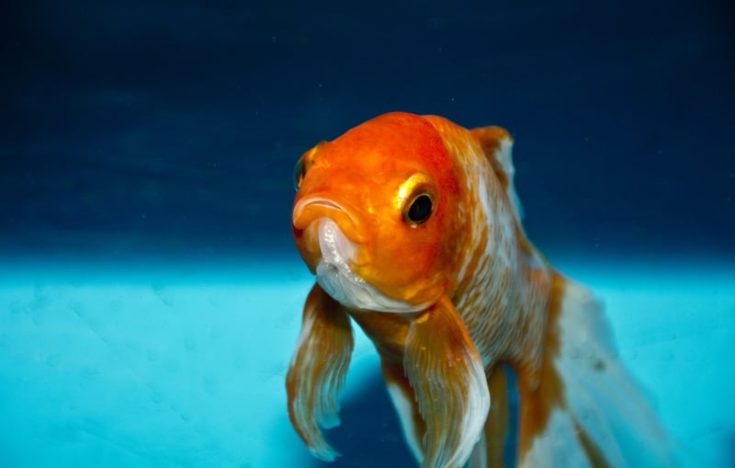 Healthy goldfish respond if you approach their tank, even if they are napping, and swim in their normal fashion when awake. They also actively search for food, eat with great appetite, and usually exhibit their most vivid colors while doing so. On the other hand, stressed or sick goldfish show alternative appearances and behaviors. Click here to know more about your goldfish.

Reasons Your Goldfish May Sleep More Than Usual

Occasionally, you may notice your goldfish seem to be sleeping more than usual, or showing other changes in behavior like constant yawning or suddenly acting aggressively with their tank mates. While more sleep might indicate a good mattress in humans, these may be signs of stress and can lead to illness if not corrected in time. Some common reasons for goldfish lethargy include: 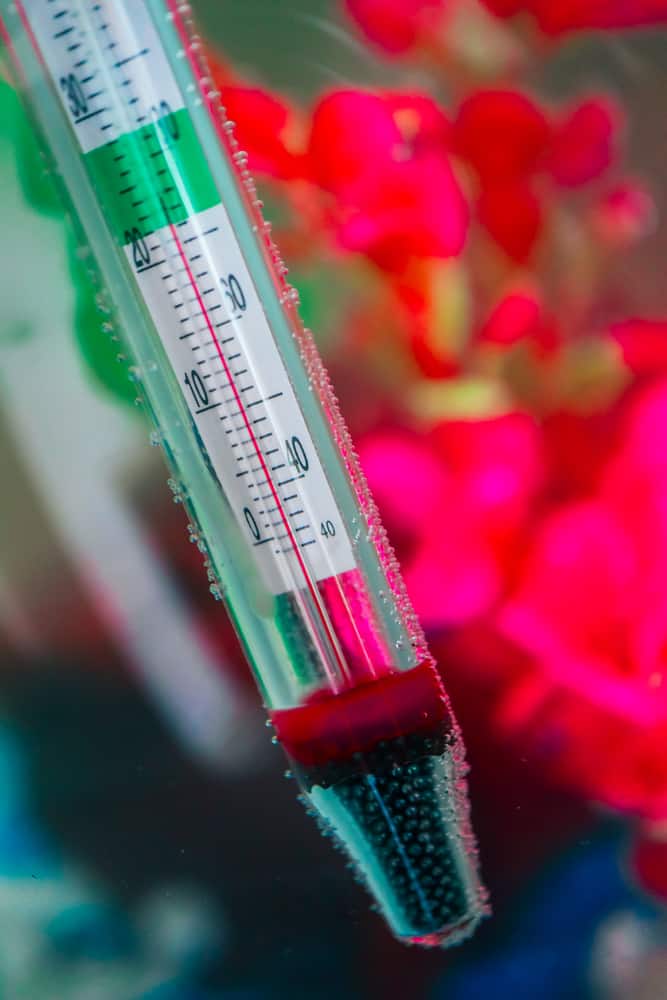 Depending on the breed(s) of goldfish you have, their ideal water temperature may be very broad or quite narrow. Fancy goldfish are usually more sensitive to their specific water temperature but no goldfish likes it when the temperature changes rapidly. Even a shift of 5 degrees in a few hours could cause stress.

If you’re keeping your goldfish in water too warm or cold for them, it’s likely to make them lethargic and kill their appetites, which eventually leads to illness. The constant sleeping lowers their metabolism and immune system and makes it likely they’ll pick up an opportunistic infection.

Another thing that stresses a goldfish out is not having enough room to swim. An undersized tank or one packed with other fish, plants, or decor can lead to accidental injuries and negative behaviors like nipping and fighting over food. They usually become lethargic and eventually sick in cramped tanks. 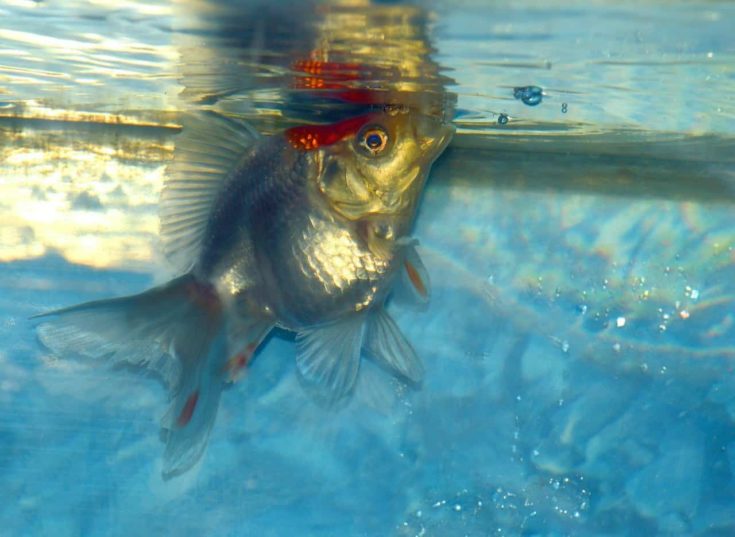 It’s normal to see your goldfish yawning since that’s how they clean their gills. But they shouldn’t be yawning constantly or gasping for breath at the surface of the tank. These are signs of low-oxygen levels and could signal a toxic spike of ammonia in your tank.

Goldfish are well known for their voracious appetites, and one side effect of their never-ending quest for food is that they produce a lot of biowastes. If you skip a few water changes the ammonia levels in your goldfish tank can quickly hit lethal levels. Sleepy or yawning goldfish can be a sign of high ammonia in your tank.

While goldfish can’t close their eyes, they do sleep at night and take naps during the day. It’s normal for them to sleep around 8 to 12 hours out of 24 in short bursts, and most fish learn to sleep when you’re not interacting with them. Your goldfish need plenty of rest to remain healthy and may get sick if sleep-deprived.

Excessive lethargy and constant yawning are not normal in goldfish and usually signal problems with your tank’s temperature, environment, or water quality. I’d love to hear about your goldfish’s sleeping habits or answer further questions about the science of sleeping fish, so please comment below or send a note via social media!

1 thought on “Do Goldfish Sleep? How To Tell And For How Long”