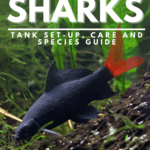 While it’s fun to fill a freshwater aquarium with schooling fish, there’s something to be said for keeping a unique solo bottom dweller like a Red Tail Shark in your tank, too. These semi-aggressive algae eaters can be territorial, but their vibrant markings and active nature makes them a good fit for many communities!

Mature fish are very active swimmers and explorers; young fish often shy and hide in caves/vegetation during the day

Semi-aggressive and territorial towards other bottom dwellers

Ideal for keeping with upper and mid-level fish like Bala Sharks, Pictus Cats, semi-aggressive and peaceful barbs, Gourami, Angelfish, or with groups of schooling tetras, rasboras or minnows. Avoid keeping with bottom feeders like plecos, loaches, rainbow sharks or other red tailed sharks

If you’re looking for a unique type of fish that will really stand out in the lower parts of your aquarium, consider adding a freshwater shark to your community. One of the most popular and vibrant species is the semi-aggressive Red Tail or Red-Tailed Black Shark (Epalzeorhynchos bicolor).

These sharks aren’t the easiest species to accommodate in a mixed community, but with a moderate amount of planning even an amateur fish keeper can pull it off. Let’s talk about the requirements for keeping a Red Tail in your tank, starting with some background on the species!

Red Tails are native to Thailand and were introduced to the aquatic trade in the early part of the 20th Century. Originally endemic to rivers and streams throughout the region, this species has become nearly extinct in the wild from over-harvesting and habitat loss, and is currently considered critically endangered:

Also known as the Red Tail Sharkminnow, these vibrant fish are members of the carp or Cyprinidae family and are related to minnows, goldfish, and koi. In the wild, Red Tails live along the bottom of swift-moving streams and rivers, where they feed on algae, plant materials, insects, and small crustaceans.

Red Tail Sharks are named for their vibrant red caudal fins. While their bodies are a deep, rich black, that ends in a line right at the caudal peduncle where the red tail starts. Unlike the similar and more friendly Rainbow Shark, Red Tails only exhibit red from the peduncle to the tip of the tail and never on their other fins.

Red tails average between 5 and 6 inches from snout-to-tail when mature. Juveniles are sold at around 3 inches in length and reach their adult size in about a year. Red tails typically live for 4 to 6 years in captivity with proper care.

Red tails have a reputation for being hard to deal with, but they’re actually not that challenging once you understand their needs. While young fish may be shy at first and spend their time hiding in rock caves and vegetation, mature Red Tails are active, semi-aggressive and territorial bottom dwellers.

While Red Tails prefer to dominate the lower parts of your aquarium, they usually leave the middle and upper levels alone. They’ll still chase other fish away from their territory if they happen to swim through, but they won’t attack or hunt your mid-level or surface schoolers:

How to Care for Your Red Tail Shark

What’s the best set-up for a Red Tail tank, and what kind of care do they need to thrive? While they are moderately difficult to accommodate initially, they’re not hard to maintain once you’ve established your aquarium!

If you want to keep a Red Tail with the least amount of stress, start with an ideal shark set-up and build your community around their needs. Three key features to a great Red Tail tank are: high-quality filtration with a moderate water current and lots of room at the bottom to swim and explore!

While you may be able to temporarily keep a young fish in a smaller set-up, an adult Red Tail needs at least a 55-gallon aquarium to explore, and 75-gallons is even better since they only use the lower part. I don’t recommend keeping multiple Red Tails in the same aquarium unless you’re an experienced shark keeper.

These sharks are not terribly fussy about their substrate, so you can use any type of aquatic soil, sand or gravel you prefer. To recreate their natural habitat, go with a mix of naturally colored gravel and smooth, round pebbles. You can even use a neon-colored kid-friendly product if you’d like!

Red tail sharks prefer warm water from 72 to 79°F, so use a heater to keep your tank’s temperature stable. They’re not sensitive to mineralization and tolerate from 5 to 15 degrees of hardness (dH), and prefer slightly alkaline water with a pH 6.8 to 7.5.

Red Tails prefer set-ups that mimic their natural swift-river habitats, so you’ll need a good filtration system to provide a moderate current along the lower parts of your tank. As bottom dwellers, sharks are sensitive to toxins like ammonia and need very clean, well-oxygenated water:

I’d definitely get some lights for a shark tank. Red Tails are active during the day, so LED aquarium lights are an inexpensive way to highlight your shark community and will meet the needs of most aquatic plants, too.

Sharks need plenty of open areas for swimming, but they also like to hide and nibble on vegetation. They love to sleep in crevices of rocks and explore interesting sticks and branches. You can use live plants, piles of rocks and driftwood to break up the bottom of your tank and define the edges of your shark’s territory.

If you have a robust filtration system and change the water and the filter media on schedule, then you won’t really have to worry about the effort it’ll take to keep a healthy shark tank. Regular water changes should keep the waste products and toxins under control. Truthfully, your live plants will likely take more work to maintain than your fish.

Like their cousins, the goldfish, Red Tails are omnivores and eat both plants and live animals. They’ll also scavenge for algae and eat any food scraps on the bottom of the tank missed by your other fish. It’s best to feed your sharks once a day, although I like to fast mine one day a week as well.

What kind of food do Red Tail Sharks prefer? It’s easiest to use a commercial omnivore flake or sinking pellet diet as their primary food, and then supplement with a variety of treats to balance their nutrition:

While I don’t recommend that novices try keeping multiple Red Tails in the same set-up, that doesn’t mean you can’t have any tank mates in a shark tank! If you’re careful in your choice, it’s not hard to find mid-level species that work with these territorial bottom dwellers and have similar water preferences.

Some possible options (depending on your tank capacity and set-up) include:

Avoid keeping Red Tails with other bottom dwellers or territorial fish such as loaches, Corydoras species, most types of plecostomus and the majority of freshwater sharks. If your shark starts bullying your community, try breaking up their line of sight with decor.

Red Tails are egg-layers who spawn in rock crevices and driftwood caves in the wild, but it’s very difficult to breed them in captivity:

Sharks are healthy fish overall, but they’re susceptible to the usual water-borne pathogens, so you should always quarantine new fish and plants for a few weeks before adding them to your community.

Need some help designing the ultimate beginner’s shark tank? Here’s a detailed list of the equipment and supplies required for a basic planted aquarium to showcase your Red Tail and a small community of fish:

Have you ever had a Red Tailed Black Shark and did you enjoy our tips for keeping them? Leave a comment below or join the bigger community on social media. We don’t chum the water with novice fish keepers, either, so don’t let a lack of shark experience hold you back!