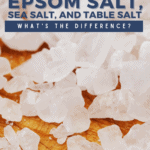 If you keep freshwater fish, the idea of adding salt to your tank will probably fill you with horror. However, many hobbyists swear by salt as a remedy for treating certain health problems in fish. There are several different salt types, including Epsom salt, aquarium salt, sea salt, and table salt, and it’s important that you know which kind to use. 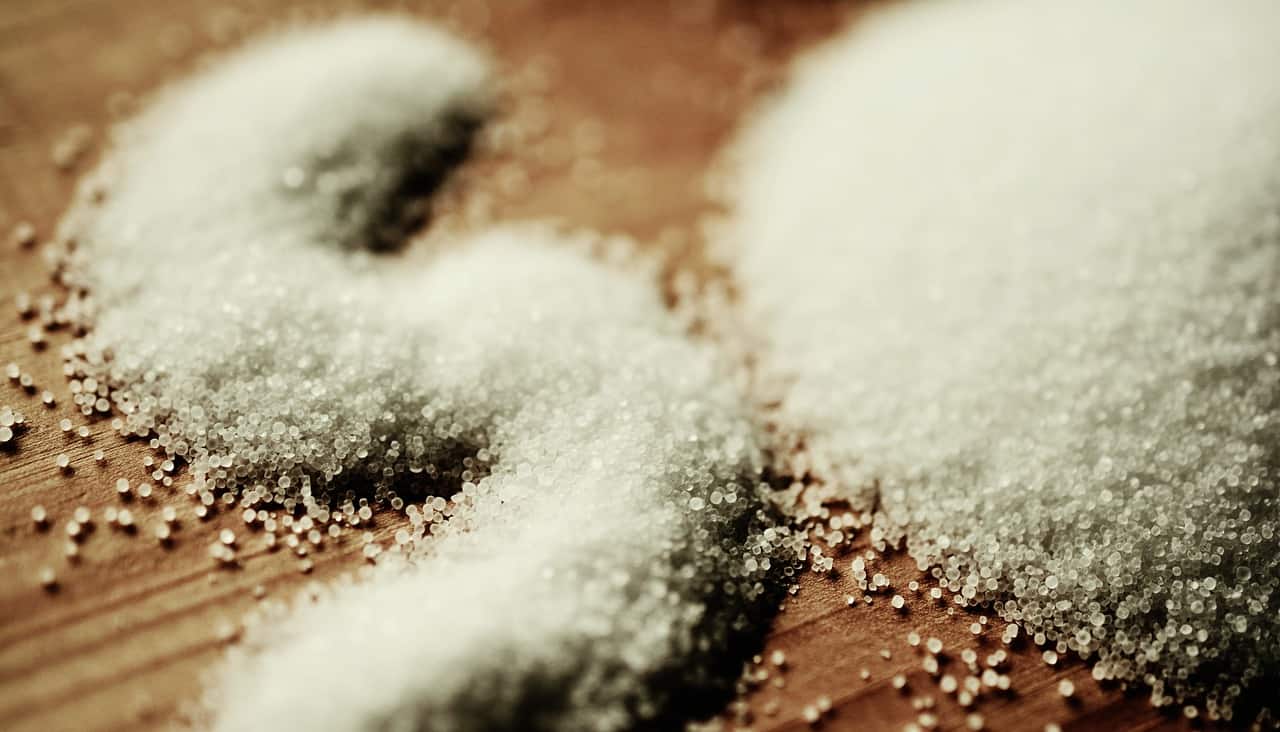 Common salt (NaCI) is the condiment that you find in most people’s kitchen cupboards, commonly labeled as table salt. But there’s more to salt than just something that you use in cooking.

Salt is essentially the general term used to describe any substance produced through a neutralized reaction. That’s when an acid reacts with some form of base material. All salts share the same fundamental characteristics:

Naturally-occurring salts and those that are artificially created are extremely important. Did you know that salt has over 14,000 uses? As well as an essential seasoning in cooking, salt is used to make thousands of items that we use every day, including clothing, trainers, and even the computer that you’re using to browse our site!

How Does Salt Work In Your Aquarium?

Salt has many uses in the aquarium. 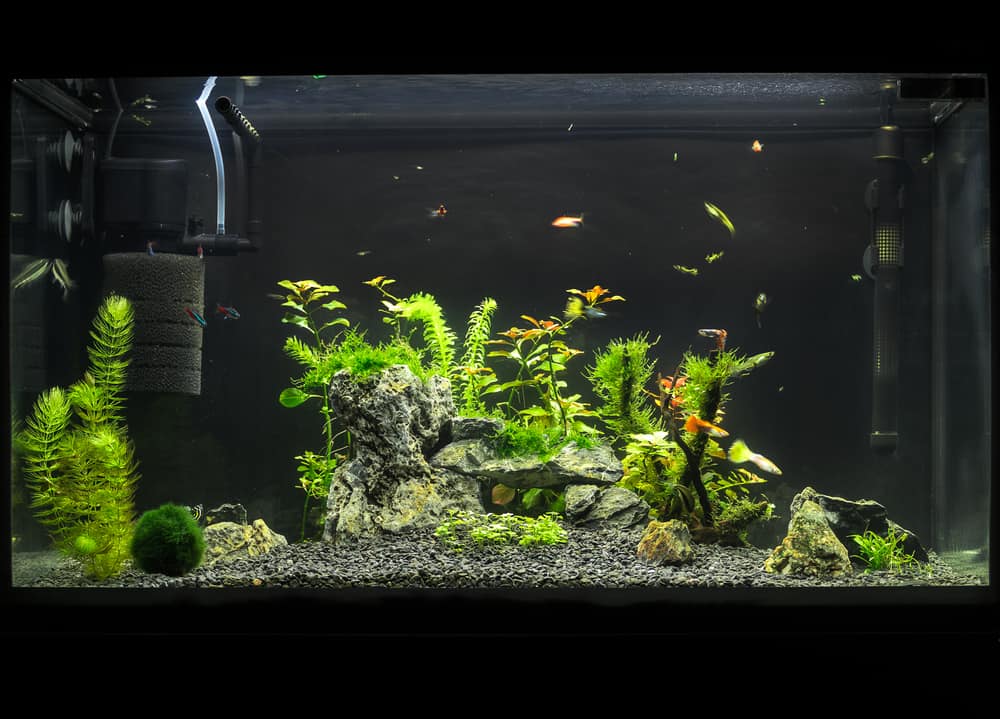 For example, aquarium salt is a handy remedy for treating and preventing several common fish diseases. Also, salt can help heal injuries, improve gill function, promote the formation of a healthy slime coat, kill certain parasites, and even reduce the uptake of harmful nitrates. You can also use salt to alter the water hardness and pH of your tank.

However, there are several types of salt, and they have different applications in the aquarium.

Aquarium salt is basically pure, untreated sodium chloride. This form of salt is extremely versatile, has antibacterial properties, and is used extensively in the hobby where it has become an essential item in the aquarist’s armory.

In tropical freshwater fish, aquarium salt can be used:

Unlike many over-the-counter fish medications, aquarium salt is very cheap and widely available, as well as being incredibly versatile.

When To Use Aquarium Salt 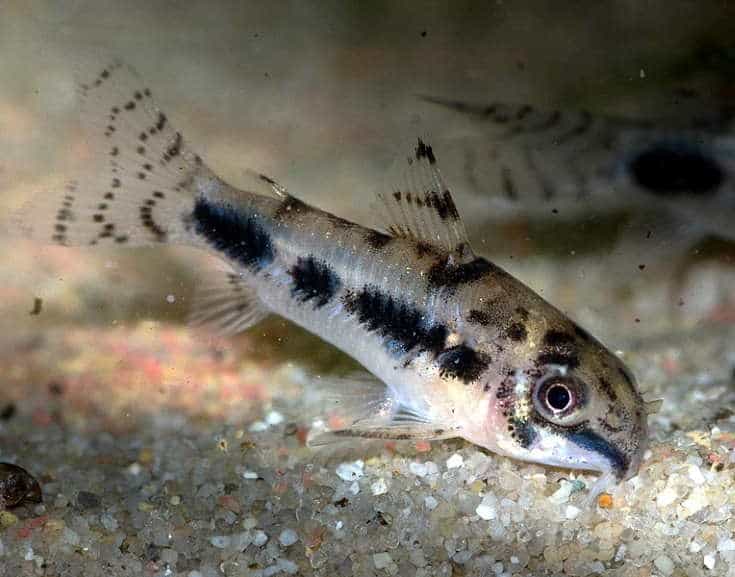 Aquarium salt can be used to create a salt dip or a bath.

When using aquarium salt to treat parasites, use a dip. A dip entails putting the affected fish in a salt and dechlorinated tap water solution for up to 30 minutes before returning the fish to your main tank.

To make a saltwater dip, make up a solution of one tablespoon of aquarium salt per gallon of water. Place the fish into the salt dip for five to eight minutes, no longer. Acclimate the fish for two to three minutes before replacing it in your main tank.

A bath means that you are treating the whole tank. Salt baths are generally used for treating nitrite poisoning, stress, and some parasites and use a lower concentration of salt than a dip. If necessary, a bath treatment can be maintained for up to three weeks.

However, rather than using a salt bath, I recommend that you use stress coat products, which can be just as effective and are safe to use in a planted tank. 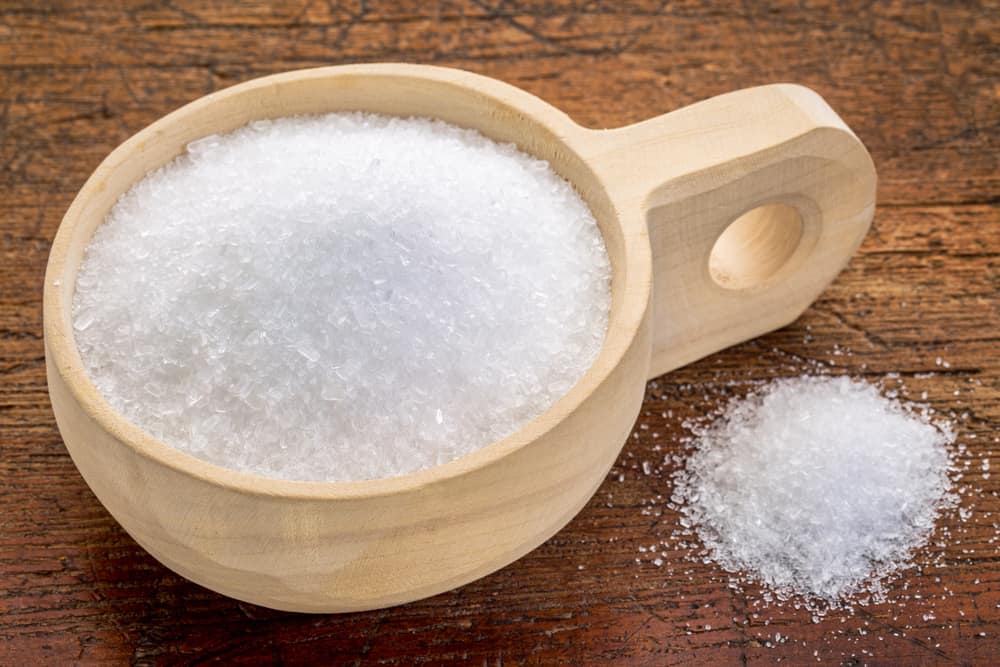 Epsom salt is actually not a salt at all, but a chemical compound called magnesium sulfate that contains magnesium, oxygen, and sulfur. The substance is named for the town of Epsom, England, where it was discovered.

Epsom salt is used to treat human ailments, such as constipation, fibromyalgia, and insomnia. The substance is also useful for treating fish suffering from Dropsy, swim bladder disease, and constipation.

As previously mentioned, aquarium salt is not used to treat these conditions.

When To Use Epsom Salt

You can use Epsom salt to increase the water hardness in freshwater fish tanks. That’s because hard water contains more dissolved calcium and magnesium than soft water. Some fish prefer soft water, whereas others require hard water.

Also, the degree of water hardness can have an impact on pH levels. Hard water is alkaline, whereas soft water is more acidic. So, you can use Epsom salts to change the water chemistry in your tank. 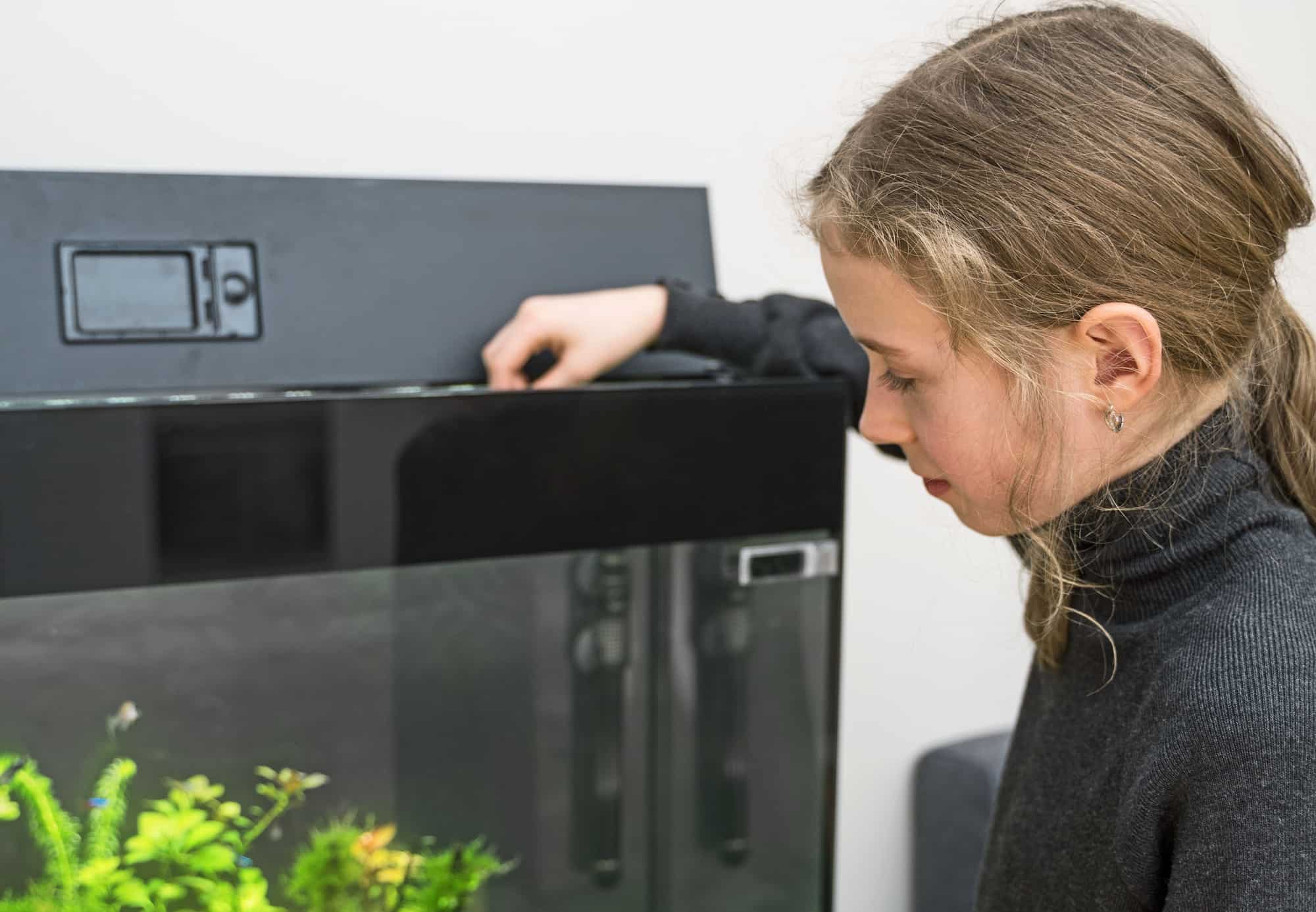 However, monitor the changes carefully, as abrupt shifts in pH levels can be very stressful for fish and may even kill them. Basically, you should avoid pH changes greater than 0.3 in any 24 hours.

Many types of fish suffer from constipation including bettas and goldfish. Constipation causes loss of appetite and a bloated belly and is generally caused by overfeeding or feeding a diet that’s too low in fiber.

You can treat constipation in fish by giving an Epsom salt dip. Epsom salt acts as a muscle relaxant, and immersing the fish in a solution of one tablespoon of Epsom salt to one gallon of water for around 15 minutes or so often does the trick.

Dropsy is a serious condition that affects the fish’s kidneys. If the kidneys fail, the fish will retain fluid in its abdomen, leading to a bloated belly and raised “pineapple” scales.

Epsom salt can be used as a complementary element of dropsy treatment by adding 1/8 teaspoons for every five gallons of water as a bath that treats the whole tank. Together with antibiotics, the Epsom salt may relieve the swelling.

Do not use aquarium salt or any other kind of salt to treat Dropsy, as it may make the fish’s condition worse.

Many species of fish can suffer from swim bladder disease, and fancy goldfish are especially susceptible. Fish affected by swim bladder disease struggle to remain upright, as the swim bladder is compromised. The condition can be caused by infection, impacted eggs, constipation, and gulping air from the water surface.

Increase the water temperature slightly to between 78o and 80o Fahrenheit and add 1/8 teaspoon of Epsom salt per five gallons of water in your tank. 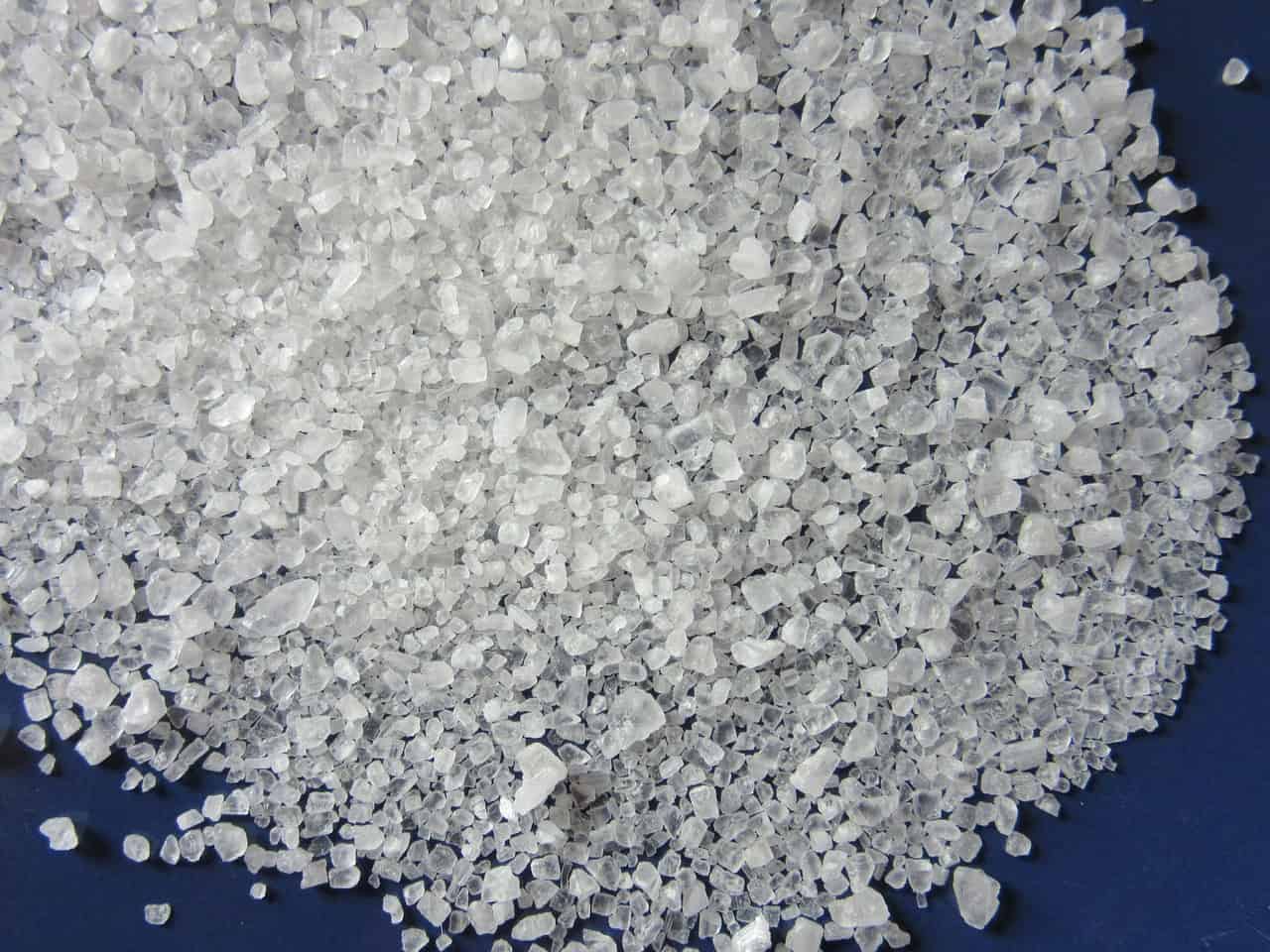 Sea salt is also known as marine salt and should never be confused with aquarium salt. Sea salt contains chemical buffers that will kill freshwater fish, and it must only be used to create saline water for marine tanks.

When To Use Sea Salt

Marine fish, corals, sponges, and the like live in an ocean environment where the water has a very high salt content. To create salinity in the tank and establish the correct water hardness and pH, aquarists use a sea salt mix combined with tap water and a water conditioner.

Sea salt is not suitable for use as a medication in freshwater tanks.

Common table salt is basic sodium chloride and is used around the house to cook, season food, clean, preserve, and a whole host of other random things.

However, there’s a big difference between table salt and aquarium salt. Table salt is often treated with chemicals, such as iodine, and anti-caking agents, some of which contain low toxin levels, including cyanide.

When To Avoid Salt 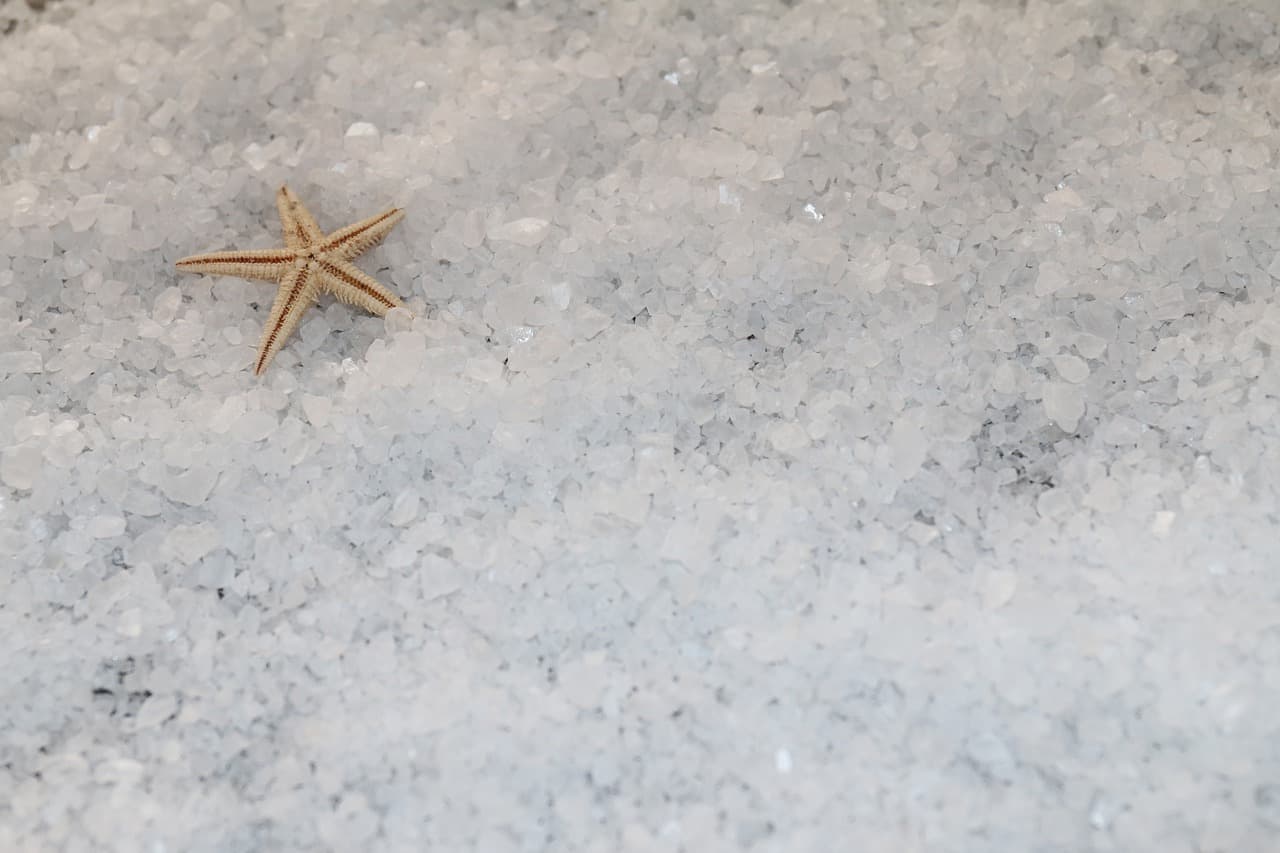 Although salt can be extremely beneficial in the fish tank when used correctly, there are some occasions when its use should be avoided.

Live plants don’t tolerate salt very well, and even relatively low salt levels can kill your plants. If you have a sick fish and you want to use salt to treat it, move the fish to a quarantine tank, rather than dosing your main tank and risking killing your plants.

Certain scaleless fish species lack the barrier provided by scales, and they don’t tolerate salt very well. Avoid using salt if you have Corydoras catfish, tetras, or other scaleless species in your tank, as these species are intolerant of salt.

Salt can be used for many different purposes in the aquarium, depending on the type of salt you’re using. 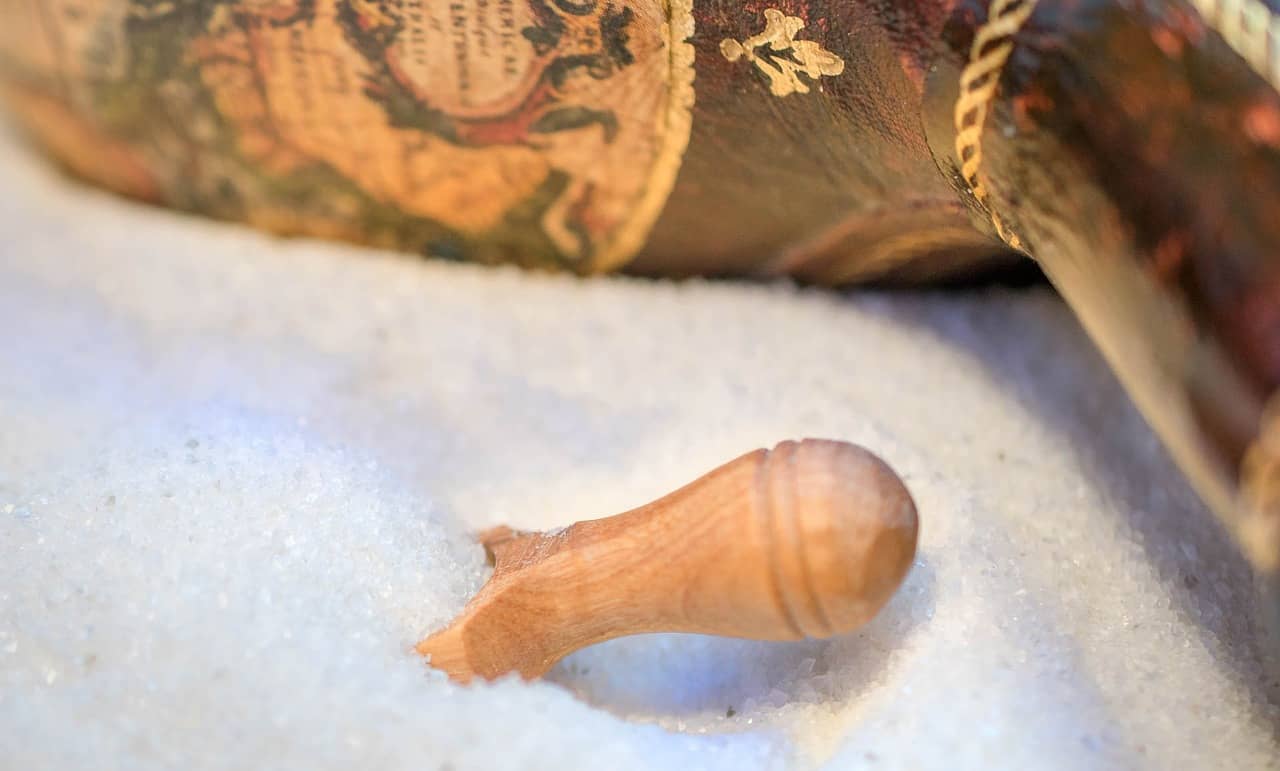 As a general rule, aquarium salt is the safest and most versatile choice for treating injuries and certain infections and parasites. Sea salt should only be used to create saltwater for a marine setup, and Epsom salt is useful for treating a few digestive conditions. Table salt contains additives that could harm your fish, so we don’t recommend its use in your aquarium.

We hope you enjoyed this guide. If you did, please share it with your friends, and do feel free to tell us what you think about using salt in your tank in the comments box below.