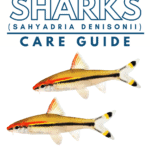 The Roseline Shark or Denison barb makes a beautiful addition to a large community setup. These fish are colorful, active, and sociable, and they make a gorgeous display when kept in a group.

In the wild, Roseline Sharks are regarded as endangered on the IUCN Red List, thanks to the fish’s decreasing numbers, and they’re not the easiest fish to keep in the home aquarium.

That said, if you’re up for a challenge, read this detailed guide to find out everything you need to know about caring for the Roseline Shark.

Weston Ghats, India, specifically the Achankovil River, Cheenkannipuzha (a major tributary of Valapattanam River), near Mundakayam town, and in the Chaliyar River

All areas but predominantly midwater

Peaceful. Gets along with most other non-aggressive freshwater fish species

The Roseline Shark was first described in 1865 and is found in only four locations in Weston Ghats, India, specifically the Achankovil River, Cheenkannipuzha (a major tributary of Valapattanam River), near Mundakayam town, and in the Chaliyar River.

Unfortunately, the species’ popularity in the hobby led to overfishing, and that, together with local deforestation, decimated the wild population of Denison barbs. For that reason, the fish are now considered endangered, and their populations are regarded as “decreasing” on the IUCN Red List.

Fortunately, there are now commercial fish breeding programs in Eastern Europe and Southeast Asia, and wild-collection of the Roseline Shark is greatly restricted.

Roseline Sharks live in large shoals, inhabiting streams, rivers, and pools where the water is clear and highly-oxygenated.

The environment in these areas is rocky and densely vegetated with a relatively high flow rate.

Denison barbs are long, torpedo-shaped fish. The body is silvery with a black line that extends for the whole length of the fish from snout to tail. In contrast, there’s a bright scarlet line that runs along the top of the fish’s black line, from its snout, through the eye, and along the body to the midpoint.

The dorsal fin is edged with brilliant red, and the caudal fin has bright yellow and black stripes. When mature, some specimens develop a green tinge on the head. You can also buy an artificially created gold variant that has the red line but not the black stripe.

A full-grown Roseline Shark measures around 6 inches in length.

Roseline Sharks live for up to five years in captivity, as long as you provide a high-quality diet and pristine water conditions.

Although the Roseline Shark is a peaceful fish, they are extremely active, darting around the tank in a beautiful, sparkling school.

However, it should be noted that there have been reports of aggression in specimens that are kept in very small aquariums, so you must provide plenty of space for them.

Roseline barbs do not do well when kept in isolation or in pairs, as they rely on social interaction to remain stress-free and healthy.

For that reason, I recommend that you keep a school of at least six Denison barbs.

In addition to their own kind, there are quite a few other fish species that generally do well with Roseline barbs. Basically, you want fish that are agile and fast swimmers, and which don’t have trailing, delicate fins.

A few ideas for tank mates include:

It’s recommended that you don’t keep slow-swimming fish, which could be injured or stressed by the speedy Denison barbs.

To keep your Sharks in tip-top condition, always feed them the highest quality food that you can get. Cheap brands of fish food generally contain lots of padding, which has no nutritional value and can cause long-term digestive health problems.

What to Feed Your Roseline Shark

Roseline Sharks are omnivorous, so they need a diet of both meaty protein and vegetable matter.

In nature, these fish consume insects, small invertebrates, some plant matter, and algae. You can feed your Denison barbs tropical fish flakes and pellets as a basic diet, choosing a high-quality food containing carotenoids to boost the fish’ color.

Add variety to the diet and add live and frozen foods, especially daphnia, bloodworms, brine shrimp, and spirulina. These fish also appreciate a few blanched vegetables as a treat.

How Much and How Often to Feed

Feed your fish twice a day, only offering what they will consume in a couple of minutes.

Roseline Sharks grow to around 6 inches in length as adults, and they are powerful, active swimmers that need plenty of space.

The minimum aquarium size that I recommend is 55 gallons for a small school of fish, larger if you want to create a mixed-species community setup.

The tank should ideally be rectangular to maximize swimming space, and you’ll need a cover slide or tight-fitting lid, as these fish can jump!

Choose fine gravel or coarse sand as a substrate in your Roseline Sharks’ tank.

It’s important to replicate the Denison barb’s natural habitat when choosing decorations for the interior of the tank. That helps to relax the fish, prevents stress, and encourages the barbs to develop their vibrant colors.

Add rocks, smooth stones, and pebbles for a natural look, but remember that these fish do need lots of space to swim, so don’t clutter the tank too much. That said, the Sharks do appreciate a few hiding places, so you can include caves, overhangs, and a few twisted roots.

Dense planting is very important, but you must be sure to anchor your plants securely so that they don’t get uprooted by the fish, dashing through and around the stems.

Roseline Sharks need a fast flow and extremely well-oxygenated water. The tank’s water should be pristine, so we recommend that you use an external canister filter and a powerhead.

Roseline Sharks are tropical fish that require a water temperature of between 60° and 77° F.

Roseline Sharks are happy with normal lighting conditions, so choose an LED lighting rig that best suits whatever plant species you decide to go with.

You’ll need to carry out a 30% to 35% water change every week, as well as vacuuming the substrate, tank corners, underneath decorations, and around the base of plant stems. That’s crucial, as you want to remove uneaten fish food, plant debris, and fish waste, which would otherwise pollute the water.

Remember to rinse your filter media and change it when required, as per the manufacturer’s guidelines.

Setting Up the Aquarium

When setting up your fish tank, start by assembling what you need, including:

How to Set up Your Aquarium

Roseline Sharks are generally healthy and hardy, but you must give them pristine, crystal clear water. If the water is dirty or unsanitary, the fish will become stressed, leaving them prone to common fish diseases.

Denison barbs are extremely active, lively, shoaling fish that love to swim in the tank’s open areas. They are curious fish that like to explore their environment.

There are some red flags to be aware of, including:

Ich or White Spot disease is caused by a ciliate protozoan parasite called Ichthyophthirius multifiliis.Affected fish flick or rub against objects in the tank. A rash of white spots spreads over the fish’s gills, fins, and body after a day or two.

Set the tank temperature to 82o F for three days, and treat the water with a White Spot treatment.

Flukes are parasitic creatures that fasten themselves to the fish’s gills or body. Affected fish rub against the substrate and ornaments and secrete excessive mucus.

Treat the aquarium with an anti-parasitic drug.

Quarantine any affected fish, and treat the water with antifungal treatment.

Treat the tank with antibacterial medication.

Ich is a very common disease that’s caused by an aquatic protozoan parasite.
Fish infected with Ich develop a sprinkling of tiny white spots on their fins, gill covers, and bodies. They also flash against the gravel and other solid objects in the aquarium.

Raise the water temperature to 82o F for three days. Use an OTC  White Spot Disease medication to treat the tank.

Flukes are parasitic creatures that fasten themselves to the fish’s gills or body. Affected fish rub against the substrate and ornaments and secrete excessive mucus

Quarantine any affected fish, and treat the water with antifungal treatment.

Quarantine infected fish, and treat with an antifungal medication.

Treat the tank with antibacterial medication.

Roseline Sharks cannot be bred successfully in the home aquarium. The specimens you buy in fish stores or online are generally raised by commercial breeders who use hormones to encourage spawning.

I don’t recommend that you attempt to breed the fish in your tank, as that can cause them stress and is most likely to fail anyway.

You can sometimes buy Roseline Sharks in fish stores, but you’re most likely to find them for sale via online dealers and fish shops starting at around $20 per fish.

I hope you enjoyed our guide to caring for the Roseline Shark.

Do you have Roseline Sharks in your setup? Tell us about them in the comments box below!

And don’t forget to share our guide if you enjoyed it!