Skip to content
Tankarium is reader-supported. When you buy via the links on our site, we may earn an affiliate commission at no cost to you. Learn more. 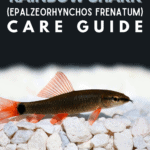 If you’re looking for an active, colorful fish to add to your tank, the ever-popular freshwater Rainbow Shark (Epalzeorhynchos frenatum) might fit the bill. Unfortunately, Rainbow Sharks are often not kept in large enough aquariums and with the right tank mates. So, what do these beautiful fish need to be happy and thrive?

Read our care guide to find out everything you need to know about caring for the Rainbow Shark.

Moderate. Gets along with many other freshwater fish species

The Rainbow Shark (Epalzeorhynchos frenatum) is found in the Mekong, Chao Phraya, Maeklong, and Bangfai basins in Indochina.

The Rainbow Shark appears on the IUCN Red List as being of least concern, although its numbers in the wild are decreasing largely due to habitat destruction.

In nature, the Rainbow Shark lives in bodies of water where the substrate is sandy, frequenting the river bottom where the fish feeds on plankton and algae. The fish migrate to flooded areas in the wet season, moving back to the rivers when the flooding dries up.

The fish are long and flat-bellied with a pointed snout and a trademark upright dorsal fin, which gives the fish a shark-like appearance. As juveniles, both sexes are pretty indistinguishable. Once the fish reach sexual maturity at around four inches long, the females are thick-bodied, whereas males are thinner with thin black lines on the tail fin and they are typically brighter colored.

There is also an albino variant of the Rainbow Shark. The Albino Rainbow Shark has the same brightly colored orangey-red fins as its cousin, but its body is white.

Rainbow Sharks live for between five and eight years in captivity when provided with a high-quality diet and well-maintained conditions.

These fishes are bottom-dwellers, but they are also active swimmers, busily scurrying around on the substrate, hunting for algae to eat. For that reason, it’s important that the tank you choose is rectangular to provide ample swimming space for your Rainbow Shark.

Although Rainbow Sharks are not known as jumpers, escape attempts are sometimes made when the fish are first introduced to a new tank. So, to be on the safe side, your aquarium should have a cover slide or a tightly fitting lid.

Rainbow Sharks are a territorial species, and that can result in a certain degree of belligerence and intolerance of other fish that invade the Shark’s space. Although juvenile specimens are generally timid, peaceable creatures that tend to hide away from others, they usually become more aggressive as the fish mature.

However, despite the Rainbow Shark’s antisocial reputation, you can include community fishes in your tank, provided that the species you pick like to hang out in the upper areas of the water column. Other bottom-dwellers should be avoided, as your Shark will almost certainly chase and intimidate the interloper, biting and generally bullying the unfortunate fish.

That behavior can be managed to some extent by providing plenty of caves, overhangs, and other suitable hiding places. It’s also essential for the peace and harmony in your aquarium that you don’t overstock the tank.

Peaceful species that are generally benign but still capable of defending themselves are a good choice as tank mates for Red Sharks. Good examples are barbs, danios, rainbowfish, and gouramis.

It’s also a very good idea to make your Rainbow Shark the last fish that you introduce to your tank. That will keep the fish from attempting to lay claim to the whole aquarium and should help to reduce territorial behavior.

Can You Keep Rainbow Sharks in Groups?

It’s generally not recommended that you keep Rainbow Sharks in groups. These fish are not a schooling species and they tend to be intolerant of their own kind, being solitary, territorial creatures in their natural environment.

There’s simply not enough room for more than one Rainbow Shark in a regular size aquarium, and larger specimens will chase and bully smaller, weaker ones, usually with a fatal outcome. If you really want to keep more than one Rainbow Shark, you should have a group of at least five, and your tank must allow at least one meter of territory per fish.

As well as avoiding other bottom-dwelling fish species that could be viewed by the Rainbow Shark as competitors for territory, I recommend that you don’t keep other freshwater sharks, catfish, and certain species of cichlids in the same tank as a Rainbow Shark.

As with any fish species, one essential part of your aquarium husbandry is providing your fish with a high-quality, nutritionally balanced diet in the correct quantity.

What to Feed Your Rainbow Shark

Rainbow Sharks are omnivores, requiring a diet that includes both meaty protein and plant matter.

Captive Rainbow Sharks will happily eat most foods that reach the bottom of the aquarium. That includes tropical flakes, pellets, frozen foods, live food, veggies, and algae. To ensure that the fish’s colors remain vibrant and bright and that juveniles grow properly, you need to offer your fish a good variety of live and frozen meaty foods, such as bloodworms, brine shrimp, and daphnia.

How Much and How Often to Feed

As with most fish species, it’s better to feed your Rainbow Shark small amounts of food two or three times a day.

Offer the fish just what it will consume in a few minutes. Be careful that you don’t overfeed, as uneaten food will decay in the tank, leading to problems with water quality and increasing the bioload on your biological filter.

As mentioned above, Rainbow Sharks are active fish that need plenty of space in which to swim, and they are also territorial. For that reason, you need a tank of at least 50 gallons, and a rectangular aquarium is the best choice.

Although I don’t recommend that you keep more than one Rainbow Shark, if you intend to keep a group of these fishes, you will need a 125-gallon aquarium that’s at least six feet in length.

As previously mentioned, be sure to choose a tank with a cover slide or tightly fitting lid so that your fish can’t jump out.

Sand is the most suitable substrate for Rainbow Sharks and replicates the river bottom of their natural habitat. That said, you can use gravel if you prefer, but choose a fine gauge or very smooth variety that doesn’t have sharp pieces that could injure your fish.

As Rainbow Sharks are very territorial, it’s important to provide them with plenty of caves, driftwood, twisted roots, and rocky overhangs that the fish can claim as theirs.

Rainbow Sharks live in rivers where the current is quite fast, and the water is well-oxygenated. So, a fast flow in your tank will replicate that environment perfectly, as well as helping to boost the performance of your filtration system.

An external canister filter or box filter augmented by a powerhead might be the best arrangement for maximum flow and super-efficient filtration and oxygenation.

When choosing a filter, keep in mind that you need a suitable GPH-rated unit. GPH stands for Gallons Per Hour and tells you how many times the total volume of water in your tank is circulated through the unit over a one-hour period.

The minimum recommended GPH is four times the volume of your aquarium. So, if you have a 100-gallon tank, the minimum GPH you want is 400. Note that the GPH rating is often based on empty tanks or those with low stock. So, it’s best to choose a slightly higher GPH to get the most efficient filtration for your tank.

Tropical fish need specific water parameters if they are to stay healthy and thrive. So, make sure that you set your aquarium up according to the needs of your fishes and monitor the water conditions regularly.

Rainbow Sharks are tropical fish that need a water temperature of 75° to 81° F.

Rainbow Sharks don’t need any special kind of lighting. LED lighting units are generally cheaper to run, and programmable systems are available that allow you to set daytime or nighttime cycles to suit your fish and plants.

To keep the aquarium pristine and give your filtration system a helping hand, deep-clean the substrate each week with an aquarium vacuum to remove fish waste, uneaten food, and general detritus. Vacuum around the base of plants, under box filters and ornaments, and in the tank corners where waste tends to accumulate.

At the same time, perform a 30% water change. Periodically, rinse the filter media and sponges in some tank water to get rid of sludge, and replace your filter cartridges when necessary as per the manufacturer’s guidelines.

Setting Up the Aquarium

When setting up your aquarium, begin by gathering together everything you need, including:

How to Set up Your Aquarium

Rainbow Sharks are quite hardy fishes that enjoy good health, as long as they are offered a nutritious diet, the correct water parameters, and kept in a well-maintained aquarium.

Rainbow Sharks are typically active fishes that spend much time grazing on algae on the substrate.

You want to see your fishes busy and feisty, seeing off any tank mates that stray too far into the Shark’s territory.

There are some red flags to watch out for, including:

White Spot disease is probably the most common disease of aquarium fish and is also known as Ich.White Spot is caused by a ciliate protozoan parasite called Ichthyophthirius multifiliis.Symptoms include flicking against the substrate and tank ornaments. After a few days, a rash of tiny white spots appears all over the fish.

Flukes are parasites that attack fish’s body and gills. Fish with flukes rub against the substrate tank decorations, as well as secreting excessive mucus.

Increase the water temperature to 82o F for a few days, and treat the water with an Ich treatment.

Treat the aquarium with an anti-parasitic medication.

Quarantine all affected fish, and treat the water with antifungal treatment.

Quarantine the affected fish; treat the aquarium with antibacterial medication.

Rainbow Sharks reach sexual maturity once they are greater than four inches in length.

In nature, spawning typically happens seasonally in October through November. That said, the precise month of breeding does vary depending on the amount of daylight and the water temperature. Rainbow Sharks are egg-layers. The female fish lays her eggs, which are then fertilized by the male. The eggs usually hatch within a week.

Most of the Rainbow Sharks that you find for sale in fish stores and online are commercially bred on fish rearing farms in Southeast Asia. The species is virtually impossible to breed in the home aquarium, largely because of the fish’s aggressive, territorial nature within a confined setting.

Rainbow Sharks are usually readily available from good fish stores and via online dealers and fish shops for just a few dollars per fish.

I hope you enjoyed our article on caring for the feisty but beautiful Rainbow Shark.

Do you have a Rainbow Shark? What tank mates work best with your Shark? Tell us in the comments box below!

And, please remember to share our guide with your friends if you enjoyed it!