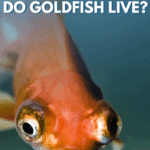 Setting up a goldfish habitat can be a big investment since these bright and active fish need plenty of space to grow to their maximum potential. Before dropping a lot of money on equipment and fish, it’s natural to investigate their life expectancy. How long do goldfish live, and how can you ensure your fish reach their Golden Years?

A Short Guide to Goldfish Lifespans

I’ve noticed that many people don’t expect their pet goldfish to be around for very long. Afterall, feeder goldfish are often sold for less than a dollar and given away in school events and at county fairs. Many kids have seen their hard-won prize fish pass away quickly in a fishbowl. So what’s the real-life expectancy of a goldfish?

Average Lifespan of a Goldfish

It’s actually not an easy question to answer, because it depends on a host of factors. There are hundreds of varieties of goldfish in the world, and your fish’s genetics and their early development will set natural limits on their possible lifespan. In general, however, goldfish are the longest-living pet fish and can live up to 40 years!

In a Pond or Large Aquarium

Since goldfish have been domesticated for thousands of years, we can’t really examine their life expectancy under natural conditions in the wild. We know that their close cousin, the common carp, can live for up to 38 years in protected outdoor ponds and streams, though wild fish probably don’t survive much past 5 to 10 years.

How long do goldfish live in a pond? Obviously, it depends on their conditions and diet. Assuming they receive high-quality care and are not eaten by a raccoon or other predator, pond goldfish can easily survive for 20 to 40 years depending on their type.

Aquarium-kept fish rarely live as long as their pond-raised siblings unless they are kept in very roomy tanks with excellent filtration and top-notched maintenance. My three Common goldfish were 12 years old when I had to sell them as I left town to start college. They had already outlived my golden retriever by 2 years, though!

I’ve never seen a bowl-raised goldfish that survived more than a couple of years, and I’d guess that the vast majority die within weeks. How long can goldfish live in a bowl? Even with diligent care, a goldfish in a bowl simply won’t live very long. Fishbowls are too small for goldfish, even the smaller fancy types.

When goldfish are cramped for space they get very stressed. This reduces their immune system and metabolism, which causes them to stop growing and predisposes them to illness. Stress hormones wreak havoc on their bodies, leading to disease and death. Even with the best care, these goldfish have a limited lifespan.

Quick trivia question! What’s the longest a goldfish has ever survived?

Lifespan of Different Types of Goldfish

There’s one further distinction we have to account for when talking about the life expectancy of a goldfish, and that’s what type of goldfish you have. The hearty single-tailed varieties like the Common (feeder) and Comet goldfish are the ones we typically see reaching the 20 to 40 range.

Fancy goldfish, on the other hand, is much frailer. Their squat bodies and special features like their double-tails, fancy fins, head growths, bubbles, and telescoping eyes are associated with health problems that reduce their longevity and lifespan.

The tougher varieties of fancy goldfish, like the Fantail, Oranda, and Ryukin, often make it past their 10th birthday and well into their teens, especially if they are raised in a pond. But it’s unlikely you’ll see this kind of longevity from fish with telescoping or bubble eyes. A delicate fancy goldfish has a lifespan of about 5 years, on average.

Increasing the Life Expectancy of Your Goldfish

You may have noticed that most varieties of goldfish have a fairly wide range when it comes to their life expectancy. Why is there so much variation in their lifespans? It comes down to their habitat conditions and care. The better you accommodate your goldfish and maintain their style of living, the longer you can expect them to survive!

Move Goldfish to a Pond

The ideal way to keep most types of goldfish is in a freshwater pond. Natural sunlight and seasonal variations go a long way to keeping goldfish healthy, lean and active. They will also naturally feed on insects, eggs and plant materials in your pond in addition to their usual diet.

While I wouldn’t recommend trying to keep the very delicate types of goldfish in ponds, other fancies can survive outdoors as long as they have extra protection. While Common and Comet goldfish are hearty and don’t require warm water, you can move Fantail, Oranda and Lionheads to a pond if you use a heater.

A pond-kept goldfish typically lives a few years longer than one in an aquarium (all other things being equal)! The key to shifting goldfish from a tank to a pond is to replicate their water conditions exactly before you move them:

Clean water is the secret to healthy, large and long-lived goldfish. Goldfish tanks require frequent maintenance and should be equipped with the best 3-stage filtration systems to keep the ammonia levels down. Spikes of toxic ammonia can poison your fish and lead to stress and ill-health. Regular water changes are a must for goldfish!

Following a strict cleaning and maintenance routine helps your fish live longer and healthier lives, but sometimes goldfish tanks crash without much warning. For large aquariums and pond environments, it might be wise to invest in an electronic tank or pond monitor that can alert you to sudden changes in your water quality.

Goldfish are omnivores and naturally eat a variety of plants and other animals. While it’s tempting to feed your fish a lot of food and extra treats, this usually leads to overweight, constipated fish. Fancy goldfish in particular are already predisposed to weight and digestive problems due to the odd shape of their bodies.

Being overweight can cause issues with their swim bladders as well. While this isn’t directly fatal, it reduces their ability to swim and feed. This can lead to a cascade of health problems and often dramatically shortens the life of a goldfish. You can find details on the best diets, treats and feeding regimens in our Goldfish Care Guide.

We’ve already covered the reasons you should never keep your goldfish in a bowl or small aquarium. Cramped goldfish are stressed goldfish. They may act aggressively with each, which often leads to injuries and infections. Medicating sick fish is also stressful, since the meds are toxic even if your fish tolerates the correct dose.

The ideal aquarium size varies depending on your number and type of goldfish, but for maximum growth and longevity I recommend allowing each fish a minimum of 50-gallons of capacity, and more is better if you have the space. 20 to 30 gallons is an acceptable range for a single fish but is less than ideal if you’re aiming for longevity.

Goldfish are the longest-living fish in the aquarium trade! While goldfish can live without water for up to 3 hours, the typical single-tailed can easily survive for 10 to 15 years in a large aquarium and up to 20 years in a pond under the right conditions. Even fancy goldfish often make it into their second decade of life with proper care!

Heck, a goldfish won as a prize might well surpass your dog or cat in terms of their lifespan! How long has your goldfish been around, or what’s the longest you’ve ever had a goldfish survive? Tell us about it in the comments, or join the conversation on our social media pages!

2 thoughts on “Goldfish Lifespan: How Long Do They Live In Tanks & Bowls?”