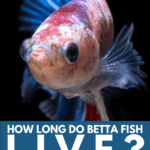 You’ve seen these fish at your local pet store – they’re colorful, feisty, and impossible to miss. Betta fish are one of the most popular starter fish in the hobby and it’s easy to see why. Unfortunately, their immense popularity means that there are many misconceptions about how long they live and how to care for them.

Bettas are relatively hardy fish that can live for a long time if cared for appropriately. Below, we answer the age-old question of how long betta fish live, and share some tips on how you could extend their lifespan just by making a few simple tweaks!

How Do You Care for a Betta Fish?

Though betta fish have a reputation for being hardy, the level of care they receive has a significant impact on their life expectancy.

Like most fish, bettas require pristine water conditions to maintain their health. They also do best when they are fed a healthy, nutritious diet. Good quality flakes will suffice, but live food sources such as daphnia and bloodworm will give your fish an added protein boost for optimal health.

How Long Do Bettas Live?

Bettas can live anywhere from between 2 years and 5 years, depending on how well they’re taken care of. In general, bettas in captivity live longer than those living in the wild. Wild bettas are exposed to all sorts of stressors that bettas in captivity are spared from – it’s why they are classified as vulnerable and endangered in their natural habitats.

However, the stressors faced by wild bettas can be present and even aggravated in bettas that are kept in poorly maintained environments. Water conditions can deteriorate rapidly in a captive environment, causing many bettas to die before they even hit the one-year mark.

Like all fish, bettas thrive when they are properly taken care of. Here’s how long you can expect your betta to live under ideal circumstances:

Bettas in captivity live for an average of 3 years, though they can live up to 5 years if cared for properly. Because bettas are generally sold as adults, it might be worth asking about the fish’s age when you purchase it so that you can accurately estimate its lifespan.

The better you care for your betta fish, the longer its expected lifespan. We will discuss ways of increasing your betta’s lifespan in the section below.

It is commonly assumed that bettas in the wild live for a maximum of 2 years because they encounter a greater variety of stressors compared to fish kept in well-regulated tanks. The fact that wild bettas are listed as an endangered species is a testament to the many challenges they face in their quest for survival.

Bettas in the wild live in shallow freshwaters in the tropics. However, these environments are easily polluted, which compromises the health of wild bettas as well as that of their food sources and habitat. The rapid rate of urbanization in Southeast Asia also contributes to the loss of their natural habitat.

In addition, wild bettas are more likely to encounter other fish, which increases the odds of them getting into a deadly fight, or ending up as food for larger fish. Bettas, though aggressive, are diminutive fish that swim rather slowly. This, unfortunately, makes them prime targets for predatory fish.

Before we address this subject, let’s make one thing clear – do not starve your betta! With that being said, healthy betta adults can go for up to two weeks without food. However, the maximum amount of time you should let your bettas go without food is 4 days.

After about 5-6 days, bettas start tapping into their reserves, which in turn increases their stress levels. This increases the likelihood of them contracting bacterial and parasitic infections due to a compromised immune system. Starvation can also lead to organ failure.

For all these reasons, we wouldn’t recommend letting your betta go without food for an extended period. Letting them go once a week without food is okay and even recommended, but fasting them frequently will hurt their well-being.

Many bettas are kept in a bowl that is far too small for their needs. Bettas kept in these conditions typically live for less than a year.

Small bowls allow ammonia and nitrate waste to build up rapidly, making your fish susceptible to a wide range of common betta diseases. This is because harmful bacteria and parasites thrive and multiply in ammonia-rich water. Poor water conditions also lower your fish’s immunity, making them more likely to fall ill.

How Do You Increase a Betta’s Lifespan?

Many factors come into play in determining a betta fish’s lifespan, and many of them can come under your control. While factors such as genetics are out of your hand, here are a few things you can (and should!) do to increase the lifespan of your new pets.

It is important to choose the right aquarium for your betta, especially if you intend to house them in community settings. Tanks that are too tiny make your fish susceptible to illnesses and increase the odds of territorial disputes.

Betta fish should be kept in a tank that is at least 2.5 gallons – assuming that you conduct water cycles and changes meticulously. A tank size of at least 5 gallons is recommended for a single fish – this maximizes your odds of keeping water parameters stable.

As fish that have been selectively bred for aggressive traits, male betta fish frequently fight each other over food, territory, and potential mates. For that reason, male betta fish should always be kept in separate tanks to keep them safe.

This is especially the case in a captive environment, where the “losing” party has little-to-no space to retreat to. Therefore, fights that take place between captive bettas usually end in death.

Though male betta fish have an aggressive streak, they are generally able to get along with peaceful freshwater fish that won’t pose a threat to their territory. Some examples include:

Female betta fish are less aggressive than their male counterparts and can be kept together in a tank where they can each carve out a space to call their own.

We highly recommend keeping your fish in a tank that is at least 5 gallons large, so that you can rely upon a heater and filter to maintain ideal water parameters.

Betta fish hail from tropical regions and will require a water temperature between 75-80°F. In addition, a low-flow, low-suction filter should be used to protect the betta’s delicate fins. Water cycles and changes should also be conducted regularly.

Some fishkeepers may opt to house their bettas in filterless settings. While bettas are capable of thriving in these environments, do note that it is much harder to keep unfiltered tanks clean. Test your water regularly, and bear in mind that water cycles will be more frequent and thorough compared to that of a filtered tank.

Bettas are active, lively carnivores that thrive on a protein-rich diet. In their natural habitat, they can be found foraging for insects and larvae, which are rich in fat and protein.

While insects and larvae may be difficult to obtain for your fish, the good news is there exists a myriad of specially formulated betta food on the market. These come in convenient flakes or pellets and will provide your betta with the nutrients it needs. You may also opt to supplement their diet with live protein sources such as frozen bloodworms and brine shrimp.

One thing to remember as you care for your betta is to never overfeed. Overfed bettas are susceptible to bloating and constipation, both of which are potentially life-threatening. Feed your fish with an eyeball-shaped portion of food twice a day, and remove any uneaten food from the tank.

We hope you enjoyed this article about how long bettas live, and how to increase their lifespan. Bettas make wonderful pets for fishkeepers of all levels, and we loved telling you more about them. If you found this article helpful, be sure to share it with a fellow betta enthusiast!

Given how loveable, gorgeous, and charming betta fish are, we certainly hope that you will consider adopting one for your home if it will make a good fit for your lifestyle. Have you ever had a betta fish? What was it like? Let us know in the comments below!

Wanda is a second-generation aquarist from the sunny tropics of Malaysia. She has been helping her father with his freshwater tanks since she was a toddler, and has fallen in love with the hobby ever since. A perpetual nomad, Wanda does her best to integrate fish-keeping with her lifestyle, and has taken care of fish in three different continents. She loves how it provides a nice break from the hustle and bustle of life.