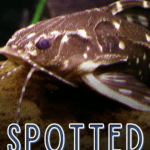 Catfish are popular options for freshwater aquariums, and a long-time favorite of mine is the polka dot catfish, commonly known as the Talking or Spotted Raphael Catfish. These lovely black catfish with white spots are reclusive during the day, but once your moonlight switches on you can enjoy their gregarious antics!

Introduction To The Talking Spotted Catfish

The black Spotted Raphael Catfish (Agamyxis pectinifrons) is a hardy and easy-to-care-for species that makes an ideal option for mid to large-sized freshwater and planted aquariums. Here’s a few quick facts about these vocal and friendly catfish:

Peaceful and shy; gregarious among themselves

The Spotted Raphael has an arrow-shaped, cylindrical body with a prominent head and flattened abdomen. Their wide mouth is surrounded by three pairs of delicate barbels. Armored with a thick, tough scaleless skin, they also have an upright spiny dorsal fin, spines on their pectoral fins and bony scutes along their lateral line:

Spotted catfish are a mid-sized bottom dweller that rarely exceed 5.9 inches in length. It’s thought that their average lifespan in the wild is about 10 years, but fishkeepers have reported these catfish can survive 15 to 20 years in captivity.

Talking spotted catfish are peaceful and somewhat shy community fish who spend the daylight hours hiding in your substrate or squeezed into crevices amid the rocks and driftwood in your tank. Since they are nocturnal, they rarely emerge under bright lights and are best observed in a deeply shaded tank or by using a moonlight.

Unlike aggressive species of catfish, the spotted Raphael won’t actively hunt the other members of the community, but they will opportunistically snack on smaller fish. You can keep a single catfish in your tank, but they prefer to be kept in groups of 3 to 5 and can be quite gregarious with each other at night.

How To Care For Your Spotted Raphael Catfish

It’s not difficult to care for these spotted catfish, since they are very hardy and tolerate a wide range of conditions. Let’s take a look at their ideal aquarium set-up and community!

Spotted catfish may hide during the day, but once the lights go off they are quite energetic in their activities. Here are the key requirements to having a healthy group of catfish in your tank:

While they aren’t very large, these catfish need plenty of room for hiding and scavenging food. They’re not suitable for Nano tanks, however, since you’ll require at least a 35-gallon tank for a single catfish. If you’d like to keep a group of 3 to 5 catfish you’ll need a tank of 55 to 75 gallons.

Spotted catfish do well at temperatures from 68 to 79°F, so you may or may not need a heater for your tank. They prefer slightly acidic water from pH 5.8 to 7.5 but are not overly sensitive to water hardness and tolerate 2 to 20 dGH.

Spotted catfish prefer well filtered and oxygenated water with a minimal rate of flow. You may need to baffle your filter to prevent strong currents in the lower parts of your tank. An air stone and pump is helpful for maintaining high oxygen levels. They don’t like bright lights and prefer tanks shaded with decor or floating plants. The best way to observe your catfish at night is with a blue LED or moonlight.

It’s best to use soft aquatic sand, soil or fine gravel as substrate in your tank to prevent your catfish from being injured by harsh gravel. Provide your catfish with plenty of large rocks, driftwood and branches to hide in during the day. Dense groupings of live plants can also provide shelter for juveniles, and the adults won’t damage or eat them.

Spotted catfish are sensitive to aquarium waste products like ammonia, so changing the water on schedule and keeping your filter maintained and filled with fresh filter media is crucial to their health. Monthly water changes are usually sufficient for these catfish in tanks 55 to 75 gallons, although smaller tanks may need them more often.

Talking Spotted catfish are omnivores and are not picky about their diet, and as scavengers they’ll help keep your tank clean of food scraps. To avoid overfeeding and problems with obesity, it’s best to feed them once a day near dusk:

While you can certainly keep your catfish in a single-species tank, their peaceful nature makes them an excellent option for midsize to large community aquariums. Avoid keeping your catfish with fish, shrimp or snails small enough to be a snack. Consider an Amazon-themed tank with medium to large fish like:

It’s thought that the talking spotted catfish is a bubble-nest builder, but we don’t know much about their reproduction behavior. Captive-bred fish are rarely available and have only been reported by breeders using artificial hormones to induce spawning.

Catfish are hardy fish that don’t typically have many health concerns (other than obesity from being overfed). They are susceptible to the water-borne diseases carried by your other fish and can contract illnesses like White Spot disease from the community. As scaleless fish, they are especially sensitive to medications that contain copper, so be cautious when medicating your catfish tank.

For a community tank that includes a group of 3 talking spotted catfish, you’ll need:

To feed your catfish, you’ll need:

Omnivore; Ideal diet is a mix of sinking catfish and spirulina pellets

Nocturnal and hides during the day; active scavenger at night

Peaceful, shy community fish but gregarious with each other

Well-filtered and oxygenated water with little to no current

Extremely difficult to breed in captivity

CIdeal for Amazon Basin communities with midsize to large fish like cichlids, tetras and gouramis. Avoid keeping with small fish or invertebrates

When it comes to catfish in aquariums, the peaceful and shy Spotted Raphael is a great option for community aquariums 35-gallons and up. They prefer to be kept in a group, though, and are a lot of fun to watch scavenging and playing together under a moonlight. Have you had a spotted catfish? We’d love to hear your comments, or join us on social media and share your aquatic community with the whole group!