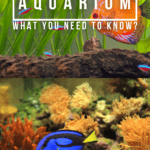 If you’re keen to get into the fishkeeping hobby, you might be wondering whether a saltwater or freshwater tank would be best for you.

When it comes to freshwater vs saltwater aquariums, it’s widely believed that a marine tank is more difficult to keep and maintain, so that it wouldn’t be the best choice for a beginner.

In this comparison, we look at the difference between saltwater and freshwater fish and discuss the pros and cons of a freshwater tank over the coral reef aquarium.

What’s the Difference Between Saltwater and Freshwater Aquariums?

As the names suggest, a saltwater aquarium contains saltwater, and a freshwater tank uses freshwater.

A saltwater tank can house tropical marine fish species, corals, sponges, anemones, and other organisms you typically find living in the ocean.

In comparison, a freshwater tank is a home to coldwater or tropical fish species and aquatic plants that cannot tolerate salinity.

Daily, weekly, and monthly, depending on setup and livestock

More expensive to set up and stock

Less expensive to set up and stock

Daily, weekly, and monthly, depending on setup and livestock

More expensive to set up and stock

Less expensive to set up and stock

What Are The Best Features Of A Saltwater Aquarium?

Probably the best thing about a saltwater aquarium is the variety of fish and other life that you can keep in one.

As well as a plethora of unusual fish with beautiful vibrant colors, you can keep some spectacular shrimp, anemones, corals, and other creatures, depending on the setup you have.

What Are The Pros And Cons Of A Saltwater Aquarium?

There are a number of pros and cons to keeping a saltwater aquarium:

First, let’s take a look at the pros of a marine setup:

Unfortunately, the disadvantages of keeping a saltwater tank tend to outweigh the advantages:

What Are The Best Saltwater Fish For Beginners?

Some saltwater fish species are a better choice for a newcomer to the hobby than others. I recommend the following as suitable marine fish for newbies:

All these fish are brightly colored and fascinating to watch, and they are often not as expensive to buy as rarer species.

What Are The Best Features Of A Freshwater Aquarium?

There are hundreds of different species of freshwater fish and inverts that can be kept together harmoniously in a community setup.

Also, freshwater fish species are not typically as expensive to buy as marines.

What Are The Pros And Cons Of A Freshwater Aquarium?

Here’s what’s great and not so great about keeping freshwater fish:

What Are The Best Freshwater Fish For Beginners?

Here are a few of the best freshwater fish species for beginners:

These fish are all fairly straightforward to keep and are reasonably priced, too.

So, how does the cost of setting up a saltwater tank compare with that of a freshwater aquarium? Let’s find out.

Here are the approximate costs of everything you need to get your tank up and running.

So, you can see that setting up a saltwater aquarium is going to cost you roughly twice what a freshwater tank would.

Also, you might only want a small tank, which will be considerably cheaper to buy than the 75-gallon minimum aquarium that you need for a marine setup. Smaller tanks often come in kit form, so you won’t need to buy separate lighting units, filters, and heaters.

Now you need to factor in the cost of stocking your tank with fish.

The cost of the fish and inverts you choose will vary depending on the rarity and size of the species.

You can generally buy most freshwater fish from a few dollars to around $10 per fish, and you often get deals on buying a group of fish, which is ideal for species such as tetras that naturally live in schools.

However, marine fish prices can start from $20 and upward. Basically, the sky’s the limit!

The running costs of freshwater and saltwater tanks are fairly comparable in terms of electricity. However, water testing kits for marine tanks are pricier than those for freshwater tanks. Also, you will need to buy salt for a marine tank, whereas you don’t need that for a freshwater setup.

Freshwater Aquariums Are Easier To Keep

Essentially, freshwater tanks are easier to maintain and keep healthy than saltwater setups.

Well, the oceanic environment tends to be much more stable than that of a freshwater river, lake, pond, etc. In the ocean, the pH and salinity remains pretty constant. However, in comparison, the water chemistry in a freshwater environment is constantly changing, perhaps due to seasonal changes such as drought or flooding.

So, freshwater fish species tend to be hardier and more forgiving of fluctuating water conditions than their saltwater cousins.

To a certain extent that’s true.

Saltwater fish and the equipment you need to keep them is more expensive than the freshwater equivalent. Beginners tend to make mistakes and fish mortality is common, so you could lose a lot of cash if you get it wrong.

Saltwater tanks can be complex, depending on whether you want to keep:

A fish-only tank is relatively straightforward, whereas a reef setup is very complex.

As previously mentioned, a marine tank needs to be larger than a freshwater one. So, maintenance requirements are more time-consuming.

All that said, if you start with a fish-only 75-gallon tank, pick an easy beginner fish species, and you’re diligent with your maintenance, it is possible for a beginner to keep marines.

A Saltwater Tank Can’t Convert To A Freshwater Aquarium

Yes, you can convert a saltwater tank to a freshwater one.

All you need to do is remove all the equipment and give the tank a thorough clean with dechlorinated water. Pay particular attention to removing accumulations of salt from the tank surfaces.

You Can Breed Saltwater and Freshwater Fish In Captivity

Most saltwater fish are wild-caught, which is one of the reasons they are so expensive to buy.

That’s because breeding marine fish in a captive setting is notoriously difficult. Saltwater fish breed seasonally, and that can be extremely challenging to recreate in the aquarium.

In contrast, many species of freshwater fish spawn readily in the home tank. So, a beginner can have lots of fun watching their fish produce eggs and live fry.

So, if you’re interested in breeding your fish, I recommend you choose a freshwater setup.

Algae Is A Bigger Problem In Saltwater Aquariums

Algae Is In all aquariums, the water contains nitrates that are created during the nitrogen cycle. Algae use nitrates as a nutrient source. Plants also absorb nitrates from the water, but living plants will only survive in a freshwater environment. Therefore, in a freshwater tank that contains live plants, algae are starved of the essential nutrients they need and cannot grow and spread as easily.AThat’s true! Bigger Problem In Saltwater Aquariums

Saltwater Aquariums Must Be Bigger

Saltwater doesn’t hold as much oxygen as freshwater. Therefore, you need a larger tank that provides a greater surface area for maximum gaseous exchange. So, you can’t keep as many fish in a saltwater tank, simply because there isn’t enough oxygen to support them.

Also, in a freshwater tank, you can include lots of plants. Plants produce oxygen and absorb CO2 through photosynthesis, helping to oxygenate the water for the fish.

So, if you want a small tank or lots of fish, a freshwater tank is a better choice.

If you’re a beginner and you want a small tank with quite a few colorful, hardy fish, a freshwater tank is the way to go. A freshwater setup is also cheaper to buy and run, as well as being less time-consuming in terms of maintenance. You could even breed your fish if you want to.

Aquarists with more experience and time available to devote to tank maintenance might enjoy the challenge of keeping saltwater fish. You’ll need plenty of space to accommodate a larger tank, and you won’t be able to keep as many fish. However, you have more species to choose from and most are much more vibrantly colored and interesting to keep. The biggest downside to marines is that the fish can be very expensive and tend to be more fragile than freshwater species.

Do you have a freshwater or saltwater tank? We’d love to hear about your aquarium! And please ask any questions you have in the comments box below.