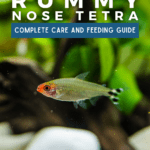 If you’re looking to add color and movement to a freshwater aquarium, why not consider a group of Rummy Nose Tetras? With their vibrant red faces, zebra-like markings, and interesting social behaviors, these peaceful fish really stand out in a community, but they have a reputation for being tricky to care for. Let’s take a closer look at these sensitive, red-nosed tetras and see what all the fuss is about!

Amazon Basin in Brazil and Peru

Energetic shoaling species best kept in groups of 6 or more

Very clean and well-filtered water, not sensitive to flow rate

Egglayer; challenging to breed in captivity

Ideal for planted tanks especially plants with very fine leaves. While they may snack on your plants, they usually don’t damage them or eat a lot of plant material

The Brilliant Rummy Nose Tetra (Hemigrammus bleheri) is one of the most popular and widely available fish in the aquarium trade. Also known as the Common Rummy Nose or Firehead Tetra, these small but energetic fish are one of three nearly-identical species sold under the trade name “Rummy Nose.”

Brilliant Rummys are often billed incorrectly as nano fish suitable for tiny aquariums or recommended for new aquarium keepers. While they’re not hard to care for, they’re one of the more challenging tetras and are not a good choice for new aquariums or very small set-ups:

Rummys are native to the Amazon region of South America. These small fish live in slow-moving freshwater streams and shallow rivers where they feed omnivorously on plant materials, crustaceans, worms and insects, eggs and larvae:

While there are at least three known species of Rummy Nose, we don’t know very much about them. Wild-caught juveniles are usually identified based on their capture location (if known), while captive-bred fish are assumed to be the same species as their parent stock:

Rummy Nose Tetras have a long, torpedo-shaped body, which hints at their strong swimming abilities, and really beautiful colors and markings:

Since the three species look nearly identical, even experts have trouble telling them apart without a close examination. We’re still learning about the subtle differences between the species. Both Common and True Rummys have the black spot on the lower part of their caudal peduncle, which the False Rummy lacks.

Adults range from 1.25 to 2.5 inches in length, while juveniles are usually sold when they’re 1 to 1.5 inches long and before they’ve developed their adult coloration. You may not know which type you have for sure, and might even end up with a mix of species if you buy fish from several sources.

Rummy Noses usually live for 5 to 8 years in captivity, but it depends on their water quality and care. Since they mature slowly, it’s not uncommon to see adult fish for sale in stores, so you may not know their age at the time of purchase.

Rummy Noses are active and strong daytime swimmers who spend most of their time in a group or shoal in the middle part of your tank. They get depressed and lose color when kept on their own, but overall they are outgoing, peaceful, non-aggressive fish ideal for community aquariums.

Rummys aren’t the only tetras who like to school, but with their bright red heads and zebra stripes, they create some amazing and dramatic patterns inside your tank! You’ll need at least 6 tetras to start a shoal but aim for 15 to 30 if you want to enjoy the full range of their social shoaling and schooling behaviors.

How To Care For Your Rummy Nose Tetras

These red-nosed tetras are tricky to care for because they are very sensitive to their water quality and have narrow parameters in which they thrive. In some respects, they’re similar to the Neon Tetra, which also prefers mature aquariums, but Rummys tolerate less fluctuation in their temperature and water chemistry.

You’ll need to set-up your aquarium 3 to 6 months prior to introducing a group of red-headed tetras. These fish can’t handle new or cycling aquariums!

As very active and energetic swimmers, Rummys do best when they have at least 2-gallons capacity per fish. Since the smallest group you can keep is 6 to 10, I recommend starting with a 20 gallon or larger aquarium, although it doesn’t matter if you opt for a long or tall-style tank.

As mid-level swimmers, tetras do well with any type of sand, soil, or gravel substrates suitable for freshwater tanks. Avoid using marine products that contain calcium carbonate, since that raises the mineral levels and increases the hardness. If you’re trying to recreate their natural habitat you can use a mix of sand and small pebbles or fine gravel, or go with commercial aquatic soil to boost the growth of your live plants.

Rummy Noses are tropical fish and prefer temperatures from 75 to 84°F, so you’ll need an aquarium heater. They do best in slightly acidic conditions with a pH of 6.2 to 7, and don’t tolerate hard, calcium-rich water at all. You’ll need to measure and maintain a hardness of 2 to 6 dKH and may also need to monitor the calcium, especially if you plan on breeding your tetras.

Since Rummys are very sensitive to their water quality and get stressed when exposed to toxins like ammonia, nitrite, and nitrates, you’ll need a robust HOB or canister filtration system to keep your tetra tank clean. For larger aquariums (40+ gallons), you might need multiple filters and may also benefit from using an air stone to increase circulation and water oxygenation.

Rummys prefer aquariums with live plants but still, need open areas to swim and socialize in. They especially enjoy fine-leaved varieties such as Cabomba (Carolina Fanwort) and Myriophyllum species like Parrot-Feather. You can place plants around the edges of their open areas, so they can explore or school as they choose.

These tetras don’t enjoy bright lights, and they’ll stay near the vegetation if the light levels bother them. You can shade their swimming areas with tall or floating plants and use piles of rocks and driftwood to darken the tank.

Maintenance Is Key To Healthy Tetras

Rummys need very clean water, so even with high-quality filtration, it’s still best to do weekly water changes to avoid causing them any stress. Your filter media should be changed every few weeks as well and might benefit from using a mix of zeolite and carbon depending on how many fish you have in your community.

They’re sensitive to less-toxic nitrates as well, so even mature aquariums require regular testing and maintenance to ensure toxins stay at undetectable levels. This is especially critical for young fish and breeding stock since even mild exposure to toxins or minerals like calcium can cause sterility.

Rummys are omnivores and not picky about what they eat. Offer them a high-quality omnivorous flake or floating food as their primary diet and supplement with a few treats a week. I usually feed tetras one meal a day for 6 days and then fast them one day a week, to mimic their natural eating pattern.

To avoid obesity and health problems, it’s best to offer a variety of treats in addition to their primary commercial diet. You can alternate feeding protein-rich treats of live/frozen/dried brine shrimp, bloodworms, Daphnia and crustacean eggs with algae flakes, spirulina pellets, and fresh blanched veggies like zucchini and spinach.

Rummy Nose Tetras are easy-going and non-aggressive fish, so you have a huge number of possibilities when it comes to choosing their tank mates. They’re ideal for communities with other small and peaceful fish and do well with many types of bottom dwellers. Your options include but are not limited to:

Avoid keeping your tetras in a semi-aggressive or aggressive community or with larger fish that may prey on them.

Theoretically, these egg-laying tetras shouldn’t be too difficult to breed if you have a large enough group of 4 to 12-month old fish in a 40-gallon planted breeding tank. Raise the temperature to 84°F, feed a protein-rich diet for a few weeks and the group should come into season and spawn.

Female tetras lay a few large eggs in a folded leaf where they’re inseminated by a male. The fry usually hatches within 24 hours, but barely moves for the first week and grows very slowly. You’ll have to carefully feed them drops of infusoria until they’re large enough for brine shrimp nauplii.

But in truth, it’s incredibly hard for non-professionals to breed Rummys and most attempts fail for a few reasons:

If you’re diligent in your feeding and maintenance routines and closely monitor the conditions inside your tank, your Rummy Nose tetras should thrive in your community. Common health problems include the parasitic White Spot Disease and dropsy, or fluid build-up in the abdomen.

Most health problems can be avoided if you feed a balanced diet, practice good aquarium hygiene, and quarantine new plants and fish before introducing them to your community. One advantage of having Rummys in a tank is they’re a great indicator species since they lose their vibrant red color when stressed!

To set-up a small planted tank appropriate for a shoal of 10 Rummys and other community fish, you’ll need:

To feed your tetras, you’ll need:

To care for your fish and plants, you’ll need:

While Rummy Nose Tetras can be a little challenging, once you’ve mastered their ideal water parameters you’ll see that they’re not very hard to care for. I’ve kept groups of red-nose tetras in my community tanks for years and never had a problem. What do you think of these beautiful schoolers? Share your thoughts in the comments below or join the bigger community online!