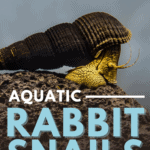 Algae-eating snails are a functional option for peaceful planted aquariums, but they rarely stand out in mixed communities. If you’d like an invertebrate that’s social, curious and colorful, then check out our guide to the stunning Giant Sulawesi or Rabbit Snail and see if they’re a good fit for your tank!

Introduction to the Rare Rabbit Snail

If you’ve never seen a tank of Rabbit Snails (genus Tylomelania), you might wonder what all the excitement is about. While most snails are added to aquariums for their algae-eating abilities rather than for appearance or personality, Rabbit Snails are different. Let’s take a look at what makes the Rabbit such an impressive invertebrate:

Multiple species in the Tylomelania genus

Rabbit snails first became available for sale in the US in 2008 and are still rare and hard to find in most aquatic shops. These vivid invertebrates are found in warm, freshwater lakes and streams throughout Sulawesi, Indonesia, and are native to Lake Poso and the Malili Lake systems:

Rabbit snails are usually sold as 1 to 2-inch juveniles, and they can quickly reach 3 to 5 inches in length in a warm aquarium, hence their nickname as the Giant Sulawesi. Similar in shape to the Malaysian Trumpet Snail (MTS), Rabbits have a spiraling, conical shell that looks like an inverted unicorn horn.

Their most distinguishing feature is the appearance of their muscular ventral foot, which is the soft part of the body that extends outside their shell. Between their long, wrinkled proboscis and droopy tentacles, their faces display a range of comic expressions that makes them resemble a stuffed rabbit or elephant toy!

These snails are sexually monomorphic, so you won’t be able to discern a gender from their appearance. An interesting feature is the noticeable groove that runs down the right side of their soft body, from the shell to the edge of their foot. This is the transfer groove the encased embryo travels down during the birthing process!

Rabbit snails are available in a stunning range of colors for both shell and soft body, and may have additional spots or slashes of color on their ventral foot that further emphasizes their comical, elephant, or bunny-like appearance. Species vary widely in their shell textures, colors and markings, but overall:

When shopping for these rainbow-colored invertebrates, keep in mind they may be sold under a variety of names since the specific species is rarely known. The most common types I’ve seen for sale in the US include:

Rabbit snails typically live for 1 to 3 years in an aquarium setting, but you may be able to keep them even longer in spacious set-ups if you pay diligent attention to diet and water quality.

Rabbit snails are active daytime grazers who use all parts of your tank and even burrow in the substrate. They’re not shy, and with their bright colors, large size and outgoing personality, you’ll easily be able to spot them in your tank most of the time:

How to Care for Your Rabbit Snail Tank

Rabbit snails are generally easy to care for and make an ideal choice for new fish keepers, but these giant-sized invertebrates do have a few requirements you’ll need to meet if you want to maintain a healthy population.

Unlike their MTS cousins and many other popular aquatic snails, Rabbits are not suited to small or Nano aquariums or simple fish-bowl habitats. What kind of set-up do you need for a group of giant snails who might grow nearly half-a-foot in length?

Rabbit snails do best in spacious aquariums. While you could probably get away with keeping a single snail in a 20-gallon tank, I recommend at least 30-gallons capacity for two snails, and bigger is the way to go if you can. You can go with any shape you prefer, so feel free to get a portrait-style or long breeder tank if you’d like.

Since Rabbit snails do burrow into their substrate at times, it’s best to use aquatic soil or fine sand instead of coarse aquarium gravel in your snail tank. This will make it easy for them to dig and prevent any injuries to their soft bodies or muscular feet. These snails are not a good option for bare aquariums, however.

While Rabbits can survive in water from 68 to 84°F, they definitely prefer warmer water between 76 and 82°F. Their metabolism slows down, and they may not be as active or grow as large if you’re not using a heater. They need hard, alkaline water with a dKH of 2 to 15 and pH from 7.3 to 8.2.

Giant snails produce a lot of waste and are very sensitive to ammonia and nitrate poisoning, so they do best in fully-cycled, mature tanks. I’d avoid adding them to new set-ups, but if you do, be sure to test the water regularly until your bacterial populations are well established (3 to 6 months):

Rabbit snails may avoid brightly-lit areas of your tank, but this is usually a behavior seen in wild-caught adults instead of captive-bred juveniles. Young snails become accustomed to bright aquarium lights, although they may still prefer to graze in the shaded parts of your tank.

These snails are ideal for planted aquariums and enjoy feeding on rotting plant materials, but they are so big they may have problems moving through dense vegetation. It’s better to space your plants out to give them more room. You can use natural decor like rocks, bogwood and sticks, or any other decorations you prefer.

Snails are very sensitive to dirty aquariums, so you’ll want to be sure to change your aquarium’s water, clean your filters and replace the filter media on a routine schedule. You’ll also need to vacuum your substrate regularly to prevent a build-up of waste in the bottom of the tank.

As algae-eating omnivores, Rabbit snails need both plant and animal foods, but not in equal amounts. If you’re keeping them in a mixed community with omnivorous fish or freshwater shrimp they’ll likely scavenge plenty of protein on their own. Balance their diet of tank algae with a daily meal and a few weekly treats:

The best tank mates for giant snails are other peaceful, non-aggressive community fish and invertebrates. Look for animals that won’t bother your snails or their small offspring. You can even keep adult Rabbit snails with Assassin snails, although they will eat any babies. Ideal tank mates for Rabbit snails include:

Avoid keeping your Rabbits with semi-aggressive or aggressive tank mates like cichlids or barbs, or any animals that might feed on snails, like crayfish, loaches and even goldfish.

The viviparous Rabbit snails are a little more challenging to breed than other freshwater snails, but only moderately so. They reproduce much slower than egg-laying species, so they won’t fill your tank with offspring. Rabbit snails are dioecious and have two distinct genders, even though males and females appear identical:

Gestation varies by species, but Rabbit snails tend to give birth every 4 to 6 weeks on average. Changes in the environment may prompt the birthing process, so it’s not uncommon for snails to drop babies during shipping or right after moving into a new tank. Warmer water conditions (80°F+) increase breeding activity as well.

The biggest issue I’ve seen with Rabbit snails is their propensity to be infested with leeches. You’ll have to observe your snails closely and quickly remove any leeches you see hiding on their soft bodies. Some may hide under the shell, so it can take a few weeks to completely clear an outbreak.

Rabbit snails are also prone to problems with their shells and are sensitive to many medications. Like all aquatic snails, they need mineral-rich water to support healthy shell development:

To support a breeding population of Rabbit Snails along with a nice variety of small fish and invertebrates, here’s a list of the things you’ll need to set up a great snail tank! Once it’s finished cycling (3 to 6 months), you can start adding your Rabbit snails:

To establish your aquarium, you’ll need:

To feed your snails, you’ll need to grab:

Ideal tank mates are other peaceful and non-aggressive fish and invertebrates like tetras, rasboras, gourami, small freshwater shrimp and other snails. Avoid keeping with cichlids, crayfish, loaches or goldfish

Have you ever had a Rabbit snail, or have we convinced you to give them a try in your mature tank? We’d love to see your thoughts on these big, beautiful and funny-looking snails, so toss a comment below or come join our bigger community online!