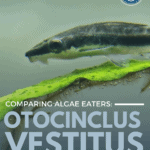 Nearly any freshwater aquarium can benefit from an algae eater like the Dwarf Sucking Catfish. Ideal for nano tanks and planted communities, the little herbivores in the Otocinclus genus are peaceful and active eaters of algae. Between Otocinclus vestitus vs vittatus, is the Silver or Common Oto a better choice for your tank?

Grey, mottled top half of the body with a thin horizontal lateral line running from the snout to the base of the caudal peduncle

Dark horizontal line running down the lateral line from snout to the caudal peduncle, with a bold white line right above

Tributaries of Rio Ambyiacu in Peru

Grey, mottled top half of the body with a thin horizontal lateral line running from the snout to the base of the caudal peduncle

Tributaries of Rio Ambyiacu in Peru

Dark horizontal line running down the lateral line from snout to the caudal peduncle, with a bold white line right above

When it comes to algae-eating fish, there’s few that can match up to the friendly, shy little herbivores in the Otocinclus genus. Native to small rivers and streams across South America, these peaceful and easy-to-care-for fish are an ideal option for planted community aquariums 10 gallons and up.

What Are Otocinclus Fish?

Otocinclus (pronounced Otto-sin-klus), referred to as Ottos or Otos in the aquarium trade, are a genus of small herbivorous suckerfish in the Loricariidae or armored catfish family. They are a popular option for aquariums of all sizes due to their peaceful nature, entertaining shoaling behaviors and their algae eating abilities.

These fish are especially regarded for their ability to consume problematic diatomic (brown) algaes and are often purchased in groups or shoals of 3 to 6 to prevent algae outbreaks. They are rarely if ever bred in captivity, so fish available in stores have usually been captured as juveniles from native populations.

Since most fish derive from wild stock, they are frequently identified under the generic name “Otocinclus” rather than being properly labeled by species. Even when species names are used in stores, they are often incorrect. Many novice fish keepers (and sellers) have no idea that there are multiple species of otos!

How Many Species of Otos Are There?

Otos are practically must-have fish for planted aquariums, since algae is so easily introduced along with your live plants and outbreaks can be hard to treat once it takes over. But which species of Oto should you look for, and does it matter in terms of their size, appearance, or algae-eating performance in your tank?

There are 19 recognized species in the Otocinclus genus, but only a handful are typically available in the US aquarium trade. These algae eaters usually grow between 1 to 2 inches in length and have a mix of brown, grey, and silver-colored markings. The five species you’re most likely to come across in the US include:

Which Species of Oto Is the Best Algae Eater?

There’s no appreciable difference between the species in terms of their algae consumption or personalities. I’ve noticed that many big-box stores don’t even identify which species they are selling, and instead just have generic “Otocinclus” tanks, so you may not even know which type(s) you have in your shoal!

It can be difficult to tell the species apart in a mixed tank, and in some cases nearly impossible without using a microscope to examine their lateral line for minute differences. Let’s take a second to compare the Common Oto and the rarer Silver Oto in terms of their appearance and care requirements.

The definitive way to correctly identify species of Otocinclus from each other depends on knowing the location they were collected from in the wild. While populations of Otos are found in streams throughout South America east of the Andes, the species inhabit distinct territories with little known overlap:

There aren’t many differences between species of Otos in terms of their care requirements. Aquarium algae can’t provide them with a balanced diet, so supplement your Otos with commercial algae wafers and spirulina pellets, and provide regular treats of fresh blanched veggies like zucchini, peas and cucumber.

The one notable difference between the species are their preferred temperature ranges, which do vary a bit depending on their location of origin. In general, Otos do well in water between 72 to 82°F. But the Common Oto does better in cooler water from 70 to 79°F, while the Silver’s prefer things a bit warmer at 77 to 86°F.

It doesn’t really matter which species of Otocinclus you end up with, since both the Common and Silver Otos are similar in size, behavior, temperament and diet. You may prefer to search out the rarer Silver species if your tank’s temperature is over 80°F, since they like it warmer, but either species is a great option for planted aquariums!