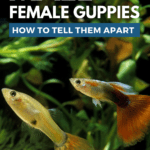 Fancy Guppies are lively, brightly colored little aquarium fish that make the perfect addition to a peaceful community setup. Guppies are also known as Millions fish because they breed so prolifically in the home tank.

Is the male Guppy the prettiest of the two sexes? Is one female guppy to one male a good ratio to have in your aquarium? What’s the difference between male and female Guppies when it comes to coloration and finnage?

In this guide, we compare male vs. female Guppies so that you can tell the boys from the girls!

What’s The Difference Between Male And Female Fancy Guppies?

Telling male and female Guppies apart is pretty straightforward even at an early age.

Essentially, it’s the male Fancy Guppy that has a luxuriant, flowing tail that’s always a riot of beautiful colors. Female Guppies are usually a silvery-gray color and lack the extravagant finnage of their male counterparts.

It’s actually pretty easy to tell male Guppies from female Guppies once the fish reach adolescence. Unlike many fish species, the difference between the sexes in Guppies is very obvious.

However, it’s next to impossible to separate the boys from the girls when the Guppies are just tiny fry. Fortunately, Guppies grow and mature incredibly quickly, and after only a week or so, you can usually tell the difference. If you use a magnifying glass, you can often pick out the gravid spot on the females.

Now, here’s a direct comparison between the male Fancy Guppy and the female.

Let’s take a look at the male Guppy first:

So, what do female Guppies look like in comparison?

Wild Guppies don’t look at all like their fancy captive-bred cousins.

In nature, Guppies are much smaller and somewhat dull in color. Wild female guppies are usually gray or brown with virtually no coloring on their fins. The females’ skin is covered with melanophores, black pigment cells that enable the fish to rapidly change color, probably as camouflage against predators.

The Fancy Guppies that you see in fish and pet stores are commercially raised for their size, colors, and flamboyant finnage. The colors vary, depending on what strain of Guppy you’re looking at, and include many variations of pastel and solid colors and patterns.

Male Guppies can boast a wide range of tail forms, including the split lyretail, fan-shaped delta, ribbon-shaped thin tail, round tail, and single and double swordtail.

Male and female Fancy Guppies are peaceful, active little fish that can make a great addition to a community tank. However, when you have a tank full of male and female Guppies that are mature enough to breed, things can take a turn for the worse.

Well, the problem is not that the male guppies are aggressive, but it’s just that they are incredibly persistent. So, if you have too many males and not enough females, it’s quite possible that the males will harass the poor females to death.

That’s why some hobbyists keep their male and female Guppies in separate tanks. However, you can still enjoy the fun of breeding generations of Fancy Guppies without the carnage if you stick to a ratio of at least two females to one male, preferably more.

Guppies are as fascinating as they are beautiful. Here are some of the most commonly asked questions about Fancy Guppies; you may be amazed by some of the answers!

Q: When do Guppy fry get their bright colors?

A: Male Fancy Guppies are renowned for their brilliant colors. Usually, it takes between four to six weeks for male Guppies to fully develop their adult colors and patterns, although you can often get a rough idea of how the babies will turn out within a week or two of the fry being born.

Q: Can water conditions determine the sex of Guppy fry?

A: Although research in this area is generally limited to commercially produced species of fish for the human food chain, there is evidence to suggest that water temperature can heavily influence the sex of fry.

In commercial fish farms, the process of using water temperature to determine fry gender is known as thermal manipulation. Generally, it’s observed that breeding fish in lower temperatures results in higher numbers of female fry, whereas male fry is more numerous when the water temperature is higher.

Well, it seems that the determination of the sex of the fry is triggered by the thermal control of certain enzymes.

Q: Can female Guppies become pregnant without a male Guppy?

A: Interestingly, female Guppies can still give birth to young every month even after being separated from male Guppies for six months!

Female Guppies are able to produce several broods of fry consecutively without a male being present each time. That’s because the female’s genital area has special folds where the male’s sperm is stored to be used later for fertilization.

The average number of fry that a female Guppy produces is generally between 20 and 40, depending on the female’s size. That said, according to Hemdal, 2003,  one female Guppy at the Chicago Shedd Aquarium gave birth to 244 fry in one brood, 238 of which survived.

Q: How can you get a clearer view of the gravid spot?

A: Guppies are livebearers, giving birth to fully-formed, independent fry. Female Guppies have a gravid spot.

The gravid spot is a darkened triangular area that you’ll see under the fish’s tail close to its anus. The spot becomes larger and darker when the fish is pregnant.

To get a clearer view of the gravid spot, view the fish through a magnifying glass. Alternatively, take a photo of your Guppy with your Smartphone and zoom in to view the fish up closer.

When Guppies are in the advanced stages of pregnancy, you can sometimes get a view of the fry inside their mother. Darken the tank, and shine a light behind the fish. You might be able to see the tiny fish try moving around inside!

I hope you enjoyed our guide on how to tell the difference between male and female Fancy Guppies. If you did, don’t forget to share it!

It’s next to impossible to tell the difference between male and female Guppies until they reach a week or so old. When the fish are a few weeks old, you can start to determine the different sexes.

Male Fancy Guppies are smaller and thinner than females, and they have beautiful flowing dorsal and caudal fins, which are lacking in the female. But the most obvious difference between the two is the male Guppy’s brilliant coloration! You can find Guppies in virtually every color of the rainbow and with some pretty fancy tail shapes, too.

In comparison, female Guppies are larger, rounder, and rather drab in color with a short tail and rounded dorsal fin.  Did your Guppies breed? What surprising and amazing colors did the fry turn out? Did you get more female than male fry? Tell us in the comments box below!

You might be curious how long guppies live. Read our article about it here.