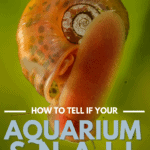 Ornamental aquarium snails make a beautiful addition to any freshwater fish tank. Snails are useful too, eating algae and cleaning up general detritus from the substrate that would otherwise pollute the water.

But sometimes, a snail appears to be lifeless when in reality, it’s merely taking a nap. So, how do you tell if a snail is dead? Do snails sleep? For how long do water snails live? And for how long can snails sleep?

Read this guide to discover the answers to all those questions and more!

How Can I Tell If My Aquarium Snail Is Dead?

Snails are fascinating and peculiar aquatic creatures whose behavior can be perplexing until you get to know more about their habits and behavior.

Aquatic snails can be pretty inactive for a lot of the time, and they do sleep. Some species readily climb out of their tanks in search of a dark place to snooze, whereas others prefer to retract into their shells for a nap. Many species of snails can remain inactive for up to a week, not moving at all. Who knew?

However, if you spot one of your snails laying on the bottom of the tank, apparently inactive, you may wonder if it’s dead. Detecting mollusk mortality isn’t straightforward, but here’s how to tell a snoozing snail from a dead one.

Is My Floating Snail Dead?

Many species of aquarium snails, such as mystery snails, float from time to time, which doesn’t necessarily mean that your snail is dead.

Snails can store air inside their shells, which gives them sufficient buoyancy to float. In nature, some snail species float on the water surface deliberately to be borne along by the current and, therefore, travel faster, perhaps in search of better feeding grounds.

In captivity, hunger is a common cause of snails floating at the water surface, often upside down, as they try to get at floating scraps of food. Many people assume that snails can survive on algae alone, but they can’t. So, be sure to supplement your snails’ diet with veggies and other high-calcium foods to help keep the snails’ shells in good condition.

If you’re concerned that a floating snail is dead, gently lift it out of the water and sniff the shell.

When a snail dies, it decomposes very rapidly inside its shell, and that creates a stink that’s akin to roadkill on a hot summer’s day! Like most dead organic matter, snails smell especially bad when they’ve been dead for a while. Take a sniff of the snail’s shell, and you’ll quickly get a nostril full of a stench like rotting food or blocked drains.

Also, if you test your tank water, you’ll most likely discover an ammonia spike. So, as soon as you’ve removed the dead snail, you need to carry out a partial water change before re-testing the water.

If there’s no obvious smell from the snail’s shell, sniff the creature’s foot. The foot is the small, flat area underneath the snail’s body that acts as a kind of trapdoor to the mollusk’s shell. If the foot smells pungent and rotting, then the snail is most likely dead, although poor water quality can cause the snail to smell bad, too.

So, if your snail has a stinky foot but is still alive, test the water quality in your tank, and carry out a partial water change if necessary.

Very young snails and those species with thin shells can be examined for a heartbeat. Put a bright flashlight behind the snail, and you may be able to detect the animal’s heartbeat.

If you’re still not sure if your snail is dead, lift it out of the water and very gently try to pull the foot back toward you. If the snail is alive, it will immediately retract its foot back inside its shell.

Finally, put the snail onto a piece of flat plastic outside the tank and watch it closely for a few minutes. If the snail is alive, it will come out of its shell and begin to move around in search of water, whereupon you should replace the snail into your tank immediately.

Is Your Snail Sleeping Or Dead?

Aquatic snails are often completely inactive for a while after eating a large meal. During this time, the creatures sleep while the food is digested. If you have assassin snails, you should know that they can remain asleep for several days after a meal before they begin moving again.

Generally, after enjoying a few hours of rest, the snail will start moving around the tank again.

If your snail isn’t moving and remains stuck to the aquarium glass or decorations, it’s most likely sleeping, hibernating, or resting. A dead snail would merely fall off the glass and lay upside down on the substrate.

For How Long Do Snails Sleep?

The duration of snail sleep varies from one species to another. Some sleep for several days at a time, although most snails sleep for around 13 hours, split across seven small nap periods. Some species of land snails can sleep for up to three years!

Interestingly, if the snail’s sleep is interrupted, it will continue to be active until the next sleeping pattern starts.

Snails are diurnal, remaining active during the day and sometimes at night, too, probably in line with the availability of food, the quality of the water in the tank, and the habits of the other tank residents.

Why Do Snails Die?

There are a few reasons why snails die:

Nerite snails are often sold as freshwater algae eaters. However, these exotic, beautiful snails come from the Indian, Pacific, and Caribbean oceans or from brackish swamps and lagoons. So, these snails are marine creatures that cannot survive in freshwater.

Unfortunately, these poor snails won’t live long in a freshwater tank. Only one species of nerite snails, Theodoxus danubialis, lives in a freshwater environment in nature. However, that species isn’t found in the pet trade and is considered endangered in the Czech Republic, Austria, and Germany, where the snail is found in nature.

Intertidal species of creatures need to periodically relocate from an underwater environment to an exposed surface. If the nerites can’t get out of the water to satisfy that need, they quickly succumb to stress and disease and usually finish up dying.

What Is The Lifespan Of An Aquarium Snail?

The lifespan of an aquarium snail depends on the species of snail and on the water temperature in your tank. The warmer the water, the faster the snails’ metabolism runs, so the shorter its lifespan will be.

What Happens When A Snail Dies?

When an aquarium snail dies, as you would expect, it decomposes, although somewhat more quickly than other living organisms in your tank. The decomposition process releases ammonia into the tank water, polluting the environment and potentially harming the inhabitants of your tank.

What To Do With A Dead Snail

Although you could leave the dead snail in your aquarium for scavengers, such as hermit crabs, to eat, I advise you to remove the snail immediately. The longer the dead snail remains in the tank, the more quickly the water quality will deteriorate.

How Do I Dispose Of A Dead Snail?

There are two options for disposing of a dead snail.

Your first option is to put the snail in a Ziplock bag, seal the bag, and put the whole lot into your outside garbage can.

The second option is not for you if you’re squeamish! Take a penknife and remove the snail’s corpse from the shell. Wash the shell thoroughly, and replace the shell in your tank for hermit crabs to use as a home.

How Can You Improve The Health Of Your Aquarium Snails?

Just like your fish, snails require clean, well-filtered, well-oxygenated water to remain healthy. So, be sure to maintain your aquarium filtration system properly, carry out weekly partial water changes, and vacuum the substrate thoroughly to keep the environment clean. Snails prefer a pH level of close to 7.0 and will tolerate a water temperature of between 65° and 82° Fahrenheit.

Even though they’re small, your snails should have at least two and a half gallons of water each. That allows plenty of space for each snail to forage in and helps to ensure that the mollusks won’t go hungry.

If you want your snails to breed, leave a six-inch space below the tank lid or cover slide where the creatures can lay eggs. Check the aquarium lid and plug any gaps through which the snails could escape. Although aquatic snails can survive for a little while out of water, they will eventually dehydrate and die.

Choose tankmates carefully if you keep snails. Avoid fish species that prey on snails, such as puffers, cichlids, goldfish, and certain catfish.

Now you know how to tell if your aquarium snail is sleeping, hibernating, or deceased. Snails, just like fish, need proper care and a correct, nutritious diet. If you look after your snails, they will help to keep your aquarium clean and free from algae, as well as adding extra interest and another dimension to your fish tank ecosystem.

If you enjoyed our guide, please share it with your friends, and don’t forget to let us have your thoughts and comments in the box below!