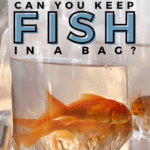 If you’re new to fish keeping, you may be surprised to see your pet fish placed in a plastic bag for the trip home. This is by far the most common method of transport, but how long can fish stay in the bag from the pet store, and what’s the best way to shift them into their permanent abode?

How Long Can Fish Stay In A Plastic Bag?

We’ve all brought home new fish from the pet store in those heavy-duty plastic bags filled with water and air, but have you ever wondered how long fish can survive in a bag? It depends on a host of factors, but in general, fish can easily survive in a bag for about 7 to 9 hours comfortably, and possibly up to two days.

There’s more to this method of transport than meets the eye, however. Pet stores usually fill their bags with about ⅓ water and top them off with oxygen instead of air from the room. If you’re trying to duplicate this method at home there’s a few things you’ll need to take into consideration before you pack up your fish.

Factors To Consider When Keeping Fish In Bags

Transporting fish in plastic bags is not a new method; it’s been the standard for well over 30 years. Breeders ship fish to stores in these bags, and if you order fish online that’s how they’ll arrive at your mailing address. The length of time you can keep fish in a bag depends on multiple factors, including:

Why Is Oxygen So Important?

Like us, fish require oxygen or O2 for respiration (breathing), and their gills are adapted to absorb oxygen from the water they’re swimming in. Some fish, like bettas, also have an organ that allows them to breathe the air above the waterline, so they can survive longer in stagnant water.

Hypoxia (lack of oxygen) can be a real problem in aquariums, which is why we use filtration systems and devices like air stones to maintain high levels of O2 in our tanks. When fish are kept in closed containers, it doesn’t take very long before they’ve essentially used up all the oxygen in the water and air and begin to suffocate.

Fish Survive Longer In Bags Filled With Oxygen VS Air

How much O2 does the air around us contain? You may be surprised to learn that the air at sea level is actually 78% nitrogen and only 21% oxygen, and as you gain altitude and lose atmospheric pressure the O2 molecules spread further apart, so it becomes harder to breathe without panting.

If you pump regular air into your fish’s bag for transport, they’ll start to feel the effects of hypoxia about 4 times sooner than if you filled it with 100% oxygen. That’s why pet stores and aquatic shops use pressurized O2 to fill their bags instead of pumping them full of room air.

Larger fish consume more O2 than smaller fish, and multiple fish will use up the oxygen in a sealed bag faster than a single fish. If you’re relocating your aquatic community it’s best to give each fish their own bag so they’re not competing with each other for oxygen.

If the trip is a short one, you could bag several fish together as long as they’re similar in size and there’s plenty of space, but it could be stressful for them if you hit any delays in setting up the new tank. Since you’ll likely not have an O2 tank handy to fill your bags and will have to use air, it’s safer to give them each their own container.

You may have noticed that pet stores only fill fish transport bags about ⅓ of the way with water, so more than half the bag is pumped full of oxygen. As your fish use up the O2 dissolved in the water, more is absorbed from the air in the bag. Filling the bag with pure oxygen helps maintain comfortable O2 levels for your fish.

Larger bags can hold more oxygen than smaller ones, assuming you’ve used the same proportion of water to air. Placing a small fish in a large bag will extend the period they can be safely and comfortably kept sealed inside. Using a large container can also help compensate for not being able to fill the bag with pure O2 at home.

Bags And Containers For Transporting Fish

What type of container should you use to transport your fish, and does it matter what type you choose?

Ziplock bags seem like a convenient way to transport fish, but I really don’t recommend using them if you can find a better alternative. The bags are not very sturdy and can easily leak, and they are too narrow at the bottom to comfortably hold most types of fish. Your fish will likely be stressed and cramped in a ziplock.

If you need to use ziplocks, I recommend limiting the amount of time your fish is in the bag to about 30 minutes. You won’t be able to fill them with as much air as other types, so your fish won’t be comfortable in them for long. Always use a new bag and recycle it when you’re done; it’s not really a good idea to reuse the bag afterwards.

Professional fish breeders and aquatic stores prefer to transport fish in the heavier plastic bags known as “Polybags.” Made from polythene, they are usually 1.5 to 3mm thick and have a wide, rather flat bottom when filled. They’re the ideal shape for transporting fish over long distances.

Polybags are usually 3 to 4 times as long as they are wide, which allows you to pump the maximum amount of air or oxygen into the bag. Once the bag is filled and sealed tightly with a rubber band, you can tape the bottom corners up for safety and turn the bag on it’s side (see Transport below), and it shouldn’t leak.

It can be tempting to use a hard plastic container to transport your fish, since these seem like they would be the sturdiest choice, but there’s several reasons they aren’t the best option:

I don’t recommend transporting fish in hard, sealed containers, even for a short period of time. It’s risky. If you have no other options, be sure to use new containers and give each fish their own, and discard them when you’re done. There’s always the chance your aquarium is harboring a zoonotic disease and you don’t want to share it.

How To Improve Your Fish’s Experience During Transport

Moving is stressful for fish no matter how careful you are, so what are some ways you can make things easier for your aquatic buddies while you transport them home?

How To Transport Bags Of Fish

The best way to transport a bag of fish in your vehicle is in an insulated container, like a small ice chest (without any ice, of course):

Inside a bag or sealed container, the only water movement comes from the shaking of transport, so it may take time for the O2 to dissolve from the air into the water. Placing the bag sideways increases the surface area of the water, which allows more O2 to be absorbed. This could be helpful for longer trips.

I always ensure the corners of the transport bags are taped up, so a fish can’t accidentally be trapped if the bag shifts. I lost a fish once to just such an accident during transport, so I always take extra precautions to prevent a recurrence.

How To Transfer Fish From The Bag To Aquarium

My method for moving fish from their transport container to their new aquarium is a bit different from what most online guides recommend. There’s a few things I learned about acclimating fish to a new tank from working in an aquarium shop, and I’m going to share these insider secrets with you!

Why Do We Acclimate Fish To A New Tank?

First, why do we acclimate fish at all instead of just dumping them straight into the new tank? Stores say it’s to allow your fish time to adjust to the different water temperatures. Otherwise, the temperature change might shock your fish. This is true but, it also misses a bigger point.

Water temperature is only one parameter out of many your fish will have to adjust to when changing homes; they may also have to get used to a different water pH and level of hardness. Floating a sealed bag of fish in your tank to acclimate them to the temperature won’t help them adjust to the other differences.

Ideal Way To Acclimate A Bag Of Fish

Instead, I float the bag for 20 minutes and then add some of my aquarium water to it. Then I wait and add a bit more. After several rounds of this over an hour, I carefully use a fish net to catch the fish in the bag and transfer them to my tank. This gives your fish time to adjust to the new parameters gradually, and is much less stressful.

There’s another benefit to this method. I don’t add any water from the bag back into the larger tank and instead discard it. This helps prevent the introduction of diseases and parasites to my aquarium. Sure, my new fish could carry them as well, but it’s definitely reduced outbreaks of Ich and infections in my populations.

Acclimating Fish To A New Tank: Step By Step

It usually takes about an hour to acclimate a bag of fish from start to release using this slower, more gradual method. You’ll also need a clip or some way to prevent the bag from slipping into your tank during the acclimation process once it’s been opened:

While fish packaged properly in a bag filled with oxygen can survive for up to two days, they become increasingly stressed as waste builds up in their water, so you should transport and acclimate your new pets as soon as possible. We’d love to hear your thoughts about transporting fish, so drop a comment below or join our aquatic community on social media!

1 thought on “How Long Can Fish Live In A Bag?”