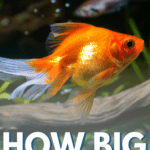 How big do goldfish get? Well, according to the Guinness Book of World Records, the longest pet goldfish recorded to date came from the Netherlands and measured a whopping 18.7 inches in length! Although that size is unusually large, goldfish do grow pretty big if they’re kept in the correct environment and fed a balanced, high-quality diet.

So, how fast do goldfish grow? That depends on a number of factors, and if you want to find out how to grow a really large goldfish in record-breaking time, then you need to read this fascinating article!

The Biggest Goldfish In The World

The world’s largest goldfish that was actually weighed came from the U.K. and weighed in at over two pounds! Goldie, as the fish was imaginatively named by his owner, lived for 15 years and grew to be five inches tall and just under 15.5 inches in length. Despite being kept in a small tank, Goldie’s impressive size can be attributed in part to the excellent care and diet provided for him by his doting owner.

In Holland, another pet goldfish made it into the Guinness Book of World Records, measuring an amazing 18.7 inches in length. Although the fish was never put on the scales, its weight was estimated at around three pounds.

Why Do They Get So Big?

In the case of these two record-breaking fish, it seems most likely that their impressive size was partly down to the care they received as pets.

Water quality is also extremely influential when it comes to goldfish growth. If water quality is poor, the fishes’ growth will be stunted, and they may even develop physical deformities as a result. Also, a nutritious diet and ample food will be influential.

Average Weight Of A Goldfish

The weight of a goldfish depends on the variety of goldfish and its age. However, on average, a regular pet goldfish weighs around eight ounces. When it comes to length, fancy goldies with their characteristic egg-shaped bodies generally grow to around eight inches in length, while single-tail goldfish can reach between ten and 12 inches long.

So, you can see that the world record-breaking fish of the U.K. and the Netherlands were exceptional specimens, rather than the norm.

Goldfish grow around one inch per year, growing most rapidly during their first few months of life. Unlike most other common pets, goldies keep growing throughout their lives. Goldfish don’t grow in spurts, depending on their environment and other factors. For example, a goldfish that lives in an outdoor pond will grow more during the spring and summer when the water is warmer, growing less during the winter months when the temperature drops.

How Big Can Goldfish Get In The Wild vs. In A Tank?

Modern goldfish are generally thought to be descended from wild Prussian carp and Crucian carp that originally came from Central Asia, although these fish are now found in Europe, Asia, and North America. Goldfish belong to the Cyprinidae family of fishes, together with common carp and minnows.

Prussian carp grow to an average of 18 inches in length, weighing around 6.6 pounds. The species’ usual color is silver, but they are found in other morphs, including orange and gold, which leads to them being mistaken for pet goldfish that have been released into the wild, having outgrown their tanks.

Strictly speaking, there are no wild goldfish. If you ever see a fantail or a comet swimming around in your local lake, it’s a pet fish that’s been released into the wild.

So, if your pet gets too big for his tank, should you turn him loose in your local pond or river?

Absolutely not! Firstly, goldfish are regarded as an invasive, alien species that could have a negative impact on the ecosystem into which they are released. Secondly, it’s unlikely that a pet goldfish would survive for long in the wild, as it would most likely fall prey to larger predatory fish, such as pike or bass.

Koi carp are sometimes released into the wild and some escape from commercial breeding operations, finding their way into ponds and lakes, where they can be mistaken for goldfish. Koi carp can grow to between 24 and 36 inches long, although some “jumbo” varieties are capable of reaching a jaw-dropping 52 inches in length.

Why Do Wild “Goldfish” Grow So Big?

These wild goldfish relatives can achieve their immense size for a number of reasons. Primarily, the water in which the fish live is typically cleaner than that of the closed environment of a home aquarium. Also, the water is very well-oxygenated and is topped up regularly with rainwater.

If the habitat has a good food supply, there’s no limit to how much the fish can eat. Once the fish have reached their adult size, there are few natural predators to bother them. Finally, the space available to the fish is much greater than they would ordinarily enjoy in a home fish tank.

What About Goldfish In A Tank?

There is some truth in the urban myth that the size to which pet goldfish grow is directly related to the size of their tank. Generally, pet goldfish grow to just a couple of inches long if they are kept in a bowl or small tank, and they don’t enjoy the natural growth spurts of their wild relatives.

There are several reasons for stunted growth:

So, with proper care and the correct size and aquarium setup, there’s no reason why your little baby pet goldfish can’t reach his full 12-inch potential.

How To Make Goldfish Grow Fast

The best way to help your pet achieve his maximum growth potential is simply by giving him the proper care and diet.

Although the basis of your fishes’ diet should be a high-quality goldfish food in either flake or pellet form, goldfish need a varied and properly balanced diet if they are to achieve their full size and lifespan of up to 20 years.

A high-protein diet is important to stimulate growth, especially in juvenile goldfish. Good sources of protein include frozen or live bloodworms, brine shrimp, and daphnia. You can also buy gel foods that contain added vitamins, as well as sources of protein.

Goldfish are omnivorous, so you should include some veggies in their diet. Blanched zucchini and shelled fresh peas are usually well-received and are also useful for preventing constipation, which is a condition that frequently afflicts goldfish that are fed a diet containing mostly dry foods.

Ideally, you should feed your goldfish twice or three times each day, offering them just enough food that the fish will eat in a minute or two.

The poor goldfish all too often lives his life in a small bowl or tiny tank, neither of which is suitable for this species. If your pet is to grow to his full size and enjoy a long and happy life, you need to provide your fish with at least a 30-gallon tank. Add an additional 10 gallons per extra fish. That means you will need a tank of at least 50 gallons if you want to keep a group of three goldfish.

Water temperature can affect the rate at which many fish species grow, including goldfish. For adult goldfish, the ideal temperature range is between 71o to 75o Fahrenheit.

Although goldfish can survive in temperatures as low as 65o Fahrenheit, cooler water causes the fishes’ metabolism to slow down, effectively slowing their growth rate too. So, if you keep your goldfish’ tank in a warm room, his metabolism will run faster, he will use more oxygen and eat more food, and all of these things lead to a faster growth rate.

When it comes to your goldfish’s genetics, you are taking potluck! Buying a feeder goldfish from a pet store or even a specialist fish store doesn’t guarantee that you will finish up with a super-sized pet.

If you buy a goldfish from a breeder or enthusiast, you can find out more about the genetic makeup of your fish, and that may give you a clearer idea of how big you can reasonably expect your pet to get.

Unfortunately, these critters are extremely dirty fish, so you must have an efficient filtration system in place in your tank to keep the water clean and free from harmful toxins. Goldfish are intolerant of ammonia, nitrites, and nitrates in the water, so you must test the water every week to make sure that levels are within acceptable parameters.

Carry out a partial water change of 25% to 30% every week, and use a gravel vacuum to remove solid waste and other detritus from the substrate. Check filter sponges and cartridges to ensure that they are not clogged, and make sure that the impeller is clean and able to move freely.

If you want your pet goldfish to grow to his full-grown size, you’ll need to provide him with a large enough tank, excellent filtration, and a balanced, nutritious diet. Also, keeping the temperature around 75o will help to boost your fish’s growth rate.

2 thoughts on “How Big Do Goldfish Get? Growth Rate For Different Types”