One challenge you’ll face when designing your aquatic community is figuring out what fish can live together in the tank without causing problems. This isn’t always straightforward or obvious. While you should definitely research your species of interest, it’s easier to start building your list by consulting a fish compatibility chart. Skip to our compatibility charts.

What Are Compatibility Charts?

A compatibility chart is simply a table with a list of fish, invertebrates, or plants on both axes or sides of the chart. Each animal or plant is then ranked against each other in terms of compatibility, or whether they can coexist in the same closed habitat. The method of ranking varies but usually includes Compatible, Incompatible, and Maybe.

How To Use Compatibility Charts

These charts are very useful when planning your freshwater, brackish or marine reef communities because they can quickly help you build a list of possibilities. You’ll still need to research each species, however, especially if you’re interested in including a lot that are rated as Maybe or Marginal cohabitors.

While the specifics vary depending on the chart you’re referring to, in general. Compatible fish are safe to keep together under most conditions, while Incompatible rarely works out when housed together. Marginal species may be ok in some situations and a disaster in others.

There’s more than one factor that has to be considered when building a compatibility chart, and that’s the reason you’ll need to follow-up with deeper research instead of relying entirely on a chart for your final purchase decisions. The charts give you a rough idea of what could work if the conditions in your tank allow for it.

The weight given to each factor also varies by aquarist and by the species being compared. In the end, your aquarium conditions and set-up will be the determining factor in whether a group of fish get along or not. The most reliable charts are constructed by considering the following factors:

The temperament of each species is probably the most important factor in whether they will get along in your aquarium. Aquatic organisms are usually rated as peaceful, semi-aggressive or aggressive and their compatibility is segregated along these lines. Some fish are also territorial and will defend an area of your tank from others.

You should take the temperament of your fish seriously. While some semi-aggressive species, such as the Tiger Barb, can live in a peaceful community for a while this is usually a temporary condition. Things will be fine until you wake up one morning and find your barbs fighting with each other and your other fish. 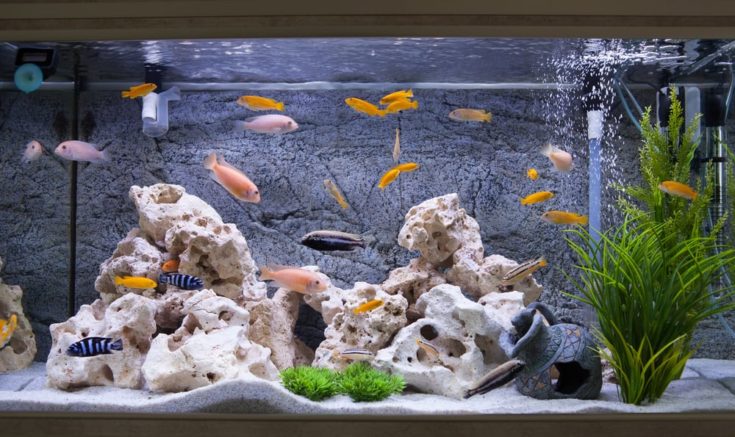 One thing to note when you’re looking at a chart is how focused the list is. A chart that lists “cichlids” or “barbs” as Incompatible may be ignoring the few peaceful breeds among them, such as the Cherry Barb and Dwarf Cichlid. You may need to consult a barb or cichlid aggression chart for deeper detail on their compatibility.

It’s always a good idea to balance the activity levels of the fish you select for your community and be sure they don’t conflict. Activity level usually takes into account how fast a fish swims and whether they prefer to hide or school together in a group. Active fish can bother or stress less-active or territorial fish with their antics.

Fish are usually categorized as coldwater or tropical species depending on their preferred temperature range. In general, it’s not recommended that you keep cold and tropical species together and most charts list them as Incompatible.

Keeping fish or invertebrates in water too warm or cold for them can cause stress and illness and usually leads to death. But some technically incompatible species have overlapping temperature preferences, and as long as they are not incompatible in other ways you may be able to manage them in a tank together. 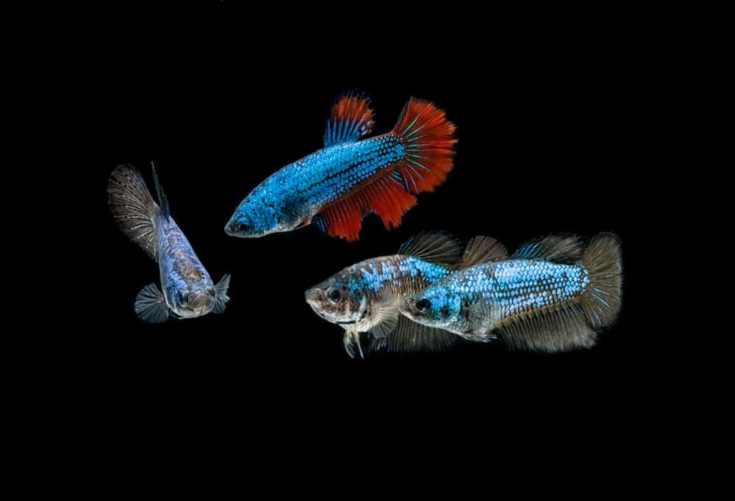 Size can factor into compatibility in many ways, and it really depends on the species being considered. Some species are best kept with others of the same size because they get aggressive with those larger or smaller than they are. Others target species in their size-range but leave smaller or bigger fish alone.

The gender of your fish is not usually a factor in their overall compatibility but it depends on the species. In some cases, most notably the Betta, one gender may be aggressive or territorial while the other is less so or entirely peaceful. They may rank differently in terms of compatibility, which you’ll have to take under consideration.

Diet is not usually a big factor in compatibility as long as each species is provided with the range of nutrients they need. Aquarists often provide a mix of commercial and fresh/frozen diets to their community aquariums. But some species have a very limited range and are harder to keep in mixed tanks, like the Bamboo shrimp.

Compatible species should have overlapping requirements in terms of their water pH and carbonate hardness. Obviously, a species that prefers very hard water is not likely to thrive in a soft-water aquarium, even if the mix of fish would be compatible in terms of temperament and activity level. 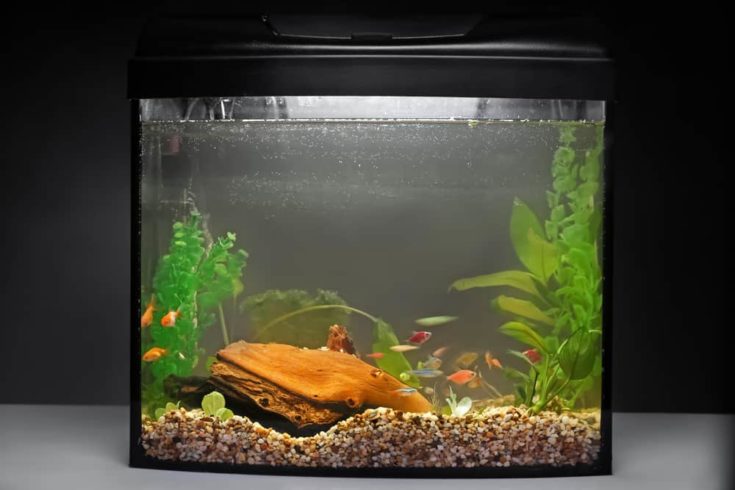 This is often a big factor in designing marine compatibility charts but usually less of a consideration in freshwater tanks. Corals and saltwater fish can have dramatically different preferences for hardness and pH, but the majority of freshwater species have a wide enough range that it is less of a limitation.

Aggression between community members is the most common problem we see in our community tanks, and it can be incredibly frustrating. Even sticking with species rated as Compatible is no guarantee you won’t have problems, and if you mix a lot of Marginal fish together the chances are good that you will.

Besides checking compatibility charts and researching your fish, what can you do to reduce the chances of aggression in your community?

Here are my tips:

Provide Each Fish With Plenty of Space

The general rule is to allow for approximately one inch of fish per gallon of water in the tank, but more room is always better. Use the size of the adult fish when calculating your capacity and not the size at the time of purchase. Otherwise, they could outgrow your tank as they mature.

Take their recommended tank size into consideration as well. If your species needs at least a 20-gallon set-up then a 20-gallon community aquarium is probably not big enough for them long term. 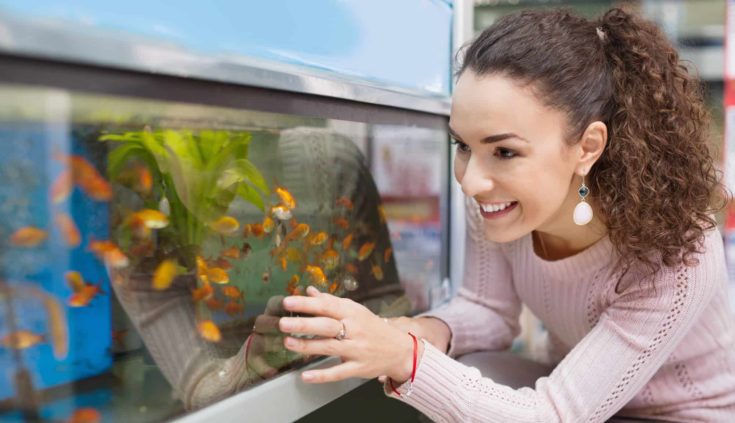 Create Different Zones In Your Tank

Use plants and decor to break your tank into different areas to suit the activity level and territorial nature of your community. Provide your active schooling fish with room to swim and give your shy bottom feeders plenty of hiding places.

It can be easier to manage aggression when each species has a distinct area of the tank they like to hang out in. Get a mix of bottom dwellers, mid-level explorers, upper-level schoolers and fish that use the entire tank. Don’t add too many territorial fish unless you have room for them to maintain separate areas.

Take Caution When Adding Fish To An Existing Community

Be aware that adding new fish to the mix could completely upend a Marginal situation or create conflict when there are members of the same species that are different sizes. For instance, the Tiger barbs in my 55-gallon community tank were fine for years until I added a few new, smaller barbs to the group.

That changed the dynamic just enough that they all started to beat up on the rest of the community. Despite my efforts to restore harmony, I ended up having to start a tank just for the barbs. Even peaceful fish can have conflicts over territory, food and incompatible activity levels. 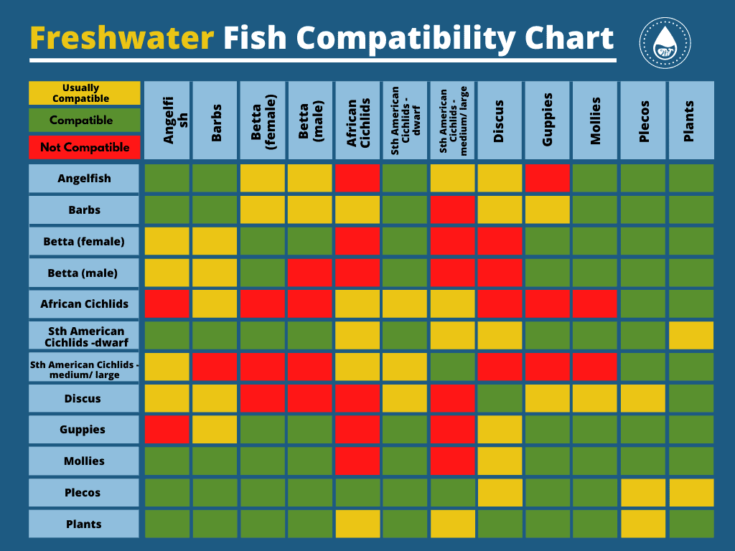 Our freshwater compatibility chart covers the most popular groups of aquarium fish and invertebrates, though we recommend you do further research before making your final selections. 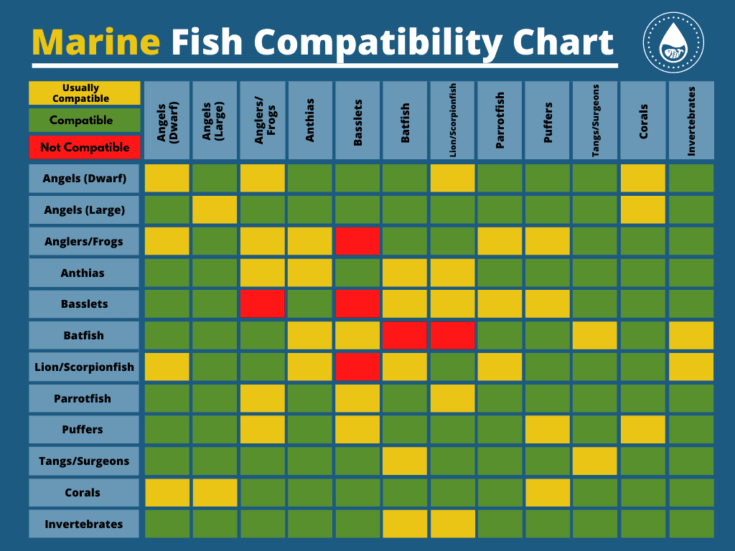 Our marine compatibility chart covers the most popular saltwater fish, invertebrates and coral/live rocks, though we recommend you do further research before making your final selections.

Compatibility charts for fresh, brackish and saltwater aquatic species can be very helpful when you’re planning a community aquarium. You can use them as a guide while you’re making an initial list for a new tank under design or for making adjustments to an existing community.

They can quickly help you create a list of possible options, but you’ll still have to do further research to be sure the fish under consideration will thrive in the unique conditions of your tank. I hope you’ve enjoyed learning about fish compatibility and I’d love to read your comments and feedback here or on our social media pages!

Check out our infographic and don’t forget to share!

2 thoughts on “Fish Compatibility Chart for Freshwater And Saltwater Pets”