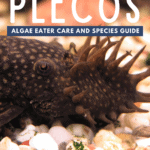 Are you looking for a hardy, easy to care for freshwater fish that also doubles as part of the aquarium’s clean-up crew? Then check out my all-time favorite bottom dwelling-catfish, the Bristlenose Plecostomus! They look fierce, with their bushy tentacles and armored body plates, but they’re an ideal algae eater for peaceful community tanks!

Nocturnal and active at night

Peaceful, mellow, shy; male fish are territorial and may fight with each other if there’s not enough room in the tank

25-30 gallons per male; allow an additional 10-gallons per female for a group

Egglayer; male protects and cares for the eggs until they hatch

Ideal for planted tanks but will snack on them, so provide a mix of fast-growing treats like hornwort and slower-growers like Amazon Sword

Introduction to the Bushynose Pleco

If you’re looking for a fish that’s friendly, functional and looks really weird, then you should consider the Bristlenose Plecostomus! One of the most popular algae eaters in the trade, these suckermouth catfish are also known as the Bushy Nose or Brushmouth Pleco for the tentacles sprouting from their heads.

Bristlenose catfish have earned their popularity for several reasons:

How many types of bushynose are there, and does it matter which species you end up buying? This is where things can get a bit confusing, since stores sell them under a variety of names. There’s actually more than 70 unique species of wild “bristlenose” catfish, and the list keeps growing:

The good news is it doesn’t really matter which type of bushynose you buy. There’s little danger that you’ll accidentally end up with an aggressive mimic, as in the case with the Spotted Raphael catfish or Rubber Lip pleco. Bristlenose catfish are all peaceful species, with similar dietary and care requirements in your tank.

Species of bristlenose are found in shallow, fast-moving rivers and streams across an incredibly broad range of tropical South America. They live along the bottom of the waterways, hiding in piles of wood as they feed on biofilm, algae, vegetation and the occasional fish egg or insect treat.

Bristle’s were originally discovered in the Amazon and Orinoco Basins, but we’ve since found many related species widely distributed within a 270 million hectare region known as the Guiana Shield. Populations may be found in parts of Brazil, Columbia, Venezuela, Panama, Guyana, Suriname and French Guiana.

While there are at least 76 distinct species of bristlenose, many of these populations have overlapping ranges:

Bristlenose catfish average between 3 and 5 inches in length at maturity, and rarely grow longer than 6-inches. This makes them ideal for smaller and mid-sized aquariums, unlike the larger, unrelated Common Pleco (Hypostomus plecostomus), which may exceed 2-feet in length!

As members of the Loricariidae or armored catfish family, they don’t have scales but are instead covered in thick, boney plates. They have a spiny dorsal fin that usually lies flat along their backs, but stands upright when they are alert. Their strong pectoral and abdominal fins help them navigate along the bottom of the tank:

Bushynose catfish are available in a wide variety of colors and patterns. Common bristlenose are usually a mix of black, brown, grey or olive base colors with paler white or orange/yellow patches or spots. These patterns help camouflage fish in the wild, and change as they mature. Rarer varieties and morphs include:

It’s very easy to spot the differences between male and female fish once they’ve reached maturity around their first birthday. Male fish grow faster than females and are usually noticeably larger by 6 months of age. Their tentacle development is the key way to spot male vs female bristlenose catfish, however:

These catfish usually survive in aquariums for about 12 years on average. With diligent care, you can expect to have your bristlenose pleco for at least a decade!

Bushynose plecos are mostly nocturnal and spend the daylight hours hiding in driftwood caves and feeding on biofilm. They are peaceful community species, and unlike many plecos, they won’t hunt and eat your smaller fish! But they are catfish and may opportunistically snack on smaller invertebrates or fry.

Males establish and defend a territory against other male catfish, so it’s best to avoid keeping multiple males together unless you have a long aquarium with plenty of room. You can keep a single catfish or a mixed-gender group in your community tank.

How to Care for Your Bristlenose Catfish

It’s not hard to set up the ideal habitat for these funny-looking but friendly catfish! Let’s take a look at the care requirements for the bristlenose pleco:

What kind of aquarium set-up do these tentacled plecos need to thrive?

These small plecos do well in tanks 25-gallons and up. As bottom dwellers, bristlenose prefer horizontally-oriented tanks rather than tall or portrait-style aquariums. If you’re buying a standard size aquarium, consider getting a long breeder tank for your pleco community.

It’s best to use a soft substrate in a bristlenose tank, rather than sharp or harsh gravels. Using aquarium sand, soil or fine gravel prevents injury to your fish’s abdomen or fins. For breeding set-ups and single-species tanks, you can skip using substrate entirely if you want to make your maintenance really easy, but you may have to skip having live plants (or keep them in pots).

Bristlenose catfish are hardy and tolerate a wide range of temperatures. They prefer water from 60 to 80°F, so you may not need a heater for your tank, and a pH range from 6.5 to 7.5. They are not especially sensitive to your water hardness and do best at 6 to 10 KH.

Bristlenose catfish prefer well filtered and very clean water with a moderate to high rate of flow along the bottom of their tank. Canister filters are ideal for pleco tanks, but HOB filters may suffice in smaller aquariums. They are nocturnal fish and prefer low light or heavily shaded areas of your tank during the day.

If you’re using a robust filtration system you may not need an airstone for your pleco tank, but it can’t hurt to use one, either. Some bristlenose can store oxygen in their stomachs for up to a day, and may be able to survive low-oxygen conditions, but other fish may suffer when exposed to hypoxic zones in your tank.

Bristlenose catfish prefer tanks with a lot of live plants, and they actively feed on the biofilm and algae that grow in mature aquariums:

Brushmouth catfish are easy to care for, but with their vigorous appetites, they also produce a lot of waste. Be sure to change your aquarium’s water on a regular basis and replace the filter media as needed to keep your water quality high. Poor water quality leads to stress and can make your fish sick.

What do Bristlenose Plecos Eat?

Bristlenose catfish are scavenging omnivores and will enthusiastically consume both plant and animal foods. But unlike most species of catfish, they don’t thrive on a high protein diet, which can lead to bloating and other health problems. They do best when fed about 90 to 95% vegetable matter with the occasional protein treat:

Bristlenose are known to feed on bogwood and aquarium biofilm, as well as algae and live plants, but aquariums can’t provide them with a naturally balanced diet. It can take up to 6 months for a tank to mature and produce biofilm, so you should always supplement your pleco’s diet with commercial foods and treats:

You can keep a group of bristlenose in a single species or breeding tank, but these shy fish are also a great option for community aquariums! They are compatible with other peaceful species and often do well with the smaller semi-aggressive fish like Tiger Barbs. Some fun options for tank mates include (but are not limited to):

Bristlenose catfish are easy to breed as long as you have a mix of genders in your tank, and they’ve been known to produce viable eggs even in community aquariums. In that case, you’d probably have to transfer the eggs to a breeding tank if you wanted to raise fry, since the community would eat ‘em.

Here’s a brief overview of the spawning process; for more information and detailed instructions, check out this translated article by a respected German authority:

Bristlenose catfish are usually very healthy fish, but they’re susceptible to any bacterial, viral and fungal diseases carried in your water. It’s important to quarantine new fish and live plants before introducing them into your community to prevent the spread of aquatic diseases.

What do you need to start a single-species tank for bristlenose catfish? It depends on whether you also plan to raise fry, since you’ll need another basic set-up for the babies once they hatch. Here’s a complete list for a breeding tank with 4 fish (1 male and 3 females):

As you can see, there’s a ton of reasons to consider adding a bristlenose catfish to your planted freshwater community. Have you had bristlenose plecos before, or raised their fry? We’d love to hear about your experiences in the comments below, or come dive into our community of fish lovers online!

You can also see our article about Sailfin Pleco (Pterygoplichthys Gibbiceps) – Care Guide!