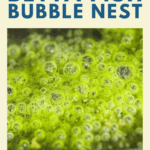 Lots of people love to keep betta fish at home due to their beautiful colors and, in the right environment, their activity.

The common misconception is that betta fish are very low maintenance. Fortunately, they are definitely not the most difficult species to maintain, but you’ll find that there are certain environmental factors that need to be maintained in order to have a happy, healthy betta. One way to tell that your male betta fish is happy is that he will make a betta fish bubble nest.

What is a Bubble Nest?

Several species of fish, as well as some eels and frogs, make bubble nests, which are exactly what they sound like. They blow bubbles that are brought together to form a nest. These nests are often located beneath debris or plants in the natural environment, where they can butt up against something that floats on the surface, as they need to be oxygenated by the air at the surface. These bubble nests are part of a natural process of reproduction and are typically made by the male of the species, though on rare occasions, females make them as well.

In a home environment, a male betta fish may or may not make a bubble nest, depending on a number of factors. If he does, you may not see it, if you have floating plants or ‘debris’, as he will usually locate his nest under these. If there isn’t something like this in the tank, he may build his bubble nest in the corner of the tank. You may be asking, “do female betta fish make a bubble nest?” and the answer to that is very rare. It’s almost always the male.

How is a Bubble Nest Made?

There’s nothing particularly complex about the way a bubble nest is constructed. The fish that make them literally blow bubbles, and with some, such as Siamese fighting fish, also known as Betta splendens, they actually do this in a very frantic way that makes a great deal of noise. The bubbles are placed at the surface of the water in the environment, whether in the wild or the tank, and they are bonded together to hold oxygen. With bettas, the bubbles are coated with saliva to keep them stronger and more durable over time. Other species also have saliva or other excretions that help protect the integrity of the bubble nest as well. 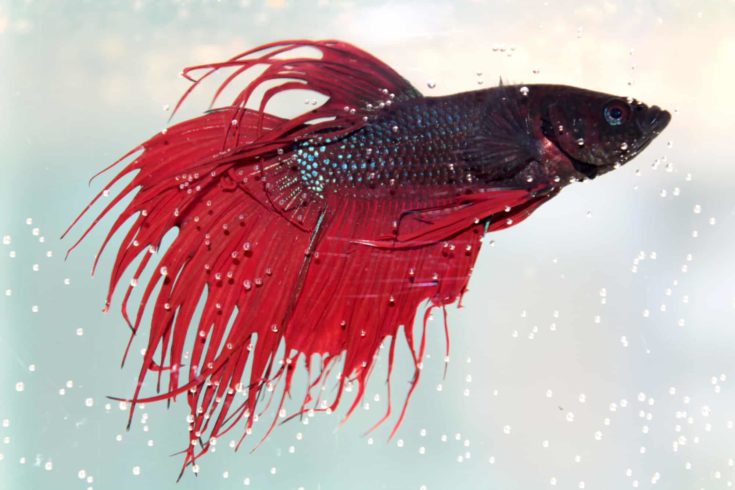 Fish that make bubble nests, also known as foam nests, are called aphrophilus. The majority of these species live in shallow, muddy puddles with stagnant or slow-moving water that is both dirty and has low oxygen levels. This helps protect them from larger predators that need deeper water to flourish, so they have adapted to these acidic environments. Bubble nests are one of these adaptations for survival.

Because these areas of water are poor breeding grounds, unable to support eggs and fry, male members of these species – who typically are solely responsible for the care and protection of offspring without female assistance – create bubble nests to support reproduction. Think of the bubble nest as a sort of cocoon, in which a caterpillar metamorphosizes into a butterfly. Just as this is to protect the caterpillar while it’s in its most vulnerable state, the bubble nest allows the eggs and newly hatched fry a safe environment that the male parent can protect as well as supply oxygen with which to grow and thrive.

In rare cases, the female, too, will stay to protect the nest, but this is only in a few species of aphrophilus. With betta fish, you’ll only see the male betta caring for the eggs and newly hatched young. 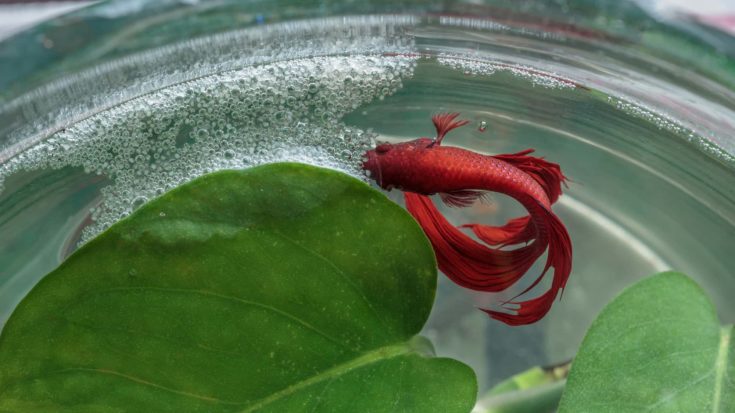 A bubble nest is as unique as the fish that creates it, and the look and dimensions vary greatly. Because larger species can support more offspring, they often produce larger bubble nests. However, this isn’t the case, and depending on several traits and factors, the same fish may not always build the same size bubble nest.

Some nests are made of very small bubbles and look more like foam, while others have distinct bubble shapes in them. You might even find it up to an inch thick. Others are thin. Some are spread out, while others are small and condensed. Age of the fish may contribute to the size of the bubble nest as well, not to mention the presence of other fish of the species in the same environment.

How Breeding Works with Bubble Nests

Breeding for betta fish and other bubble nest wielding species puts a lot of demand and responsibility on the male and very little on the female. In fact, all she has to do is spawn the eggs. The decision to do so may have something to do with instinctually feeling that the bubble nest created by a particular male is acceptable. 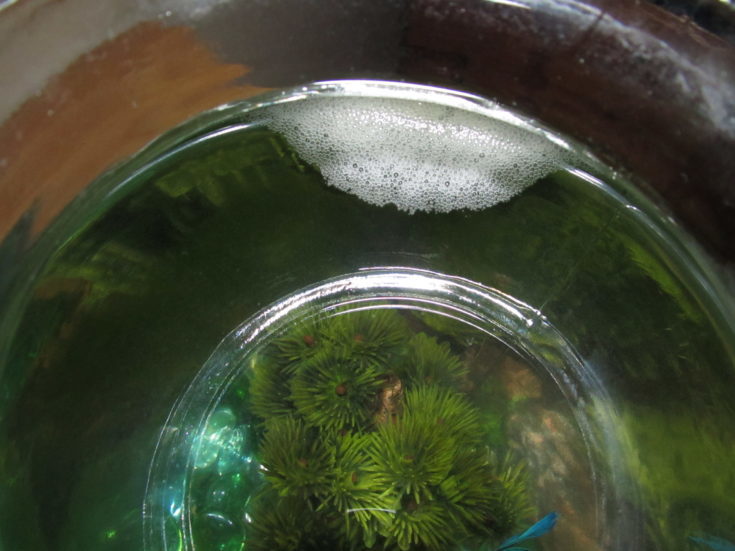 Most of the fish that use these foam nests don’t need long for the fry to hatch – a few days at most – but for that time, the male parent guards the nest. That means that should an egg fall out of it, he collects it and carries it back. He wards off all potential threats, including the predatory females who often eat the eggs before they can hatch if given the chance.

Even after the young have hatched, they can’t survive on their own immediately, and they remain in the bubble nest under the watchful eye of the male parent until they are able to survive on their own. With the birthing process happening within a few days, it stands to reason that the young would leave the nest within a few more, perhaps a week or two at most, for most of these species. Depending on the season, the age of the male, and some other factors, he may immediately begin to construct a new nest, or he may not.

While bettas in tanks don’t exactly have the stimulation of breeding season, the males often instinctually build bubble nests, so you’ll often still find this to be the case with your betta fish. Don’t worry if he doesn’t practice this behavior, though. Not all bettas do, and while the bubble nest is a sign that your fish is happy and healthy, it’s certainly not a sign otherwise that he isn’t happy.

Not all aphrophilus will build bubble nests all the time. In fact, there are a number of factors that come into play regarding the potential for building them, as well as the frequency with which they are built. In all cases, breeding season tends to cause greater production levels, but that’s definitely not the only thing sparking action. 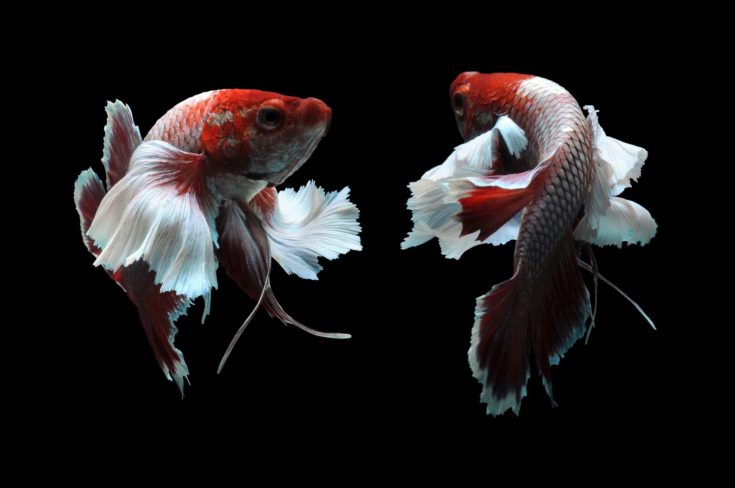 Betta fish, in particular, are susceptible to the presence of female fish who could be potential partners in the area. All a female has to do is swim by, and it can quickly prompt a male betta to start constructing a bubble nest. In the same vein, if there are several male ‘competitors’ in the area vying for a chance to procreate, the male may be more likely to build his nest.

Water temperature has a lot to do with the work as well. Warmer temperatures promote breeding, and so those same warm temperatures create the flurry of activity in building the foam nests to support the production of the breeding. Having enough space to find a preferred location can also make a betta more prone to building a bubble nest. Several of these factors also weigh in on whether or not your fish is going to build a nest.

For example, you need to keep the tank between 78 and 82 degrees for the health and happiness of your betta. If you do, you might start to see a greater interest in building nests. Of course, if you don’t see this, it may not be anything you’re doing wrong. Perhaps there just isn’t anything stimulating the instinct for the fish, or maybe he’s not at the right age to be spawning.

There’s also the possibility that you just don’t see the results of your fish’s work because it’s butted up under something floating, which is where they prefer their nests to be. It can be difficult to spot them at times, so you shouldn’t worry if you aren’t seeing the production of bubble nests in your tank unless your betta starts acting oddly. 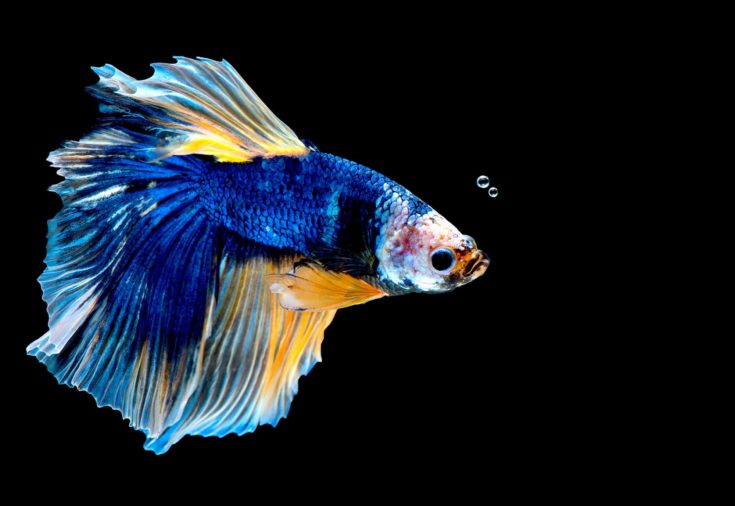 As with size and everything else, the frequency is as unique as the fish. Some male bettas and other species will build bubble nests daily. Others might have a weekly or monthly cycle. Some are sporadic, while others simply don’t make them at all without some form of outside stimulation. It’s also possible for a male betta to change his pattern over time, so that he may go from building monthly to creating bubble nests daily and then taper off to almost never doing the work. And again, don’t be alarmed if your male betta never creates a bubble nest. This isn’t uncommon either for bettas that are not in the wild.

Of course, while the lack of a bubble nest doesn’t particularly mean your male betta fish isn’t content, having one that builds bubble nests does attest to his happiness and health. There are quite a few ways you can help contribute to the creation of bubble nests through environmental factors if you really want to assure yourself of his contentment. 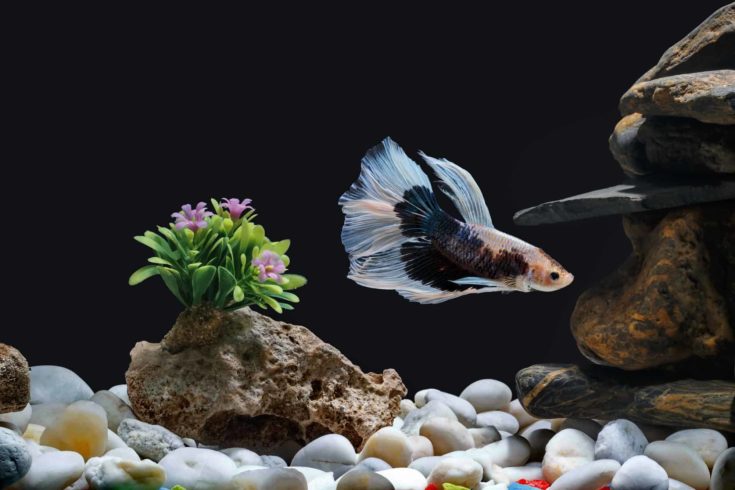 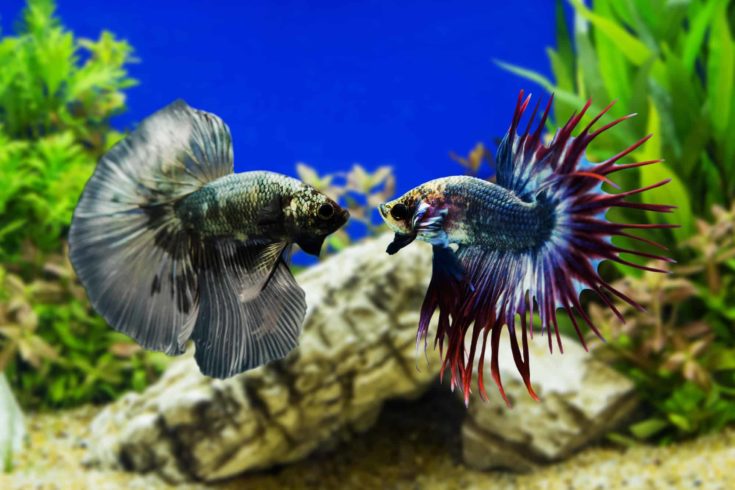 Remember, however, that even if everything is right here, and you’re feeding your betta appropriately, you may still never see your betta produce a bubble nest. It’s more likely they will at a certain mature age, but even this can’t be guaranteed. If your betta is overly lethargic or pale, you may want to consider that he’s sick. Otherwise, though it’s easier to confirm his health if he’s a productive builder, you can’t judge him as ill just because he chooses not to make bubble nests. 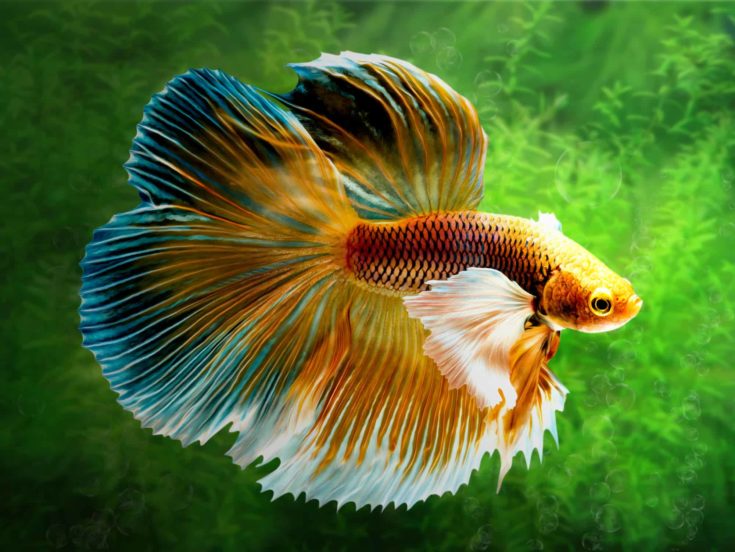 If your fish’s pattern changes, this also isn’t cause for alarm. While almost all aphrophilus males will blow bubble nests from time to time based on nothing more than a desire to do so based on instinct, that frequency can change over time without anything else seems to change in the environment.

Having a betta fish can be exciting if you know how to treat your fish, and it can be fun and awe-inspiring to watch the natural way in which the male creates a bubble nest. This common practice is about building an oxygen-rich environment to hatch fry from eggs, but that doesn’t mean a male has to mate in order to build one. It’s a natural instinct for several species, including bettas.

If you’re concerned that the environment isn’t fostering your fish’s desire to nest, make some changes. Most importantly, make sure the tank is large enough and warm enough. Secondly, keep the environment clean and stable, so your fish can move around as desired. Finally, give him a place to build as well as a decorated environment that keeps the tank from being bare and depressing. You can always introduce a female to prompt building, as long as you maintain a barrier between the male and female (unless you’re a breeder and you want the two of them to interact and procreate). Following the tips are given here, you’re far more likely to keep your betta healthy and content, even if you don’t see bubble nests. And if you do, that’s even better!