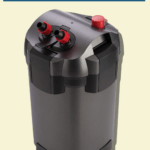 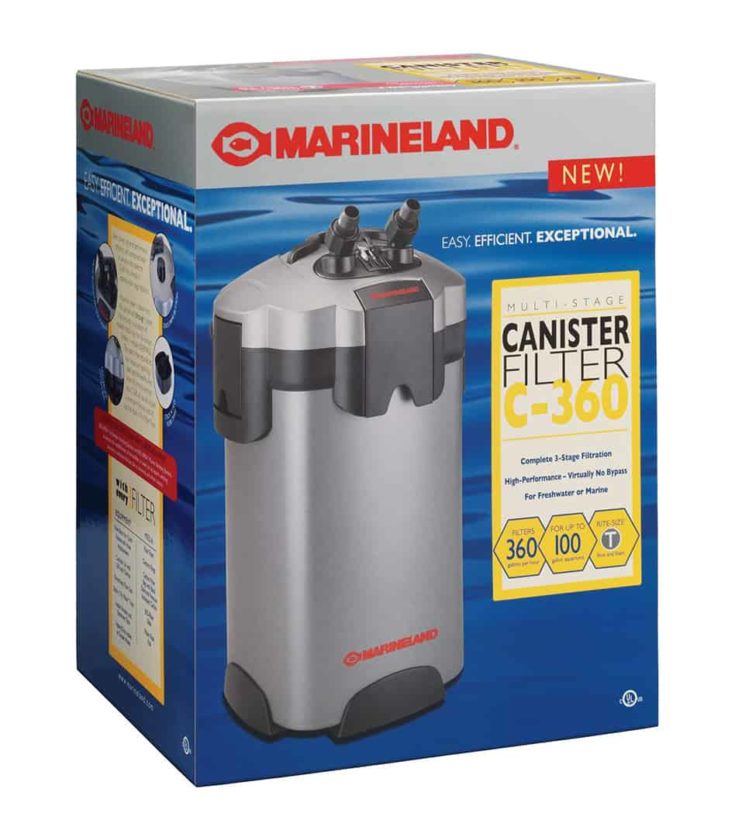 The filter includes four media trays and is compatible with a range of biological, mechanical, and chemical media. The c360 comes with vinyl tubing, which is quite good and very durable.

The market for canister filters is so vast nowadays that it’s easy to forget entirely about particular brands, even long-running ones like Marineland. They’ve been manufacturing aquarium equipment, including filters, since the 70s.

If you’ve been doing research about filters lately, you’ve probably seen their name thrown about, as I did. Wondering how their products have evolved, I decided it was time to do a Marineland c360 canister filter review.

A knock against many canister filters is that they allow for water to bypass the filtration media, defeating the entire point of filtration and leaving your tank water much less clean than it should be. Marineland claims a “revolutionary design” that forces water through the media trays, meaning no bypass, and much cleaner water that has been rigorously filtered.

Activated carbon, if you weren’t already aware, is a very popular filter media option that resembles small rocks of coal. It absorbs many potentially harmful chemicals from the water, including copper and chlorine. The BIO-filter balls are a Marineland product designed to provide increased surface area for biological filtration agents (i.e. bacteria that strain out unwanted material from your aquarium).

Things To Consider Before Buying A Filter

You’re no doubt hip to all of the amazing benefits that canister filters provide for larger tank owners. You’re aware of the increased flow rates, ability to use multiple filtration media, the advantages of external filtration, and that some filters come standard with additions like UV sterilizers and the like.

What you and many other tank owners may not have considered, though, is the ability of whatever filter you purchase to be customized. Filters are not static devices, as you may have assumed, and to maximize their performance, being able to change things about them, like media distribution, is crucial.

For instance, with some tweaking, some canister filters allow you to load in precise amounts of various media. Sure, you could add in even amounts of biological, chemical, and mechanical filters, but that may not work as well for your particular tank. Sometimes you may want to forego your biological media in one filter and go strictly chemical/mechanical to improve flow and distribute the water in a specific output location in your tank that is starting to stagnate.

If your filter has large fish on the other hand, that produce a lot of waste (which is rich in ammonia) you may need a greater amount of biological media to compensate for the high ammonia content, and mechanical media to filter away the solid fish waste.

It’s all dependent on your tank environment, so having the option of switching things up is something you should consider.

As stated, this is a big, heavy, sturdy filter. Chintzy is not an adjective that you’ll be using to describe any Marineland filter. The plastic is a thick, durable gray, and the shape of the c360, though a bit plain, is actually what lends to the no-bypass capabilities. Everything locks in place tightly, and the hoses are thick and substantial.

This all, of course, comes with the drawback of immense size when compared to other filters. The c360 is almost 18 inches tall and weighs nearly 20 pounds on its own. Even heavier when filled with water and filtration media. Hope you’re ready to get a workout trying to move this thing to the sink.

The media trays are probably the most spacious of all comparable models. 3.4 gallons is a lot of room, and you can mix-n-match as you see fit. The Marineland also includes a series of quick release features, easy access design for the filter trays, and additional seals to help prevent accidents.

It’s also easy to disassemble this unit (we’ll talk assembly later). There are a number of filters that require you to summon the strength of He-Man just to budge the locks out of place and take the thing apart, but the Marineland, while still having exceptionally tight locks, also makes those locks easier to disengage. Check out the components in this unboxing video.

It seems that Marineland has learned from the shortcomings of some other manufacturers in this regard. While the written instructions they’ve provided are still horrendous, they did go through the trouble of including a friendly DVD instructional for us. Helpful, though many of you may still want to head to YouTube to get your simplified tutorial.

With all that said, the setup process is rather intuitive, and dare I say easy if you’ve set up a canister filter before. Priming it is simple too, thanks to the quick prime button. It quickly fills the canister housing and eliminates the need for manual siphoning, cutting down on messes as well. Hopefully more and more filters will start incorporating this feature.

Since this model comes packaged with the media you’ll need, you can just unbox it and get to work. Don’t expect top of the line, however. Down the line you might want to consider investing in some new filtration media that are a bit more efficient.

Marineland was not joking around when they said “no-bypass”. The interlocking, sealed media trays actually force the water to move through the various filters. By providing the tank water no other path to take, Marineland ensures you get properly filtered water.

While the no-bypass system may be legit, the so-called quiet operation needs a bit of work. It’s not the loudest filter around, to be sure, but there is a distinct hum that you’ll pick up on that isn’t present with the most silent filters on the market.

I had heard a lot about leakage problems with this unit, and though didn’t experience any personally, decided to do some more investigating. It turns out that there was a production run that was defective, but those units have since been recalled and replaced, and the problem (which was with the motorhead, I believe) is resolved.

The included media, while sufficient, aren’t the best you can get. The Bio-Balls in particular were disappointing. You’ll want to experiment with different varieties to see what is going to work best with your tank. You have plenty of room to play around with different combinations, so be sure to go for it. Just don’t overfill. The latches won’t catch properly if you have your trays overstuffed.

When you do have the trays properly loaded, it doesn’t impede flow rates, and Marineland c360 pumps water at a respectable rate. It’s listed as having a max capacity of 100 gallons and a max rate of 360 gph. When in operation, it didn’t seem too far off from those numbers, which was impressive. See it in action below.​

Once you finally get this behemoth to the sink, cleanup isn’t too big an issue. You probably already know the drill when it comes to maintenance and cleaning. Take filter apart, clean with water (tank water to preserve your beneficial bacteria), make sure nothing is obstructed, then put the filter back together. It’s pretty much the same with the c360, however, you’ll have to take care not to damage or lose the gaskets that seal the trays together. You can find detailed maintenance steps by watching the video below..

On the plus side, if you do happen to lose anything while cleaning, Marineland is running a top-notch customer service operation, and you’ll be able to get replacement parts in no time.

Considering the filter’s power and voluminous storage capacity, you’re getting a good deal here at a reasonable price. There are more powerful filters out there, certainly, but if this is the price range that is suitable for you then the Marineland is going to be difficult to top in terms of overall value.

The Fluval 406 Pro is going to be on your radar if you’re looking for a filter with a comparable max capacity but slightly improved gph. The Fluval is equipped with extra features like a clog-proof strainer, and a sound-dampening impeller which they say makes for better-sustained use and quiet operation. You’ll be getting reduced filter volume with the Fluval though (only 2.25 liters), and the price is noticeably higher than the Marineland c360.

If you’re looking for something a bit less expensive, you could always try the reasonably priced Penn Plax Cascade 1200. It has a max capacity of 150 gallons and a 315 gph flow rate, but manages to pack it into a 15 pound package that’s only 11 inches tall. More compactness that will fit where you need it to.

The Penn Plax Cascade is easy to set up, includes push-button priming, and 360 degree rotational valve taps so you can place it just about anywhere. Flow rate is adjustable thanks to the incorporated shut off valves, and maintenance is simple since the Cascade breaks apart and comes back together with great ease.

If you want to stick with Marineland, but need something stronger, maybe the c530 is more to your liking? It has all the same great features as the c360, like the no bypass design, large media trays, three stage filtration, and ease of use, but in a bigger more powerful form that delivers 530 gph to tanks of up to 150 gallons. It’s even more of a space hog than the c360 though.

You’ll need about 24” of clearance to store this unit, so if your tank is sitting on a low table, it might not be your best option. Furthermore, it can reach up to 45 pounds fully stocked, so unless you’ve been lifting weights, or have a dolly on hand to haul this thing around you’re going to be in for a less than thrilling time trying to get it from point A to point B.

I’m hoping this Marineland canister filter c-360 review helped you along in your decision about which filter to go with. In my opinion, the Marineland is an exceptionally sturdy filter, and while it’s bigger and heavier than similar models, the fact that it has such great filter media capacity, along with pretty reasonable power compared to its price solidifies it as a good purchase.

If you’ve been out of the game for a while and are interested in seeing how Marineland has improved since the old days, check out this c360 canister filter review.