Sometimes having a tank with real fish is not in the cards. Maybe you travel for work or you live on the road. No matter the reason, this mason jar aquarium project is fun for the whole family and can make wonderful decorations for a window sill or ledge in the bathroom.

A DIY fake aquarium is the next best thing to actual fish and, in some ways, is even better. Once you have finished setting it all up, you will have a beautiful blue tank of sea friends that require no upkeep whatsoever.

What You Will Need

This fish tank doesn’t require the filters, chemicals, or any of the other things traditional aquariums do. But there are some things you will need to make this pretend aquarium a reality. 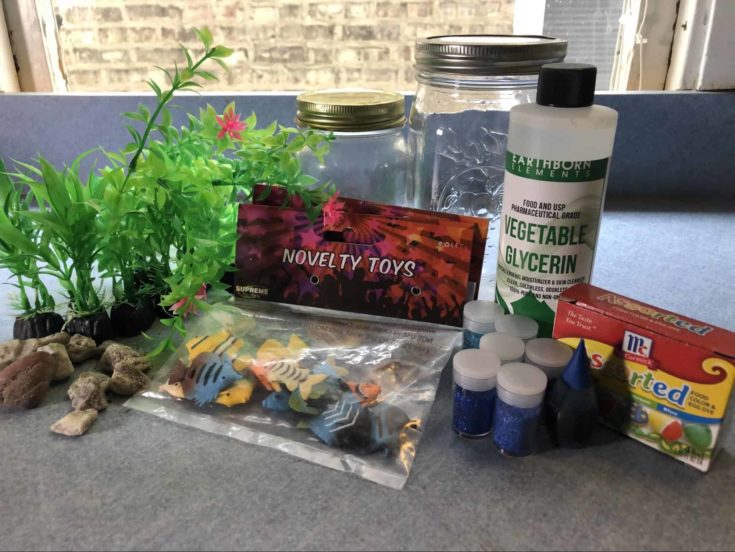 How To Make A Fake Aquarium

To create this interesting and unique craft all you need to do is do the following. 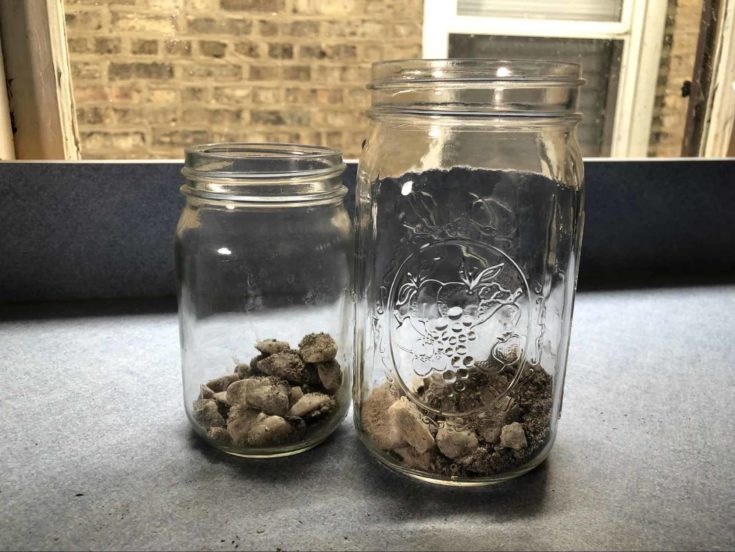 Put the pebbles in the jar. As I mentioned, I used rocks for gardening and that was a mistake because they are dusty and dirty, so when I put the water in, which is still a few steps away, it was filthy. So, I had to drain it all and rinse the rocks with a strainer.

I still found the rocks I used to be a problem so I will risk redundancy when saying be sure to get the type of pebbles needed for an aquarium. 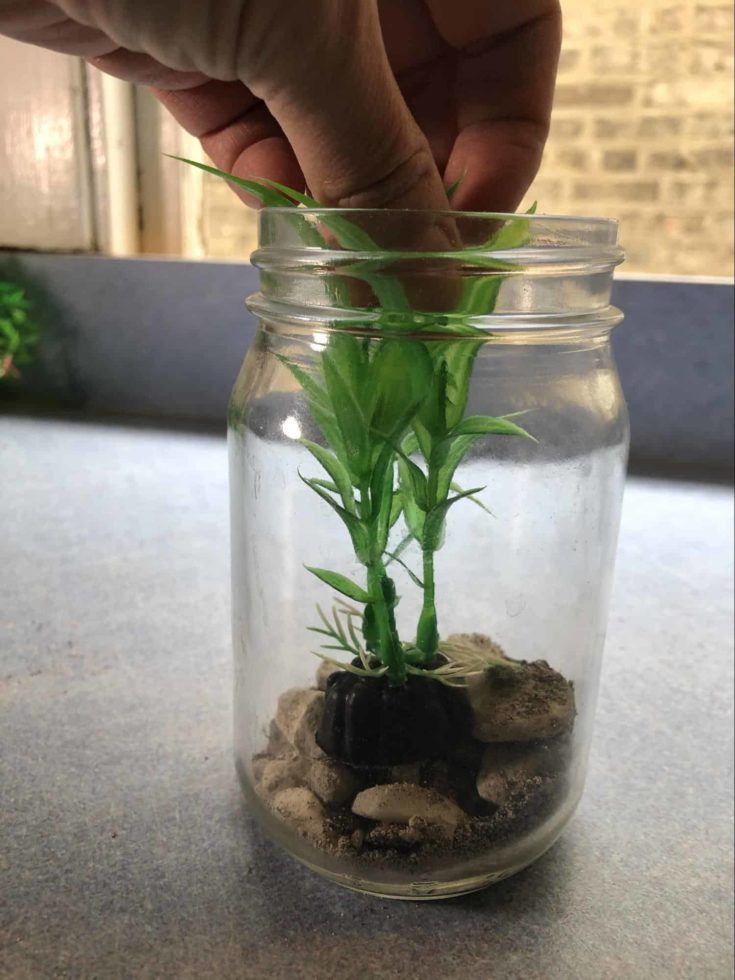 Now it’s time to place your plants in the jars.

I would recommend trying to secure them underneath the pebbles but all of your work doing so will be a futile effort, which you will see in a few minutes. 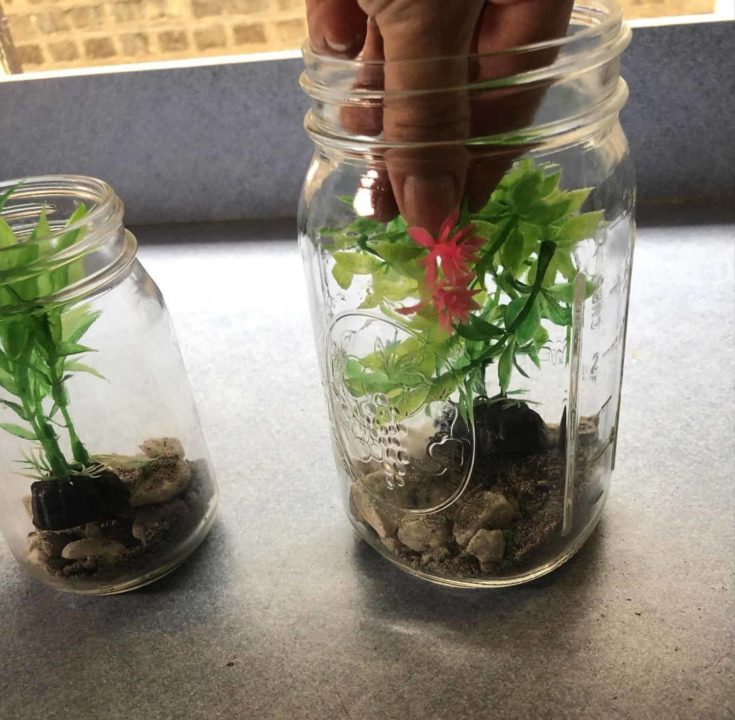 I did decide to only use one plant per jar but this is where you can let your imagination go wild. Looking back, I wish I would’ve put in much more to give the jars that deep seaweed look. 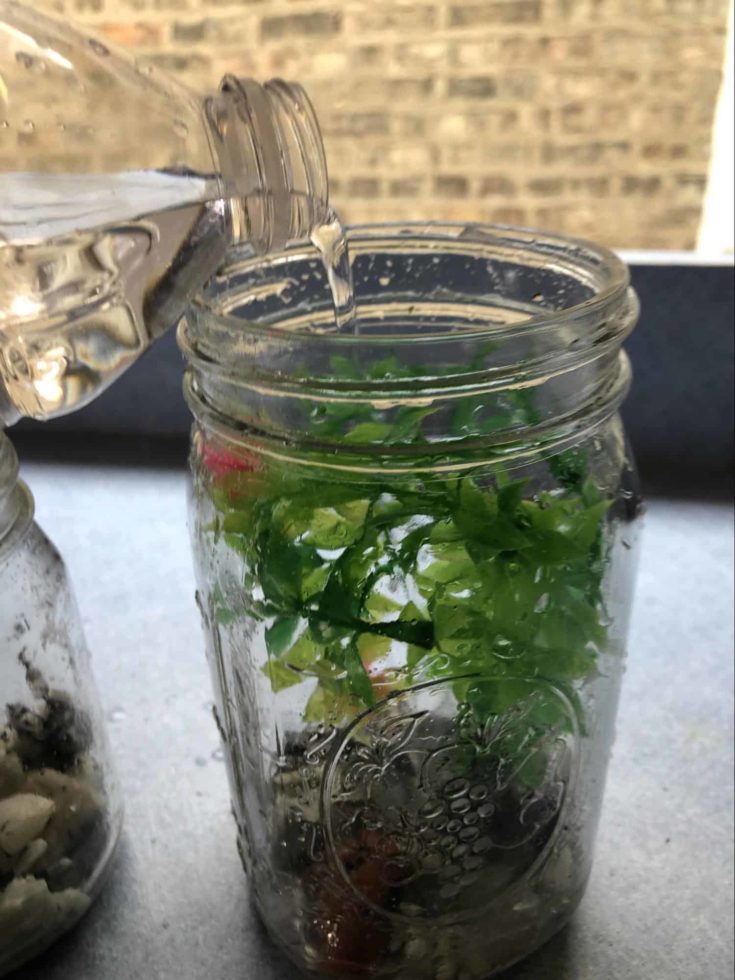 Fill your jars with water. This is the part I had to repeat several times. And, no matter how many times I rinsed my rocks they were filthy. If you want to use landscaping rocks I would suggest cleaning them first.

Also beware not to fill up the jars too high with water. You want to leave room adding fish and glitter plus there should be air space once you close the lid so you can shake it when you want to see the glitter float. 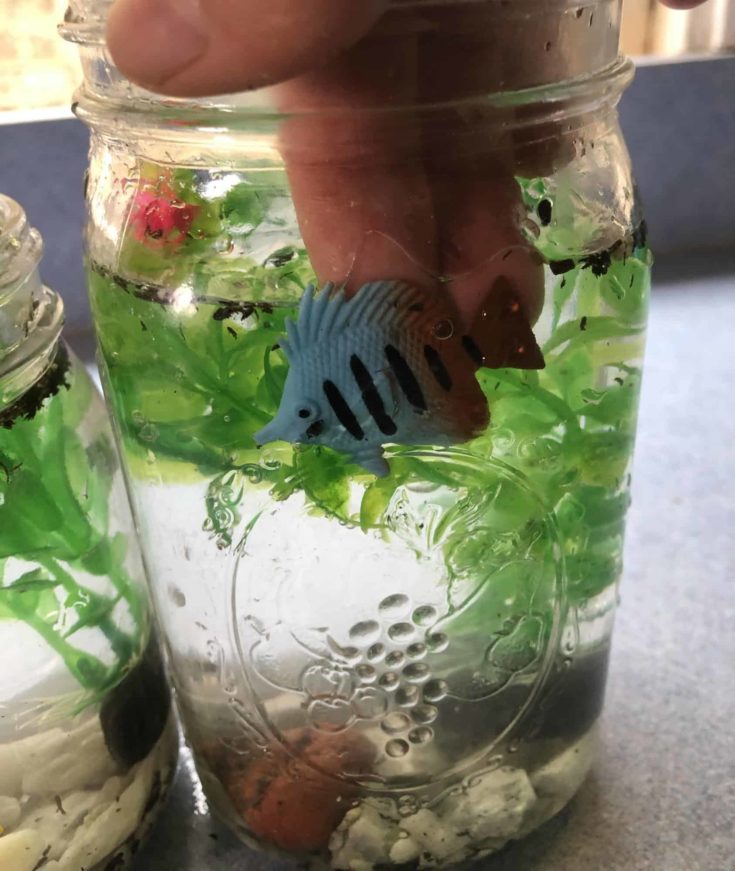 Time to add your fish. This was one of the most challenging steps in this task. The fish didn’t want to stay at the top and seemed to continually nose-dive into the rocks. I tried to put them in the middle of the plants to hold them up but they always found their way back to the bottom of the tank. 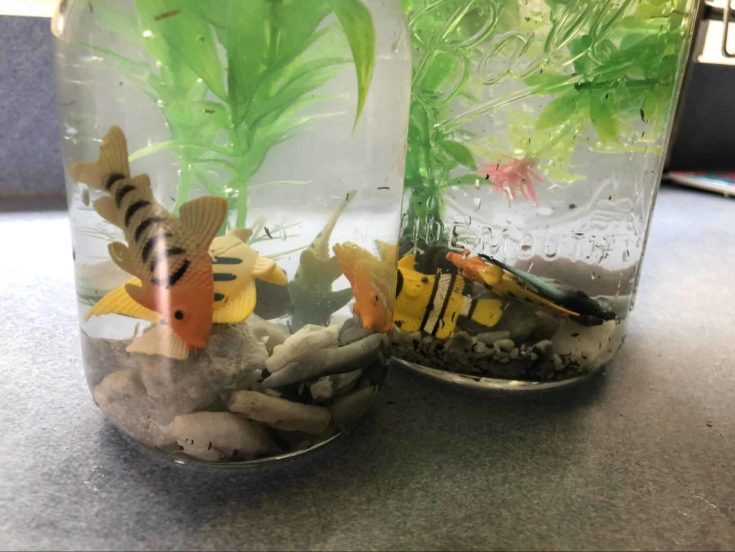 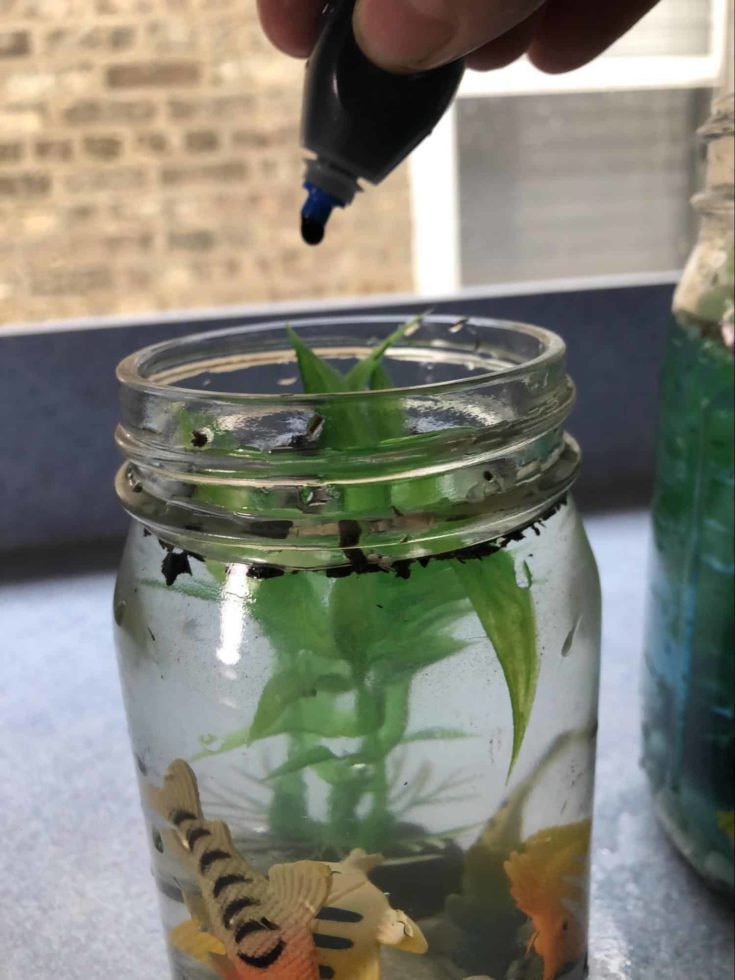 Add your food coloring. As with any type of coloring medium, the more you add to the water the darker your tank will become. I did a few drops for the larger jar but got out of control with the smaller jar and the results were water so dark I could barely see anything inside my aquarium. 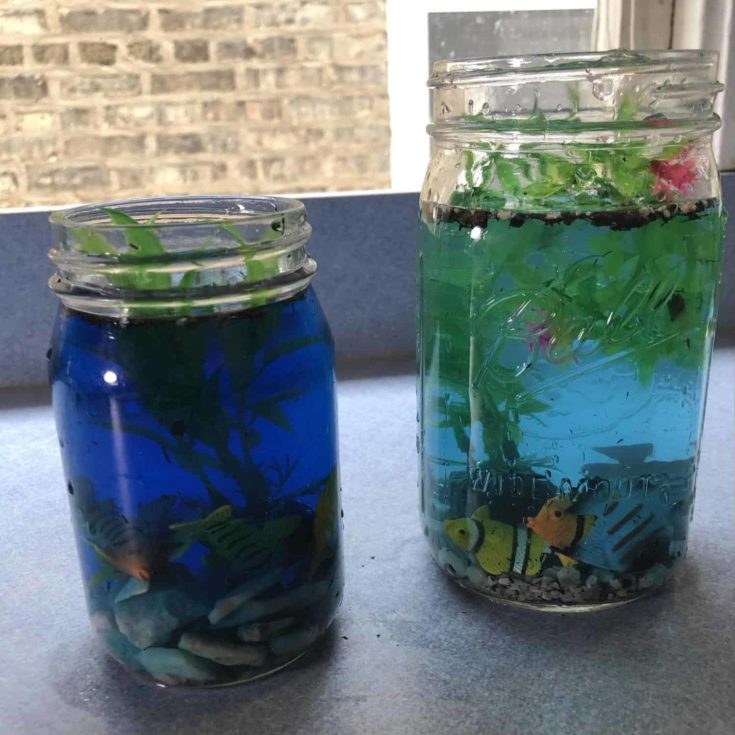 To fix that I dumped out some of the colored water and added clear until the water took on the tint I was looking for. 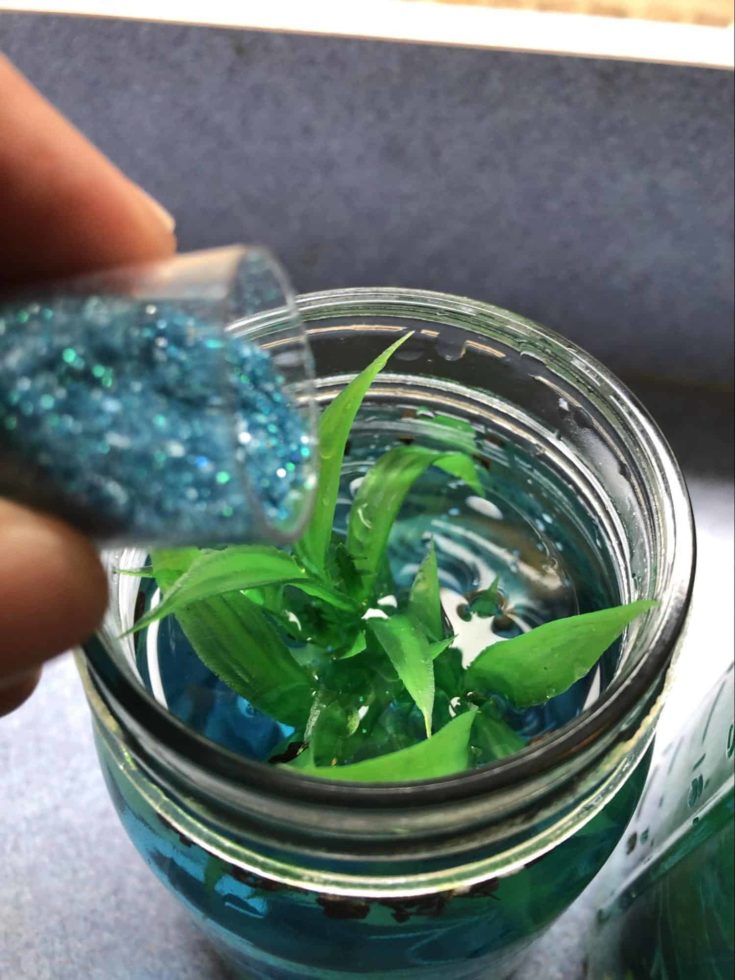 Add the glitter. I only added a little bit and when it came time to shake the jar I could barely see it. So don’t be shy with the glitter. Since this aquarium is fake you don’t have to stick with blue or aqua colored glitter. You can make an underwater world where the water is yellow with dangling purple glitter. The details are completely up to you. 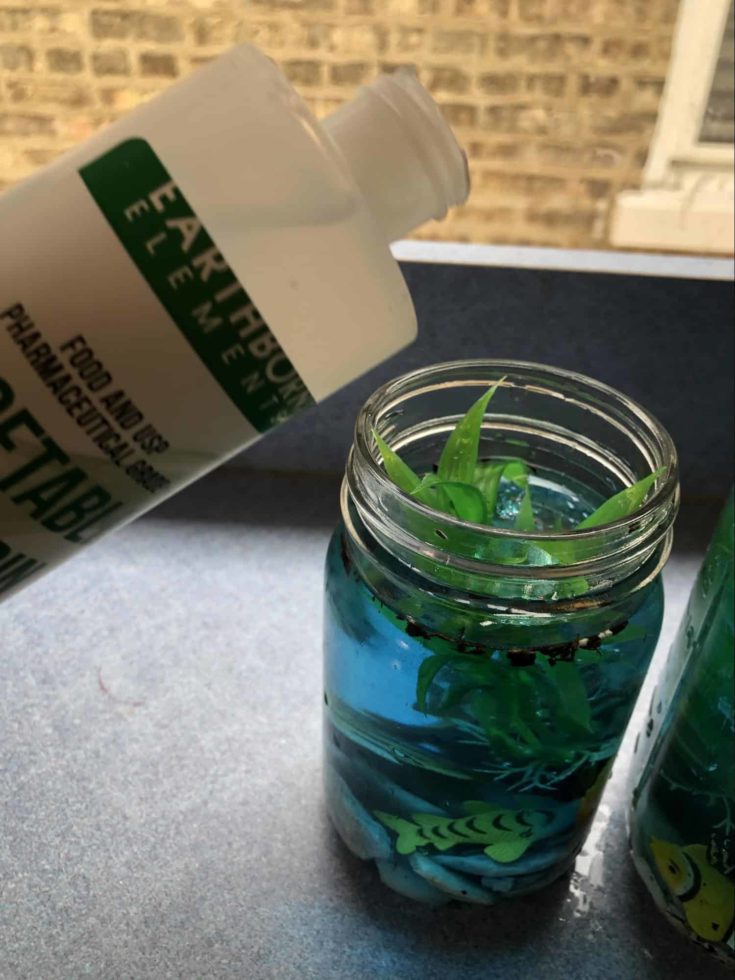 Now it’s time to add the glycerin. This additive is perfectly safe to use but not a must so, if you choose to eliminate this step it’s completely up to you. 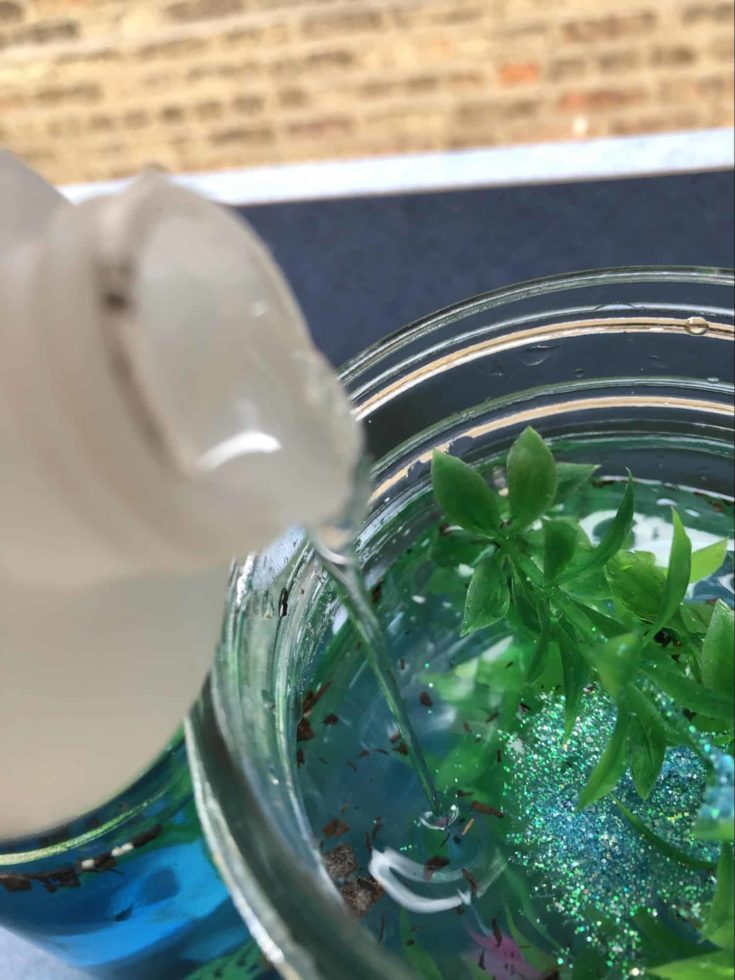 But, the instructions I read said that a few drops of glycerin were enough to help the glitter float in the water. I found that it took quite a bit more than that but I am not complaining. I had plenty and wasn’t planning on using it for anything else. 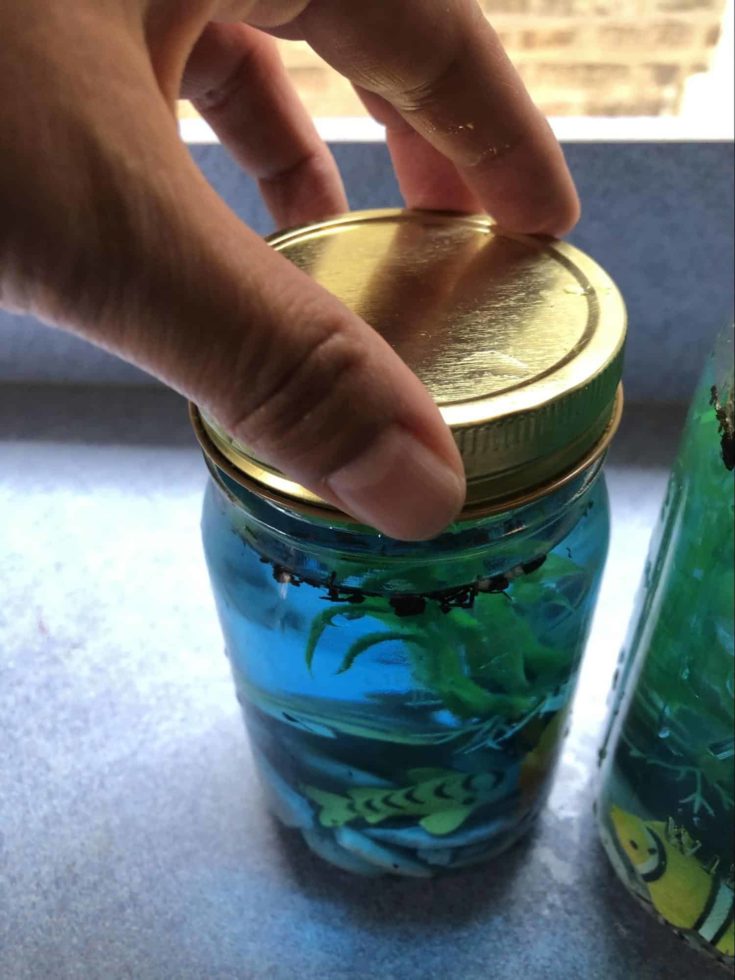 Seal that lid and then shake that jar. 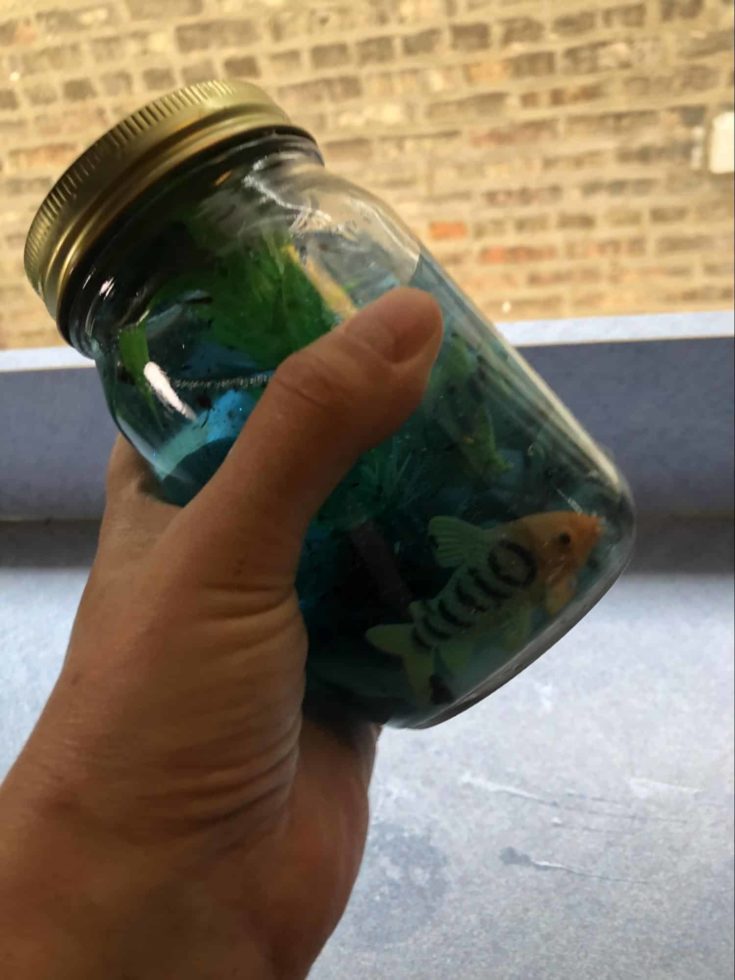 Ideally, the water should have moved around but, as I shook, I realized that I never glued anything down, and all my pebbles, my plant, my fish, and my glitter, went flying through the water and the contents of the jar looked confused when I was finished. 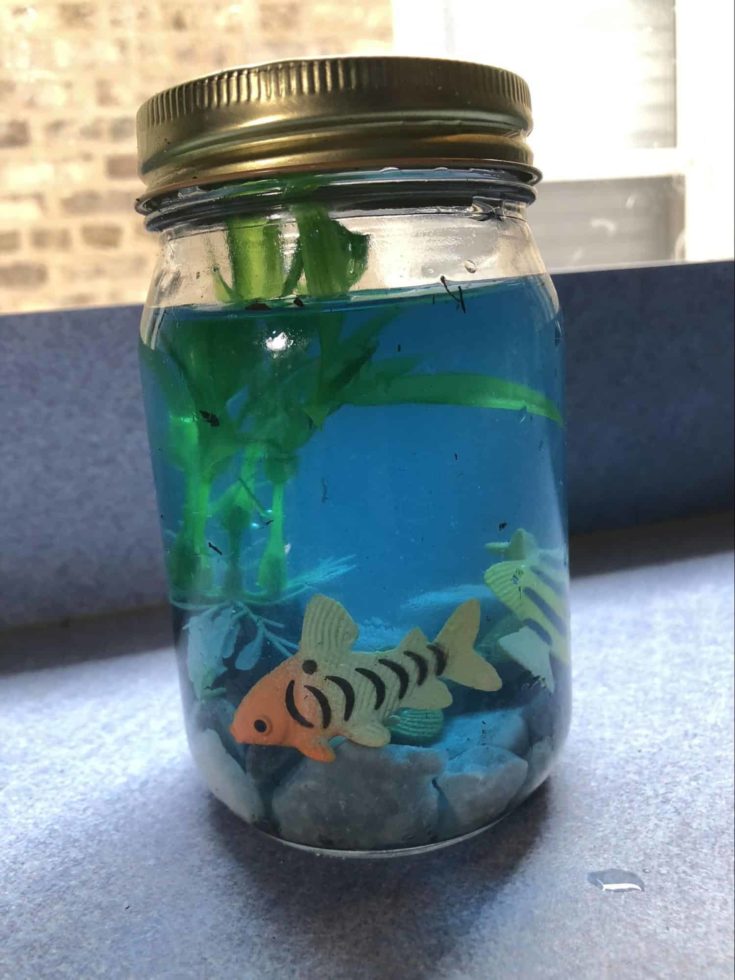 When I put the jar down the plant was upside down and the fish were buried under the pebbles. This is hardly what most people would want their fish tank to look like. I opened them up and stuck my hand in to fix the fish. This was the point where I learned the hard way about the water level.

While this project didn’t turn out as perfectly as I would have liked, I still love my new fake aquariums and plan on displaying them for quite some time. I would suggest finding a way to at least secure the plant so the only thing that moves around with the water when you shake are the pebbles, the fish, and the glitter.

We hope you enjoyed this post on how to make a pretend aquarium. Having fish is good for relieving stress and if you can’t have the real thing this might be a suitable substitution.